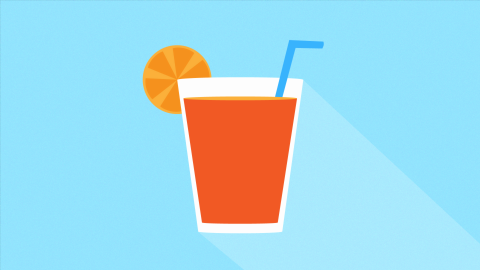 Any parent who has let their kid get away with having too much sugar knows the hyper madness that can ensue. Their off-the-wall energy before the crash isn’t the only issue — it’s not great for their health, either. But chances are your kids are getting much more sugar than you realize. That’s why the American Academy of Pediatrics (AAP) and American Heart Association (AHA) recently issued a joint policy statement recommending a range of public health regulations to help reduce the amount of sugary drinks consumed by children. “The high level snapshot is children who eat and drink too much sugar are at risk for not only tooth decay, which we’ve known for years, but now studies show a relationship to obesity, high cholesterol levels, high blood pressure, type 2 diabetes and heart disease,” says Dr. Christina J. Valentine, MD, RD.

According to the CDC, childhood obesity rates have more than tripled since the 1970’s and sugary drinks are one of main culprits. In fact, 17% of kids get their daily recommended caloric intake from sugary drinks instead of nutrient-dense foods. So exactly what is the danger of your kids drinking all that juice? “It really is a lot of sugar,” Valentine says. “The average child is drinking much more sugar than they should. If you have more than the recommended amount in a day it outweighs the benefit of vitamin C that might be in the juice — that’s why the AAP became very vocal about this for parents. As long as parents limit the serving sizes, it can be a helpful source of vitamin C if they are not eating fruit, but I always recommend natural sources.”

Of course, it’s not just fruit juice — sugary beverages, flavored milk, and teas with sugar are also to blame for adding too much sugar to children’s diets. “That’s where the majority of the sugar adds up in their diet; I believe it’s the accessibility and children’s desire to have those beverages,” Valentine says. “The guidelines say make sure your child doesn’t have more than 10% of their daily calories from sugar, but sometimes that’s hard for folks to translate what that means. In total, they should really have less than 10 teaspoons of added sugar, and avoid food and drinks with added sugar under age 2.”

Just one juice box could have several teaspoons of sugar in it, so if your little one is drinking two to three of those a day, that adds up to a lot of sugar. “If you line up teaspoons in a row across a day, you would never let your kids take the sugar jar and eat that,” Valentine says. “It replaces more nutritious drinks, like a glass of milk or water.” She always recommends over 2% milk for little ones, unless there is an unusual cholesterol problem in the family or child, since they need that milk fat to satisfy them and deliver nutrients. She also suggests a milk-based beverage that doesn’t have added sugar but instead added nutrients, like DHA and iron, that are missing in a child’s diet, like Enfagrow, of which she’s the medical director in North America.

Proceed with caution when giving your kids juice. “Parents see juice as an equivalent to a fruit serving, but parents need to know it has much more sugar than a serving of whole fruit,” Valentine says. Be sure to give your kids 100% fruit juice and always look at the labels and nutrition information to keep an eye out for sneaky added sugars. High fructose corn syrup, corn syrup solids, honey dextrose and sucrose are frequent culprits. Drinks aren’t the only places potentially packed with hidden sugar — processed foods like ketchup, baked beans, yogurt, dried cranberries, and cereal are other sources. “Anything that ends in ‘-ose’ can be added sugar they might not think about,” Valentine says. “When parents look on the package, it’s really important to check the total grams of sugar.” And don’t make the mistake of thinking that honey, brown sugar or molasses are any healthier, since sugar is sugar. “When your body processes it, having anything over the current recommendations really is problematic,” Valentine says. “Once your body takes it in and it goes through the digestive track and the body isn’t using it as energy, it is stored as fat or becomes a problem for blood sugar.”

According to the AAP, kids ages 1 to 3 years old should not have more than four ounces of juice per day; children ages 4 to 6 shouldn’t have more than four to six ounces; and kids over 7 no more than eight ounces. Babies less than a year old shouldn’t have any juice at all — just breast milk or formula. Parents may think that making their own fruit and veggie juice at home is a solution, but most of the fiber and other nutritional value is lost that way.

If your kids insist on something sweet to sip on, you can give them carbonated water with slices of fresh fruit to it to give it a natural flavor. “That is a very easy way to get that sense of having a soda, but not all that sugar,” Valentine says.