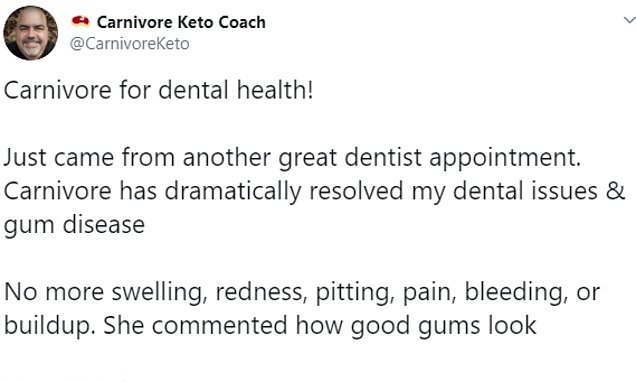 Trendy keto diet will NOT protect your teeth: Dentists urge followers of low-carb regimes to keep brushing twice a day – even if they are eating less sugar

Dentists have urged those on a low-carb diet to keep brushing their teeth – because they may wrongly think they don’t need to.

Dieters who cut back on carbs – such as carnivores and those following the A-list’s favourite keto – often brag of having better oral health.

They claim their gum disease and teeth cavities have vanished by cutting out foods such as bread, pasta and rice.

Dentists have now warned dieters that they still need to brush their teeth – even if they are eating less decay-causing sugar.

Regardless of what you eat, without brushing, a film of slime will occur on the teeth which can cause gum disease and ‘keto breath’.

The British Dental Association said: ‘In theory, there may be a reduced risk of tooth decay but good oral health also requires a balanced nutritious diet.

‘The advice, regardless of this diet or any other, is to brush teeth twice a day, with a fluoride toothpaste, including last thing at night.’

It comes after a US poll revealed nearly a fifth of people took nutrition advice from social media, a quarter of which had tried the keto diet. 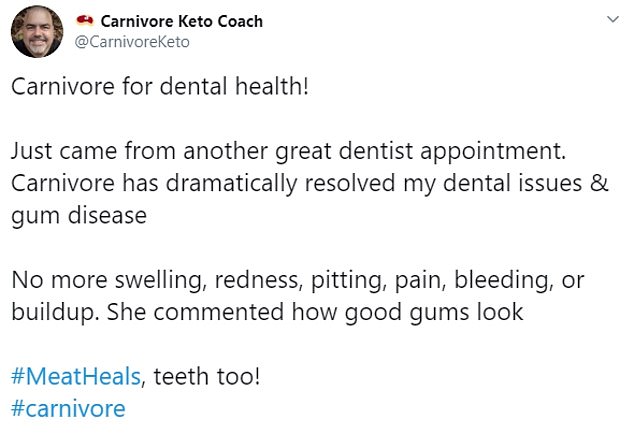 New Yorker Travis Statham, who advocates a carnivorous diet on CarniWay, wrote on Twitter: ‘If you look at any human on a meat diet and compare them to a grain eater – you’ll see a massive difference. I barely brush anymore’

People who cut back on carbs in favour of meat often brag of having better oral health since switching to keto or carnivore diets, such as this user

The Ketogenic diet defines a low-carb, high-fat way of eating.

Following this eating plan forces the body into a metabolic state, known as ketosis, which starves the body of carbohydrates but not calories.

Carbs are shunned in the keto diet as they cause the body to produce glucose, which is used as energy over fat.

Keto diets therefore lead to weight loss as they make the body burn fat as its primary energy source.

On the diet, followers can eat:

The keto diet allows high fat foods, such as nuts and seeds, fruit and vegetables. But only those that are low in carbohydrates.

Followers of the carnivore diet also skip carbs, instead sticking to just meat, fish, and other animal foods like eggs and certain dairy products.

Carbohydrates are broken down into sugars in the mouth. They work with bacteria in the mouth to begin the decay process.

But the BDA’s scientific adviser Professor Damien Walmsley told MailOnline this does not mean dieters following either regime don’t need to brush their teeth.

He said: ‘Irrespective of what you eat, plaque is a sticky biofilm that develops on teeth as a result of the bacteria that naturally live in the mouth.

‘It needs to be removed by regular tooth brushing, twice a day with a fluoride toothpaste, or it will lead to gum disease.

Such claims about low-carb diets being good for oral health can often be found on social media.

New Yorker Travis Statham, who advocates a carnivorous diet on CarniWay, wrote on Twitter: ‘If you look at any human on a meat diet and compare them to a grain eater – you’ll see a massive difference. I barely brush anymore.’

While Chris Donohue, a health coach based in the US, said: ‘Before carnivore, my teeth and gums were shot (gum disease, bleeding, pitting, excessive plaque, etc.) #Carnivore for the win!’

Some followers of low-carb diets say their beliefs are based on a book written in the 1939 – Nutrition and Physical Degeneration.

The book was written by Weston A Price, a Cleveland dentist and founder of London-based research institute National Dental Association. He died in 1948.

Mr Price traveled across the world analysing the oral hygiene and mouths of 14 isolated groups, including sequestered villages in Switzerland, Gaelic communities in the Outer Hebrides and Eskimos.

He wanted to understand why they had few cavities and naturally straight teeth, and found their diets were far from that of Western societies.

Many readers interpretation of his work say the groups’ diets were traditionally high in meat and low in carbs.

The British Dental Association said: ‘The advice, regardless of this diet or any other, is to brush teeth twice a day’ 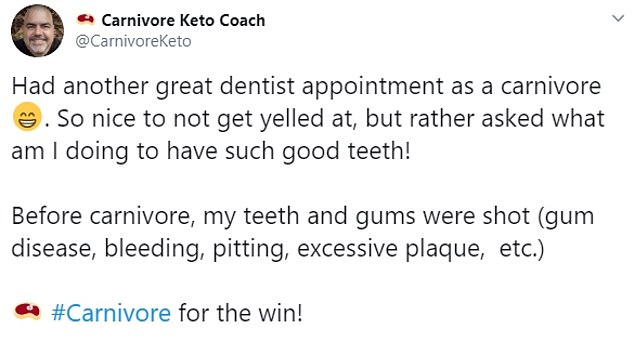 Experts say people who eat carnivore may wrongly believe it is ‘high meat’ that is protecting their teeth. But they are at risk of missing out on vital vitamins and supplements

However, this is not the case, according to Sally Fallon Morell, president of the Weston A Price Foundation.

She told MailOnline: ‘Just having meat is not the underlying factor for good teeth. These diets were all different. And some had carbs and grains.

‘Eskimos were definitely carnivore. But the diets in Australia had a huge variety of plants including grains and legumes.

‘The diet in Switzerland, where everyone had straight teeth and no-one had cavities, was sourdough, milk, cheese and porridge.

‘Eating meat wont protect you from cavities. You need dairy, fats and organ meats, seafood and dairy – the carnivore diet has no good source of calcium.’

Some scientists call Dr Price’s work a ‘masterpiece’, others say his findings were flawed.

Gareth Edwards, a dentist based in Bournemouth, said part of his training compared the teeth and diets of tribes in Papua New Guinea with Westerners.

He told MailOnline: ‘Keto or carnivore diets may well work in theory, especially when it comes to cavity prevention.

‘The second positive could be improved gum health due to an increase in omega 3 fats. These have been shown to reduce inflammation, which is product of gum disease.

‘However, in my opinion these are only theoretical because people will never stick exclusively to these diets. We all like a treat.

‘Say the person has a yoghurt or a smoothie, or goes for a few glasses of wine at the weekend then the process of decay could start.’

A shocking 44 per cent of Americans have taken heath, fitness and diet advice they found on social media, according to the results of a survey revealed by George Washington University last month.

Kourtney Kardashian told People last year she had a ‘really positive experience’ using the keto diet, despite suffering headaches and low energy for a couple of weeks.

The carnivore hasn’t gained so much media attention but is often likened to the paleo diet or ‘caveman diet’, which eliminates modern foods.

Celebrities who have reportedly enjoyed a diet rich in meats, fishes and vegetables, and low in wholegrains and legumes, include Gwyneth Paltrow.

WHAT IS THE CARNIVORE DIET? AND IS IT SAFE?

Followers of the carnivore diet typically eat just meat, with no carbohydrates, vegetables, fruit, grains or nuts. Some also have dairy and fish.

Experts argue followers of such an eating regimen miss out on fibre, antioxidants and vitamins. Lacking in these nutrients can affect a person’s immunity, digestion, circulation and cognitive function.

Eliminating most of the major food groups does cause many carnivore dieters to lose weight, however, it can also lead to constipation.

Due to meat being rich in protein and fat, many followers claim they feel fuller for longer, even though they are missing out on vital nutrients.

Experts claim followers of such a diet may initially feel better due to them cutting out sugar and processed food. Yet such eating plans are often unsustainable, causing dieters to feel frustrated and defeated.

Among those who take it one step further and eat raw red meat, they are putting themselves at risk of food poisoning if they become infected with bacteria like Salmonella.

Some experts have warned against the meat-only diet, with excessive amounts of red meat previously linked to bowel cancer.

The NHS states: ‘Red meat – such as beef, lamb and pork – is a good source of protein, vitamins and minerals, and can form part of a balanced diet. But eating a lot of red and processed meat probably increases your risk of bowel (colorectal) cancer.

‘That’s why it’s recommended that people who eat more than 90g (cooked weight) of red and processed meat per day cut down to 70g, as this could help reduce your risk of bowel cancer.’