Size 10 former bulimic, 27, left in agonising pain by her 32GG breasts is told to LOSE WEIGHT for an NHS boob reduction despite begging for the life-changing surgery for ten years

A size 10 nursery worker living in agony because of her size 32GG boobs claims she has been repeatedly denied a breast reduction by the NHS.

Jenna Todd, 27, suffers excruciating pain because of her chest but doctors have just given her painkillers and told her to lose weight over the past 10 years.

She even developed the eating disorder bulimia, in which sufferers make themselves sick or take laxatives to try to avoid gaining weight.

Ms Todd says she has spent the last ten years begging medics for reduction surgery but she has been rejected, despite meeting criteria listed on the NHS website.

NHS Choices says the availability of surgery depends on where people live, but it may be considered for women who suffer back pain or psychological distress.

But after reportedly having more than 100 appointments in the last ten years about her breasts, Ms Todd has been rejected for the life-changing surgery twice.

The nursery worker says doctors have continued to tell her her chest will get smaller if she keeps losing weight – despite being only 5ft 6inches tall and weighing 9st 9lbs. 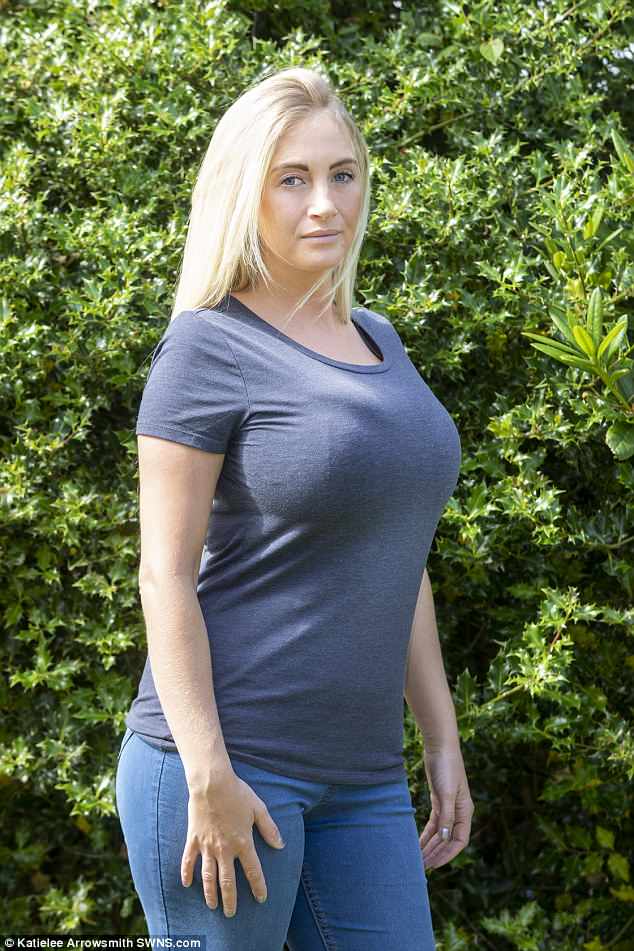 Jenna Todd, 27, says her 32GG breasts have caused her pain and embarrassment since she was at school

Ms Todd, who lives in Glasgow with boyfriend James Harvey, 27, said while some girls dream of having a big bust, it’s not the same as having ‘naturally large breasts’.

She said: ‘The back pain I experience every day is excruciating but I have been left to feel like this is how I should feel.

‘I have been the target of every lad joke from the age of 13, leaving me embarrassed and insecure.

‘I just want to have a day where I have no pain and don’t change my outfit over and over again because I can’t hide my chest without making myself look larger and making me feel even worse.

‘I’m exhausted from trying everything from exercise, physiotherapy, diets anything advised making no difference to my pain.’

Ms Todd says she was bullied at school and was even given the nickname ‘T-O-Double-D’ by cruel classmates.

She added: ‘I have had a big chest since I was young. I was bullied a lot in school and felt quite depressed because of it.

‘Boys at that age don’t think they are bullying you, but the constant comments were hard to take.

‘Because of my last name, I got the nickname ‘T-O-Double-D’ – it was so horrible.’ 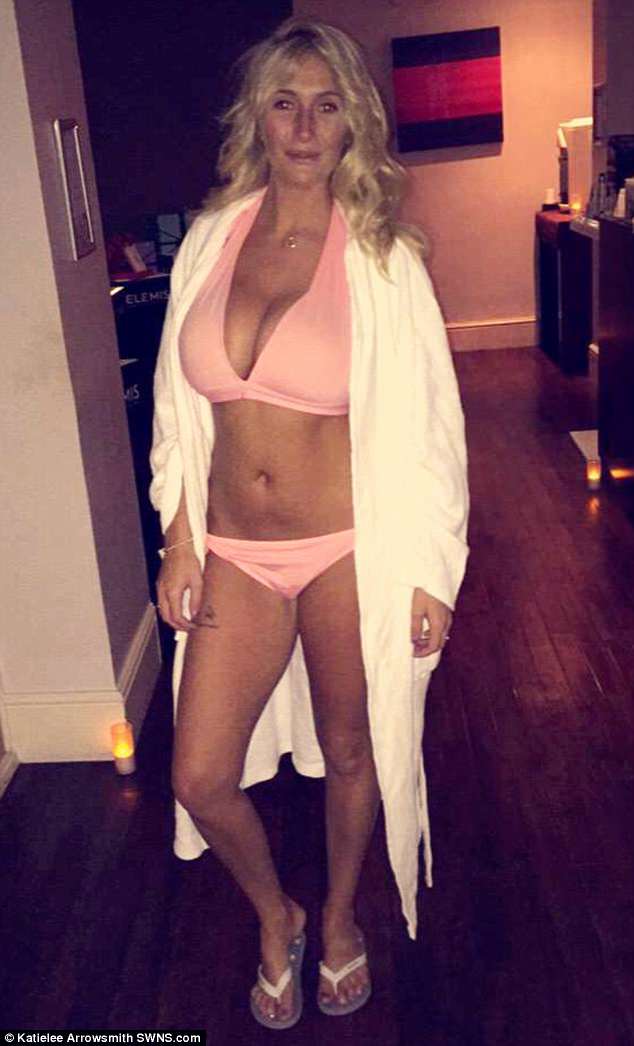 Ms Todd says while some women might wish they had larger breasts, hers are so big they cause her daily pain and boys gave her cruel nicknames at school 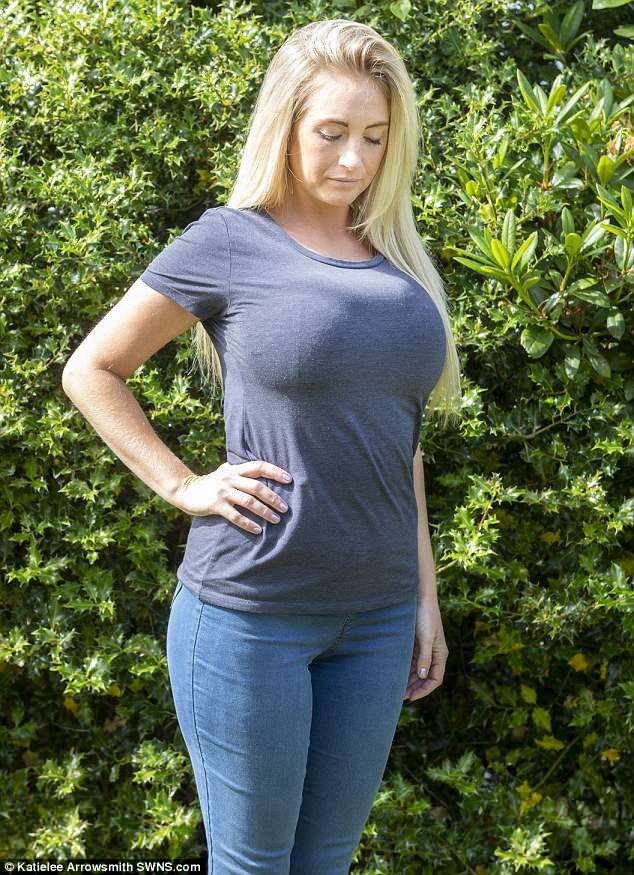 Despite claiming to have visiting doctors 100 times, Ms Todd says none will offer her surgery and have told her to go to the gym to strengthen her back

Ms Todd went to her GP with her mum at 16, when her back problem began, to try and get referred for a reduction.

She said: ‘I went to the doctors with my mum when I was 16 to describe how I was feeling, the pain I was having in my back and that I was getting bullied badly at school.

‘My back was constantly sore, I didn’t want to take part in sport and I always felt embarrassed.

‘But the doctor said I was too young for major surgery and even said some girls would kill to be in my situation.

‘He said I should try and lose some weight and it should reduce the size of my chest.’

Between the ages of 17 and 18, Ms Todd went on a diet and dropped down to just 8st 5lbs – but her chest stayed the same size.

She added: ‘I lost over two stone and never dropped a cup size – it was like I couldn’t do anything right.

‘After that, I went back to my GP to try again and told him my back pain had gotten much worse.

‘I just kept being given painkillers’

‘But I just kept being given strong painkillers, like codeine, co-codamol, and naproxen and told to try physio and go to the gym to help my back. 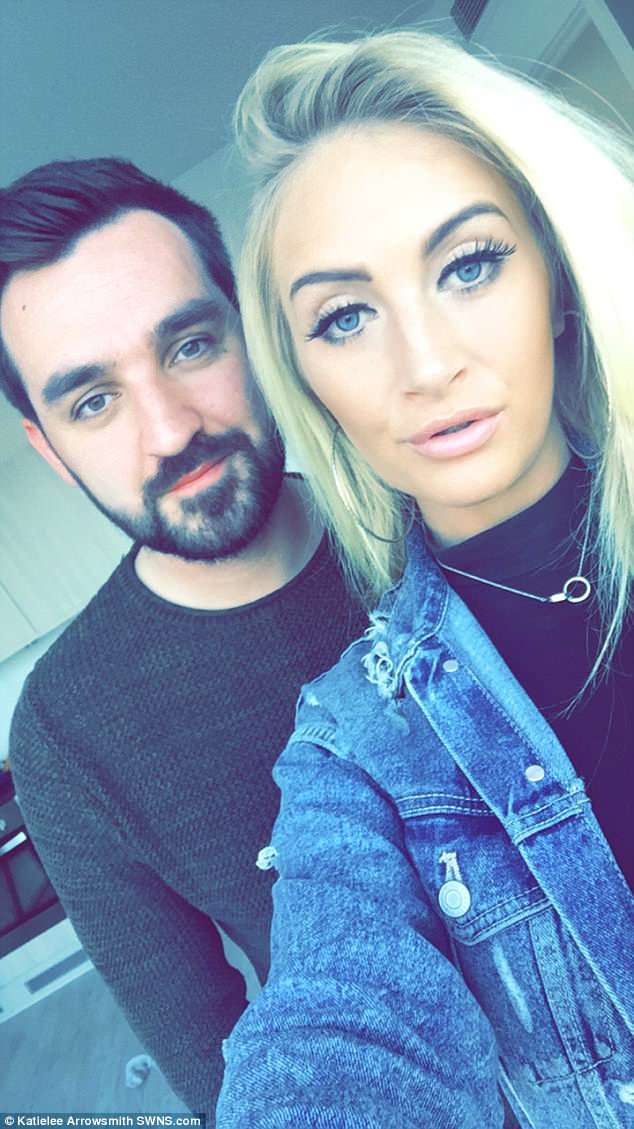 Ms Todd lives in Glasgow with boyfriend James Harvey, 27, and says she struggles to buy bras that fit her unusual proportions

‘I started going to the gym a lot. My dad was a bodybuilder so he helped me try and do exercises to strengthen my back, and I used to get sports massages too.’

When she was 18 Ms Todd was finally referred to Glasgow Royal Infirmary to see a plastic surgeon but says she was told to talk to a psychiatrist first.

CAN YOU GET BREAST REDUCTION SURGERY ON THE NHS?

Breast reduction surgery is done to reduce the size and weight of a woman’s breasts, and involves removing fat, tissue and skin from the chest.

Genes, hormones and body shape and size may determine how large a woman’s breasts are – usually they are in proportion to the rest of the body but some women’s may be exceptionally large.

The NHS will not usually do a breast reduction for cosmetic reasons.

However, it may be considered if a women is experiencing effects like backache, neck or shoulder pain, rashes or skin infections beneath the breasts, or psychological distress.

The NHS may also consider the size of a woman’s breasts, their weight, their age, whether they smoke, and whether other solutions have been tried.

She said: ‘I explained I had tried to lose weight as the doctor said, how I felt about my chest, and the pain I was in,’ she said.

‘After half an hour she had decided I had body dysmorphia.

‘I felt happy with the rest of my body’

‘I knew I didn’t – I felt happy with the rest of my body; it wasn’t in pain. I just wanted to have my breasts reduced to help with the pain in my back.

‘So I was denied the surgery because they claimed I had body dysmorphia, yet they didn’t offer me any help or counselling for it.

‘The next two years I was back and forward to the doctor still saying the same thing about my back pain, but he only ever offered me a constant supply of painkillers.

‘I started to think they were right and began telling myself if I just keep losing weight maybe they will get smaller.’

‘I got an eating disorder because no one would help me’

During this time Ms Todd developed bulimia, an eating disorder characterised by binge eating followed by a purging of the food – usually vomiting or taking laxatives.

Ms Todd said: ‘I was trying to bring up everything I ate, and once my mum and dad caught on to it I started taking laxatives – around two a day.

‘I believe I got an eating disorder because no one would help me.

‘My doctor never commented on my weight loss, it was like he was totally oblivious to how I looked or what was happening to me. 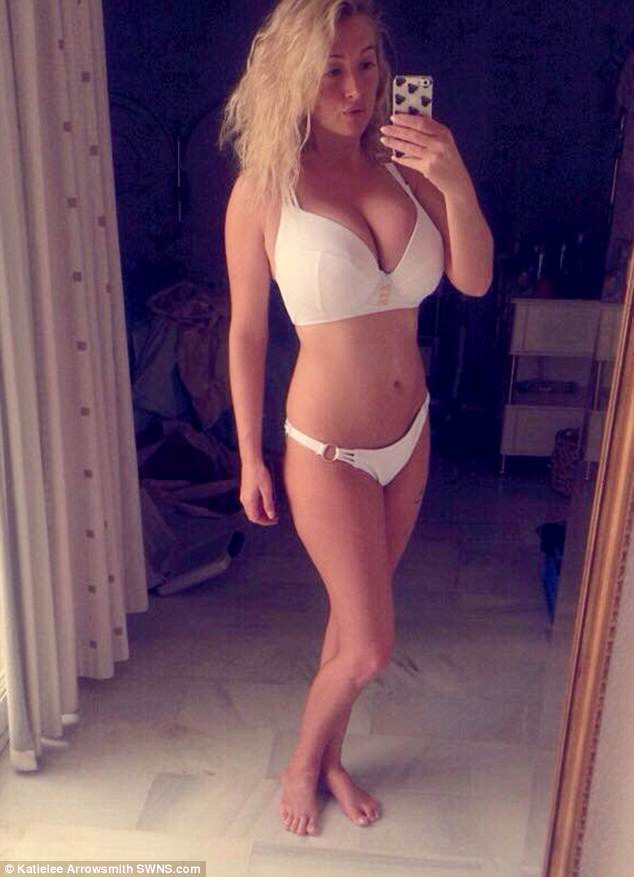 Ms Todd says she developed eating disorder bulimia because she thought losing weight could shrink her breasts and, at her lightest, weighed just eight stone.

‘I suffered on and off with bulimia until I was 25 and I never got any help from anyone other than my mum and dad. At my lowest, I was about eight stone.’

At 21, Ms Todd was referred back to Glasgow Royal Infirmary and got to see plastic surgeons.

She says they took pictures of her without her bra on to see the size difference in her body and noticed her right breast was significantly bigger than her left.

But despite noting this Ms Todd claims they refused her for surgery saying her body is in ‘perfect proportion’. 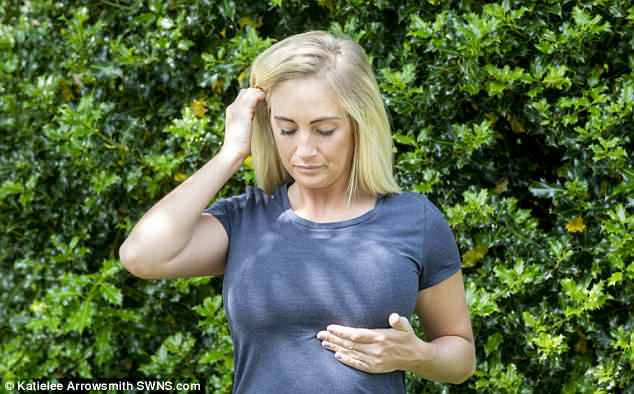 ‘Another couple of years went by and I was still going to the GP about my back pain but they just kept saying it was all in my head and I had an obsession,’ she added.

‘I’ve had about 100 doctors’ appointments about my chest’

‘They just made me feel like I was stupid and complaining about nothing.

‘I have had about 100 doctors’ appointments about my chest in the last ten years. I feel like I spend most of my life there.’

And Ms Todd, who struggles to find bras to fit her, says it’s her dream to be able to walk into a ‘normal shop like Primark’ and buy a bra.

She said: ‘I have been left with dents in my shoulders from bras that don’t fit and it’s a nightmare to find any that do.

‘When I find a bra that fits me I wear it to death, so I end up spending between £50 and £70 each month on bras from places like Bravissimo and Boux Avenue.

‘I struggle to find bikinis that fit me – I spend about £200 a year buying specialised ones.’

‘This patient did not meet the criteria for surgery’

According to the NHS Choices website, some areas will fund the surgery if you meet certain criteria, which may include suffering from back and shoulder pain or psychological distress.

A spokeswoman for NHS Greater Glasgow and Clyde said: ‘The NHS does not undertake procedures which are requested for cosmetic reasons.

‘Eligibility is based on specific Scotland-wide criteria.

‘This does not include back pain as breast reduction is not a useful primary treatment for breast, back, neck or shoulder pain.

‘This patient was reviewed by the vetting panel and unfortunately did not meet these criteria for surgery.’