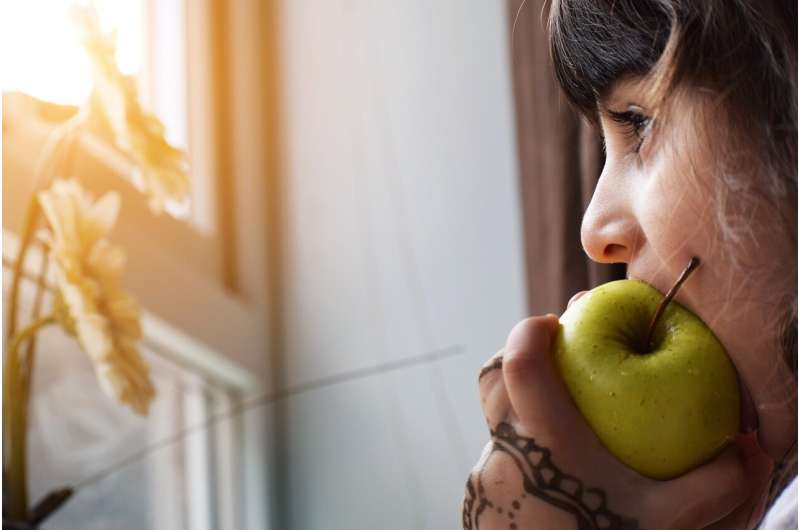 Most people are familiar with using food as a way to get through a trying time.

Known as emotional eating, for some it can be a perfectly appropriate strategy for managing hard feelings, but for others it also can become a problematic way to cope.

A team from the UO College of Education looked at the interplay between the way parents feed their children and emotional eating by parents and children, as well as the influence the parent’s gender has on that association. Their goal was to better understand how child emotional eating develops and inform interventions that aim to prevent such behaviors from becoming unhealthy.

The study surveyed Oregon parents and asked how often they and their child engage in emotional eating. The researchers then explored what roles three different feeding practices parents typically use with their children might play.

“We were really interested in comparing different ways that parents feed their children and whether those feeding practices accounted for some of the link between parent and child emotional eating,” said Shaina Trevino, a graduate student in the College of Education who was the lead author of the study. She was joined by Health Promotion Initiative faculty members Nicole Giuliani, Nichole Kelly and Elizabeth Budd.

And even though that link has been previously established, the study is the first to examine the role each feeding practice might play in the emotional eating as well as the role of a parent’s gender.

“Because we did have this sample of both mothers and fathers, which is kind of rare in this type of literature—a lot of the literature is only on mothers—we really wanted to dig into that a little bit more and look at how gender influences those relations, too,” Trevino said.

They discovered that, overall, restrictive eating was the only feeding practice that linked parent and child emotional eating.

“We actually found that restriction accounted for the relationship of parent-child emotional eating above and beyond those other factors,” Trevino said. “That was just unexpected.”

And when it came to mothers, restricting their children’s food intake and a mother’s own emotional eating were the key factors influencing kids’ tendency to eat emotionally.

“For mothers, it’s their emotional eating possibly being modeled to the children, or that children are maybe around them more or just are seeing it more often,” Trevino said.

For fathers, however, all three types of eating practices were found to play a role in emotional eating for their children.

This study, which surveyed 324 mothers and 86 fathers, is more of an early exploratory look at the issue because of the lack of participation by fathers.

“The main takeaway of the study is that emotional eating and feeding practices are operating differently for both mothers and fathers, and that really should influence the research in this area,” Trevino said.

Another finding that jumped out at Trevino and should be further explored is that father feeding practices seemed to be more important in the relationship between child emotional eating and parent emotional eating than mothers, while mothers have had the majority of the spotlight in this area.

“I think this sheds an initial light on the fact that fathers matter, too, and maybe even more in this context of parent-child emotional eating and feeding practices,” Trevino said.

“There are a lot of caveats that we need to take with these data,” Giuliani added. “Because it’s hard for us to know why there are these differences, If it has to do with the sample itself or if it has to do with something larger about how eating and feeding practices influence child eating behavior in mothers versus fathers.”

And not all emotional eating is bad, Kelly noted. The issue arises when people over-rely on it as a way of dealing with emotions.

Trevino said the research marks another step toward heading off any unhealthy behaviors before they take root.