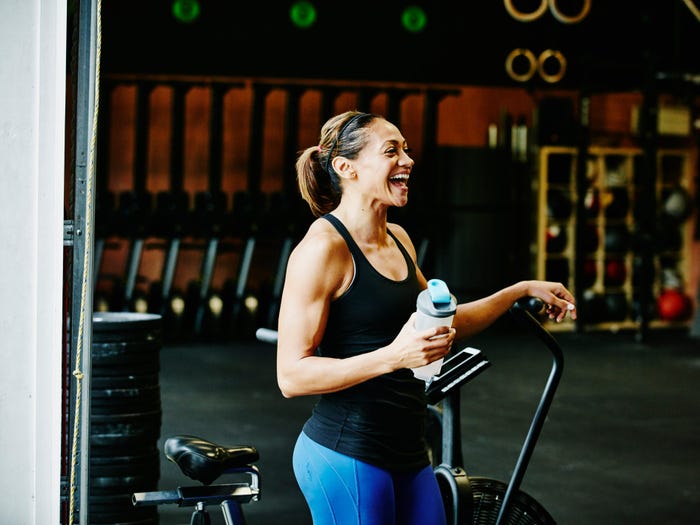 There's more evidence that working out may boost your mood and stave off psychological ailments, particularly in the long term.

Poor physical fitness may be associated with greater likelihood of depression and anxiety over time, according to a study published November 11 in BMC Medicine.

Researchers from two London universities and Massachusetts General Hospital looked at data from 152,978 adults in the UK, aged 40 to 69, over seven years to compare measures of fitness with symptoms of mental health.

They found that people with greater muscular and aerobic fitness at the beginning of the study were more likely to report good mental health during follow-up, after adjusting for lifestyle variables like diet, income, and chronic illness.

Participants with the lowest measures of fitness were nearly twice as likely to report depression and 60% more likely to report anxiety, compared to their peers who scored highest on the fitness tests, according to the data.

These rankings were based on an endurance session on a stationary bike and grip strength test. This study was unique in using these objective measurements of fitness, instead of self-reported data on exercise habits. That helped researchers more accurately assess the link between mental health and fitness, since people have a tendency to either over- or under-estimate how much they work out, research shows.

A limitation of this study is that while it found a link between poor fitness and poor mental health, it doesn't directly show that a lack of exercise causes depression or anxiety. There could be other possible reasons for the association — people with mental health symptoms may have less time and energy to work out, for instance.

More research is needed to better understand how this information might have practical uses to help people with depression and anxiety.

There's good evidence that working out has psychological benefits

Previous research has shown that working out may alleviate some symptoms of depression and anxiety by releasing endorphins, feel-good hormones that reduce stress and boost mood.

A study last month found that elderly people who did regular high-intensity exercise had better measures of mental health.

Working out can also improve self-esteem, and people who exercise are less likely to be lonely or socially isolated, evidence suggests. Mental illness is complex, but social support, self-esteem, and coping strategies like exercise are important factors in long-term psychological resilience and lower risk of symptoms.

Taken together, all these studies indicate that providing people with resources to work out could be a strategy to address rising rates of depression and anxiety.

Researchers found that overall fitness was more strongly associated with mental health outcomes than strength or endurance alone. That suggests a well-balanced workout plan, with a mix of exercise styles, may have the most benefits.

HIIT workouts are linked to better mental health and longer, healthier lives, according to a new study

A gym trainer exposed 50 athletes to COVID-19, but no one got sick — because one member is a ventilation expert who redesigned the room's layout

People who take multivitamins say they feel healthier, but it may just be a placebo effect, a study found