More than 20 people go blind a month in the UK due to delayed and cancelled hospital appointments, damning report by MPs finds

Up to 22 people go blind a month in the UK due to delayed and cancelled hospital appointments, new research suggests.

More than half of people suffering from treatable conditions such as wet age-related macular degeneration (AMD) and glaucoma, have had an appointment postponed or cancelled at least once, according to a report by the all-party parliamentary group (APPG) on Eye Health and Visual Impairment.

Some 77 per cent of patients claim this caused them stress or anxiety, while 54 per cent believe it had a negative effect on their quality of life, the research adds, which is being presented at a parliamentary reception for MPs today.

Eleanor Southwood, chair of the Royal National Institute of Blind People, said: ‘Nobody should lose sight from a treatable condition simply because their eye clinic is too busy to provide care in a clinically appropriate timescale.’

Almost 7.6 million eye-related appointments took place between 2016 and 2017 in England, which is more than 10 per cent higher than four years ago.

Previous research suggests eye conditions are increasing due to more people suffering from type 2 diabetes, as well as them living longer. Glaucoma is an eye condition that occurs when a person’s optic nerve is damaged by the pressure of fluid in the eye.

It affects around 3.3 per cent of people over 70 in the UK. Approximately 1.9 per cent of adults over 40 suffer in the US.

Most people’s peripheral vision is the first to be affected, which is less sensitive than their central vision and therefore the symptom is easier to miss.

Due to a lack of symptoms, regular eye appointments are important for early diagnosis.

The condition can also occur as a result of another eye condition, an injury or medication.

Laser treatment or surgery may be required.

‘All too often my appointments are cancelled’

According to the APPG, the NHS needs to prioritise eye health in order to avoid appointments being delayed or cancelled.

Lord David Blunkett, a member of the APPG for Eye Health and Visual Impairment inquiry, who is blind, said: ‘Urgent action is needed to ensure eye care services meet the needs of patients now and in the future. World class treatments are now available for conditions like wet AMD.

‘It is vital patients have access to them at the right time to save their sight.

‘We have been able to identify a series of recommendations which will help improve capacity in eye care. We are calling on the Secretary of State for Health and Social Care to include eye health in the NHS England mandate.’

Michael Tupper, who shared his experiences in the report, added: ‘I’ve got glaucoma and it’s vital for me to see the consultant ophthalmologists at my hospital’s eye clinic regularly and promptly to make sure my treatment is working.

‘All too often my appointments are delayed and cancelled, which causes me great stress and anxiety about my sight deteriorating.

‘After a recent appointment the pressure in one of my eyes increased quite considerably.

‘If I hadn’t been given a timely follow up appointment – which has happened in the past – I could have had very serious problems.’ 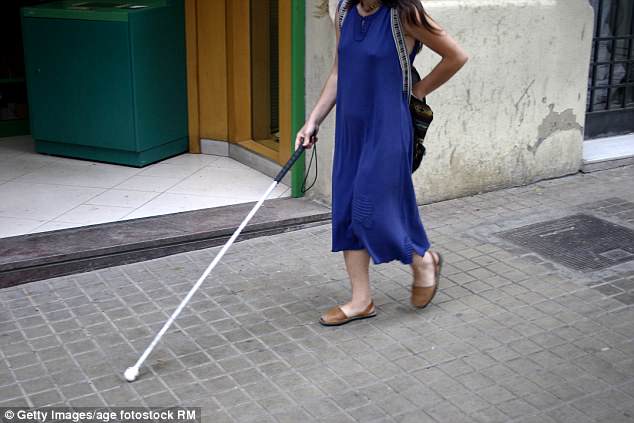 More than half of people suffering from treatable conditions such as wet age-related macular degeneration and glaucoma, have had an appointment postponed or cancelled (stock)

When implanted at the back of the eye of people suffering from dry AMD, all experienced improved or stabilised vision, a study by the University of Southern California found.

One woman, aged 69, was even able to read 24 letters on an eye chart after having the device fitted, compared to just seven before, the research adds.

The device involves placing a wafer-thin patch coated with healthy embryonic retinal cells on the tissue near the optic nerve, which sends impulses to the brain where images are formed.

One year on, the patch stabilised the disease in all of the participants’ treated eyes, while those that had not received the patch continued to deteriorate.

Two of the participants were better able to maintain their vision on a single object a year after the implant was fitted.

WHAT IS AGE-RELATED MACULAR DEGENERATION?

It does not cause total blindness but can make reading and recognising faces difficult.

Its exact cause is unclear but has been linked to smoking, high blood pressure, being overweight and a family history of the condition.

There are two types of AMD:

Wet: Develops when abnormal cells grow into the macula, which is at the back of the eye and detects light. These cells leak blood or fluid that causes scarring and rapid loss of central vision.

Dry: This is the gradual deterioration of the macula as retinal cells die and are not renewed. This usually develops over many months or years, with people often being able to carry on as normal for some time. Up to 15 per cent of dry AMD sufferers develop the wet form of the condition.

Symptoms for both include:

Wet AMD can be treated if caught early. This involves injecting drugs into the eye to stop the growth of abnormal blood vessels. Laser treatment may be required.

There is no treatment for dry AMD.