A diet high in fibre could protect against flu by boosting the immune system, a study has found.

Researchers say consuming more of the nutrient, which is found in oats, brown rice and raspberries, could increase the body’s antiviral immune response.

Other benefits of a high-fibre diet include a reduced risk of heart disease and diabetes, but researchers now hope it could help combat flu.

Influenza is one of the most common viral infections in the world, affecting up to 20 per cent of the world’s population each year.

High levels of dietary fibre reduce the effects of asthma and allergies on the lungs while also making the body more resistant to viruses, say scientists at Australia’s Monash University. 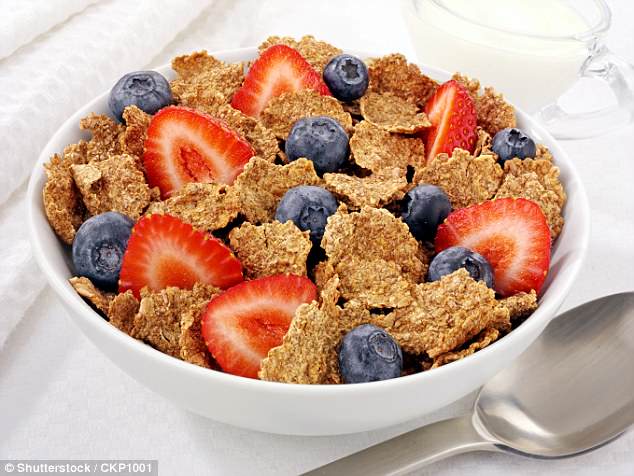 Bran cereals are a good source of dietary fibre, which is known to reduce the risk of heart disease and diabetes, and scientists now believe it could protect people against flu as well

Researchers carried out tests on mice and found they are protected from being infected with flu when they consume more fibre.

The team were aware dietary fibre may be beneficial to people with inflammatory lung conditions, such as asthma or allergies, but were worried it would ‘switch off’ other immune responses.

They found that while it reduces swelling in the lungs it also activates white blood cells which boosts the mice’s antiviral immunity, protecting them from influenza.

The study was published in the journal Immunity.

The modern Western diet could be reducing the body’s ability to protect against infections because it is high in sugar and fat but low in fibre, the scientists said.

Flu is a common virus and most people are able to recover on their own but some people, such as those with weakened immune systems and the elderly, can have more serious symptoms.

‘We typically find that a certain treatment turns our immune system either on or off,’ says senior study author Benjamin Marsland.

A need for human research

Marsland has called for more research into how much fibre, and what type of fibre, would be most effective in boosting viral immunity in humans.

WHICH FOODS ARE HIGH IN FIBRE?

The following foods are a good source of dietary fibre:

Dietary fibre comes from plant-based carbohydrates that are not able to be digested in the small intestine so make their way to the large intestine or colon.

Marsland and his team plan to research how changes in the diet can change the immune system, particularly in the lungs.

‘There is a need for carefully designed and controlled studies in humans to address how these findings could benefit people with asthma, or for preventing viral infections,’ Marsland says.

‘We should also look further into these pathways as a means of supplementing other therapies or enhancing vaccine efficacy.’

High-fibre diet can protect against heart disease, diabetes and cancer

Previous research has concluded that higher dietary fibre intake is associated with a lower risk of death including of cardiovascular disease, diabetes and cancer.

Dietary fibre helps to maintain good heart health by reducing levels of cholesterol in the blood, which is considered to be a risk factor for heart disease.

Inflammation also contributes to disease and research has shown fibre may have a role to play in modulating the immune system and so reducing disease risk.

There is good evidence to show that a diet high in fibre may help to prevent Type 2 diabetes.

For those with the condition, eating a diet rich in fibre can help to balance blood sugar levels.

Fibre also helps to bulk out the diet and promote fullness that may help with weight loss, which can help with the condition.