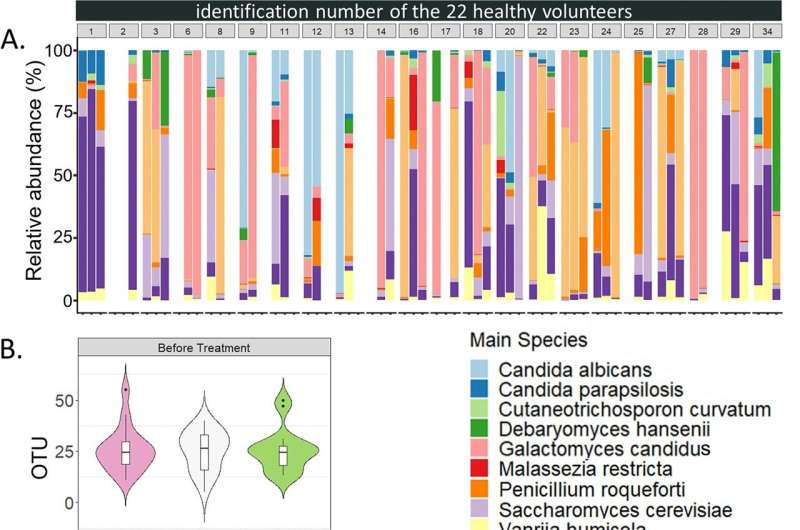 Antibiotic treatment disrupts the balance of beneficial and harmful bacteria in a person’s gut. That disruption can lead to the overgrowth of fungal species in the gut mycobiota, including the common intestinal yeast Candida albicans. However, researchers only have a limited understanding of the underlying mechanisms.

This week in mBio, in a first of its kind study on human subjects, researchers in Europe report on how treatment with a common beta-lactam antibiotic led to significant changes in C. albicans in patients. Notably, they found that not all patients responded in the same way, and the degree to which C. albicans populations increased depended in large part on the microbiota of the individual. That variation suggests that the risk for C. albicans overgrowth, in response to antibiotic treatment, is not the same for everyone.

“This study shows that the situation is more complex than previously thought, and with certain antibiotics such as beta-lactam, this increase in C. albicans varies from one person to another,” said microbiologist and senior author Marie-Elisabeth Bougnoux, M.D., Ph.D., at the Institut Pasteur in Paris, France.

Researchers have long studied the effects of antibiotics on the gut microbiota, but less attention has been paid to the mycobiota, or collection of gut fungal species. The authors of the new study point to 2 reasons.

“First, the mycobiota is difficult to study with metagenomics techniques,” said Margot Delavy, a Ph.D. student at the institute and first author on the paper, “and second, the concentration of fungi is much lower than that of bacteria,” making them harder to measure. “Repeatable metagenomic techniques to study the fungi of the gut have become available only recently,” she said.

For the new study, Bougnoux and her colleagues used fecal samples to track the changes in the gut mycobiota in 2 groups of 11 healthy patients before, during, and after they were treated with cefotaxime (in one group) or ceftriaxone (in the other). Both drugs are third-generation cephalosporin antibiotics.

The group first identified the fraction of the fecal DNA that was associated with fungal species. Then, they used high-throughput sequencing to identify which fungal species were present in the healthy gut of the volunteers, before antibiotic treatment. They found that both diversity and abundance of species varied not only from person to person, but also from one collection to another in the same individual. The team used specific qPCR to quantify levels of C. albicans and found the fungus present in 95% of the participants.

The researchers carried out similar analyses during and after antibiotic treatment. They found that across the board, the fungal load—the fraction of fecal DNA—increased in all patients following treatment with antibiotics. But at the species level, those responses varied considerably. Some individuals experienced a significant increase in abundance of C. albicans and other species, while others didn’t. (At least one participant even showed a decrease.)

Further analyses of the samples revealed that the variations in fungal response to antibiotic treatment was connected to the activity of the enzyme beta-lactamase, which is produced by endogenous bacteria from the subject’s microbiota. People with lower levels of beta-lactamase experienced more growth of fungi, including C. albicans, than those with higher levels of the enzyme.

Bougnoux, whose previous work has focused on how intestinal C. albicans colonization leads to infection, said the group wanted to focus on antibiotic use because it’s a major risk factor for colonization. The new study, she noted, is a promising first step toward understanding how the mycobiota responds to treatment—but it’s only the beginning.

“Our study was done on human volunteers who received only one antibiotic, but actual patients often receive several,” Bougnoux said. And those who receive the most are most likely to develop fungal infections, she added. “It remains to be seen if the relation we found between beta-lactams and reduced intestinal C. albicans colonization is also true in these patients.”