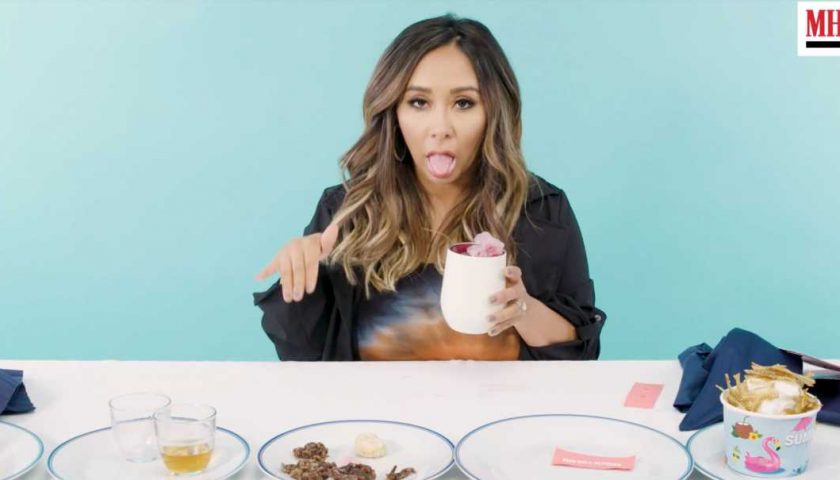 Jersey Shore star, wrestler, TV personality, and someone who has way more Instagram followers than all of us combined, Nicole Polizzi, aka Snooki, came into the Men’s Health offices last week to eat some disgustingly healthy food—shore-style. That meant lots of fish. Which was an issue. Because Snooki hates fish. “Gross!”she said, faced with her potential snack.

Since leaving the gym, tan, and laundry life (somewhat) behind, Snooki has married and become a mom—a badass mom who “crotch bombs” on WWE.

First up was “Cat Poo Coffee.”

“So the cats—and I love cats; I would do anything for them—but they eat the coffee and then they shit it out, and then whatever they shit, they make into coffee,” Snooki summarized. She was not a fan. Also: “I don’t do coffee because it makes me shake like a crackhead.” So, cat shit plus “crackhead” shakes equals a strong Snooki no.

For her no, Snooki had to chose the reality show she wouldn’t want to appear on. Answer: Naked and Afraid. “I have three babies, so this doesn’t look good naked,” she said. “And I’m scared of spiders and the wilderness and the dark.”

Snooki’s food dodging continued for much of the challenge: Dried fish frozen yogurt (“Gross! I hate fish. I don’t eat any fish”); Shaved ice with beat juice (“Looks like a period”); Snapping turtle jerky (“I don’t want to eat turtles because I love turtles. I think they’re so cute. Oh, and it smells like a fuck fish.”)

The final challenge: outing her steroid-taking Jersey Shore co-stars or eating “fish ball” Alfredo. “Is this like an actual fish testicle, or just fishes?” That is the question indeed . . . .