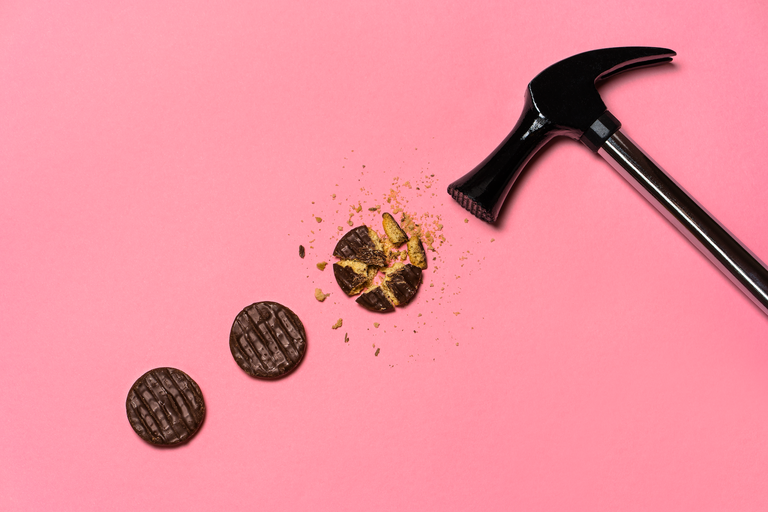 Ann Pearce* scored her dream job in her thirties, moving from teacher to elementary school vice principal—but before long, it was more of a nightmare.

First, she was bullied and yelled at by her boss, who was struggling to fulfilll her own duties. Then, just months later, she was unexpectedly shifted into a new and even more demanding role as high school vice principal, a job for which she felt completely unqualified.

To compensate, she pulled long hours—70 to 80 per week—and everything but work was put on the back burner. “I was leaving the house before my kids woke up, getting home after they were asleep, and doing nothing for myself,” she says. “All I wanted to do was crawl into bed when I got home.”

Her emotional eating hit a new level too. Chocolate and other easy-to-grab sweets became Pearce’s crutch, and ordering takeout for lunch provided a rare bright spot in her hectic 14-hour day.

All told, she gained 30 pounds within a year of starting her new position. “It was a 15,000-step-a-day job, but I was still packing on the pounds,” she says.

Anne’s not alone—people are stress eating all over the world.

Search #StressEating on Insta and you’ll find well over 100,000 posts from people, worldwide. But it’s more than work blues pushing so many of us to eat, post, then gain.

I had to leave our very sick cat at the vet this morning, so I’m cheering myself up. #stresseating #comfortfood

I had to leave our very sick cat at the vet this morning, so I’m cheering myself up. #stresseating #comfortfood

#tbt to this v. accurate representation of me stress eating. #mewantcookies

#tbt to this v. accurate representation of me stress eating. #mewantcookies

Increasingly, research is showing that any type of stress, whether chronic or acute, can affect your weight. (And the findings majorly suck for women because we have much higher stress levels than men, according to the latest Stress in America survey from the American Psychological Association.)

For instance, being in an unhappy relationship can boost waist circumference by more than 10 percent, and going through a traumatic life event— like sexual assault, burglary, or job loss—is strongly associated with becoming obese.

It’s tempting to ascribe these changes to emotional eating, but food accounts for only part of the weight gain. Much of the cause lies deep in our bodies: When you shift into stress mode, a number of hormonal changes and survival instincts kick in. (Many years ago, when we were hunting and gathering, this was a good thing. Now, it just leads to unwanted pounds.) Here’s what happens:

Your body responds to all stress in the same way

Whether it’s something legitimately life-threatening (like a bear attack) or a ridiculous work deadline, your body reacts to all stressors the same, says Shawn Talbott, Ph.D., a nutritional biochemist and exercise physiologist in Salt Lake City.

First, your brain instructs your adrenal glands to release a burst of adrenaline, which revs heart rate and frees up stored energy (glucose and fat) that you can use to fight or flee.

Cortisol has another sneaky tactic: During stressful times, it tells your body to store any unburned calories as fat—typically belly fat.

Next, your adrenal glands release cortisol, which tells your body to replenish that energy by stimulating your appetite for high-calorie foods (unfortunately, your brain doesn’t know if you actually burned any calories). Cortisol can then stay in your system for hours. The result: You end up feeling really freakin’ hungry, even if you’ve just been sitting at your desk all day.

Able to resist the urge to overeat amid the appetite-stimulating effects? You’re not necessarily in the clear. Cortisol has another sneaky tactic: During stressful times, it tells your body to store any unburned calories as fat—typically belly fat. Back in the day, these reserves would ensure you had a quick source of fuel to flee from danger or survive famine. Today, they keep you from buttoning your pants.

But wait—there is an upside to all these changes: Occasional stress can help you rise to challenges, and in the right amounts, cortisol has many important functions, helping you form memories, reduce inflammation, and maintain a healthy blood pressure.

The key: Get a handle on your stress so you’re not always frazzled. Here’s how to do it:

You know the feeling: You sent a cheeky Slack message (GIF included!) to a colleague at work two hours ago, and she still hasn’t replied—and now you’re trying to figure out if she’s mad at you. ? ?

In situations like this, when your mind takes you on a toxic joyride, your best bet is to stop and take a deep breath, says Pam Peeke, M.D., author of Body for Life for Women. Deep breathing calms the fight-or-flight response, releases feel-good hormones called endorphins, and gives you an opportunity to reconsider how to respond to a situation.

Physical activity helps keep you fit by burning calories, and it’s the most effective method of lowering circulating cortisol. “Regular exercisers are better at getting rid of this hormone and at producing just enough of it compared with sedentary people,” says Talbott.

So what’s the best type of exercise for managing stress? While research has found that many kinds of physical activity lower cortisol, intense exercise may be the most effcient. If you’re doing cardio, add high-intensity intervals into the mix in the form of sprints, burpees, or mountain climbers.

Not only do these foods keep blood sugar levels steady, but they’re also packed with stress-management nutrients like B vitamins, magnesium, selenium, zinc, and calcium, according to Elizabeth Somer, R.D., author of Eat Your Way to Happiness. And know that strict diets won’t help—research shows calorie deprivation can actually increase cortisol levels.

*Name has been changed

This article originally appeared in the June 2018 issue of Women’s Health Magazine. For more great advice, pick up a copy on newsstands now!