It’s often an afterthought while you’re falling asleep next to (or while holding hands with) your partner, but if you aren’t already taking cuddling seriously, it’s about darn time.

Whether you snuggle on the couch, in bed, or on a blanket in the park, it’s an important part of a relationship. Not only can your preferred position—for cuddling, of course—reveal how you feel about each other, but there are also many health benefits that come from a good spooning sesh.

Turns out, getting touchy-feely is something humans are hardwired to crave. So, if you’re the one who’s always looking for an excuse for an extra hug or insisting that a good Netflix binge is made better by being close to each other, you can blame biology.

“Physical touch is a basic human need that promotes bonding, attachment, and connection,” says Dr. Sarah Hunter Murray, PhD, RMFT, a sex researcher and relationship therapist. “It starts from the moment we are born with skin-to-skin contact between infant and caregiver. And while physical touch may look different as we get older, the need for touch continues all throughout our lives.”

Of course, for some people, being a human pillow for their S.O. isn’t always worth waking up soaked in sweat, so cuddling might be a no-go. And hey, if you tend to prioritize solo comfort, that doesn’t mean you won’t still dream of your partner in a romantic slow-motion montage.

But for those who sleep better with their bae’s arms wrapped around them, here’s what that might say about you and the benefits of cuddling up.

What does your cuddling position say about you?

Yep, your body language says way more than you think—even when you’re sleeping. The way couples position themselves in bed can “speak to how they look to one another for support, how they lean on each other—literally and emotionally—and how comfortable they are with closeness and intimacy,” says relationship expert, Jane Greer, PhD, and author of What About Me? 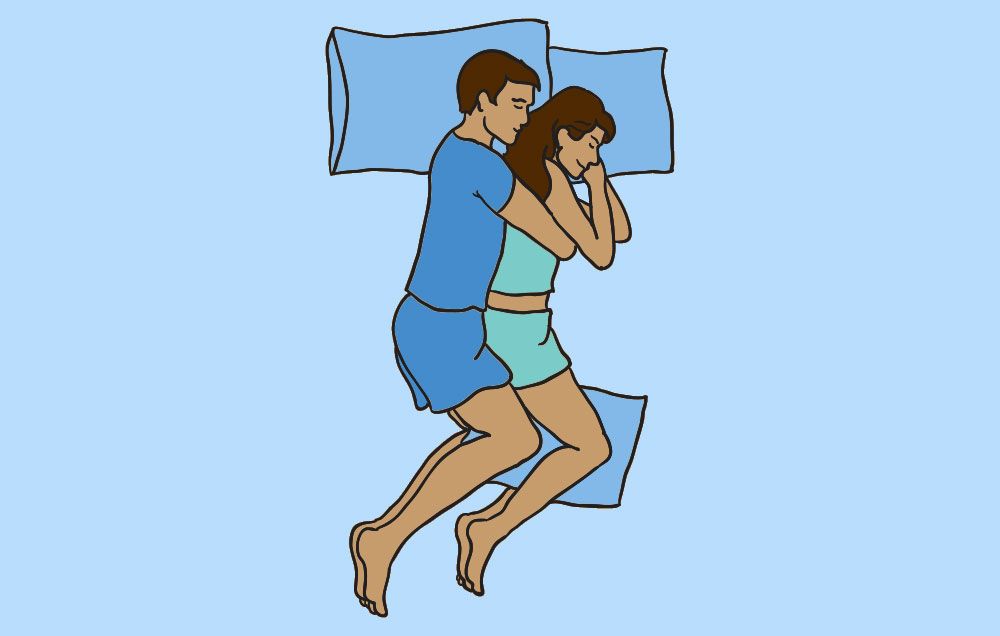 If you and your partner sleep in this cuddling position it means you see eye-to-eye. Greer says couples who spoon are “merging their bodies together as one, so you may see them dressing alike or enjoying the same things.” There’s even “a certain similarity” to these pairs, she adds.

This protective sleeping arrangement “can speak to one person feeling very safe and secure in their partner’s arms,” Greer explains. “They feel their partner can help support them both physically and emotionally.” When it comes to personal issues and difficulties, this person can lean on their S.O.

Ever wondered how people know they’ve fallen in love? Check out what these real people had to say.

This position is reflective of a mutual respect for each other. Each of you is comfortable apart and cognizant of the other’s space, but you’re still there for one another. “You want to touch, but not to the point where you feel too enveloped,” or like you’re sacrificing your own comfort for theirs. 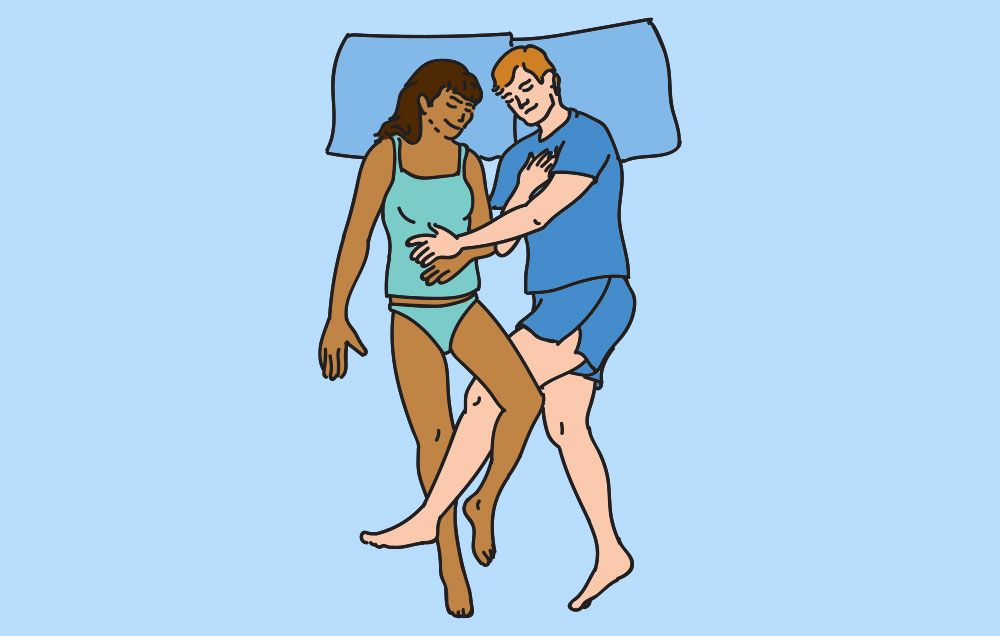 Though you and your partner have your own spaces, you still crave a connection, Greer says.

While this cuddling position might seem reserved for the honeymoon stage, Greer says hugging while you sleep means you’re “really into each other,” and that doesn’t necessarily have to fade away. Couples who do this “don’t want to miss anything.” They might share their food, personal business, and intimate details about themselves with each other.

6. Arm Draped Across The Other’s Back 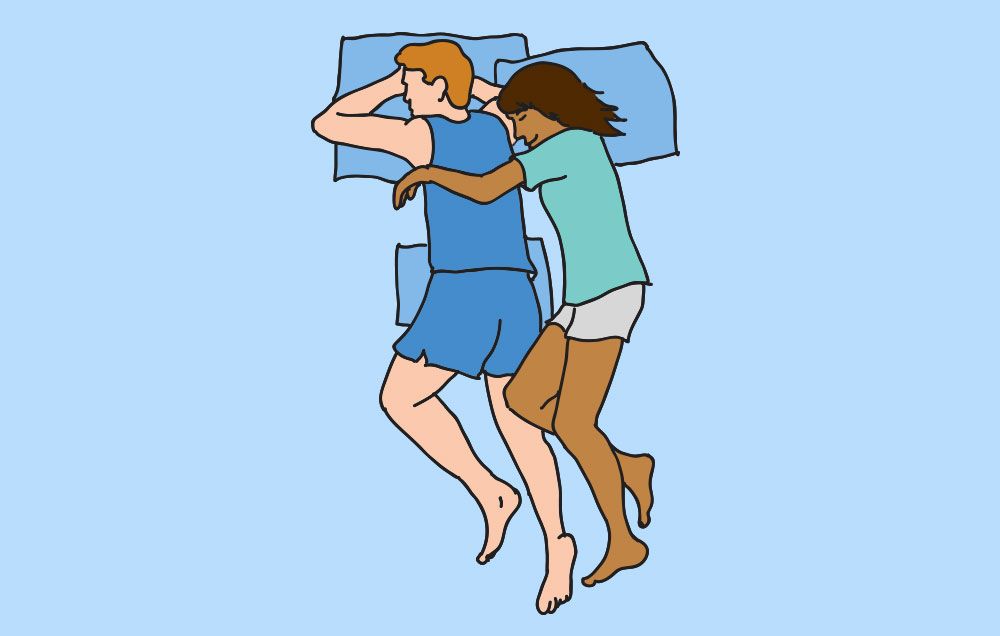 This position says “‘I’ve got your back,'” Greer says. The person who’s doing the cradling is communicating an understanding that their partner might feel neglected or needs support.

If you realize your partner has suddenly taken to the other side of the bed, that might mean they are “much less comfortable with physical affection and touching” at the moment and could signal a problem.

But if this is a usual occurrence, it just means that you’re confident in the relationship and don’t require “shared space,” says Greer. 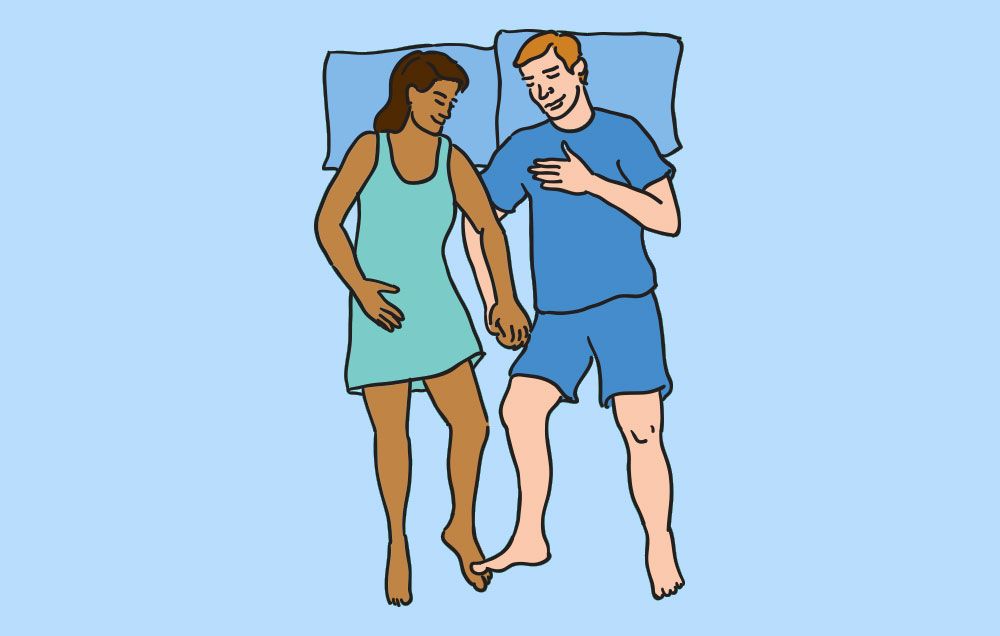 Sleeping this way says you and your partner want to stay connected, according to Greer. It’s about “feeling secure that you’re holding on to one another.”

Do you sleep with your head near the headboard, while your partner sleeps curled up halfway down the bed? “This is a reflection of their individual preferences,” Greer says. And the fact that these preferences aren’t aligned shouldn’t necessarily communicate to you that your partner doesn’t want to be close. However, if you’ve been feeling like you and your partner are in different places, this might be a clue that it’s not just in your head.

What are the benefits of cuddling?

But no matter how you do it, you can rest assured—no pun intended—that you’ll be getting access to those extra perks of a good snuggle.

1. It produces the “love hormone,” oxytocin.

This little hormone basically goes into hyperdrive when you make physical contact with someone, which means cuddling has the potential to release a lot of it. Oxytocin can also create feelings of sexual arousal and trust, earning it the nickname the “love hormone.” 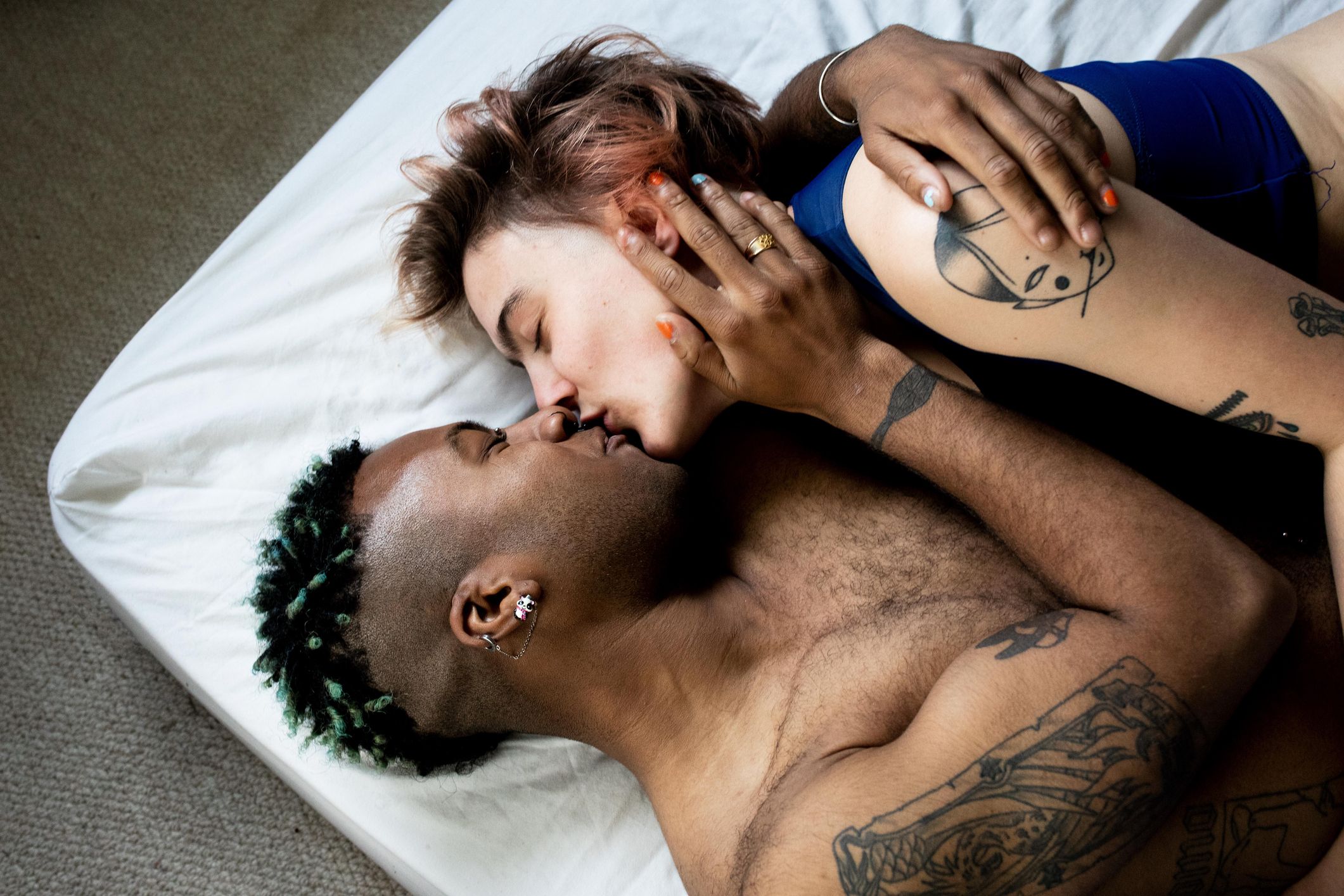 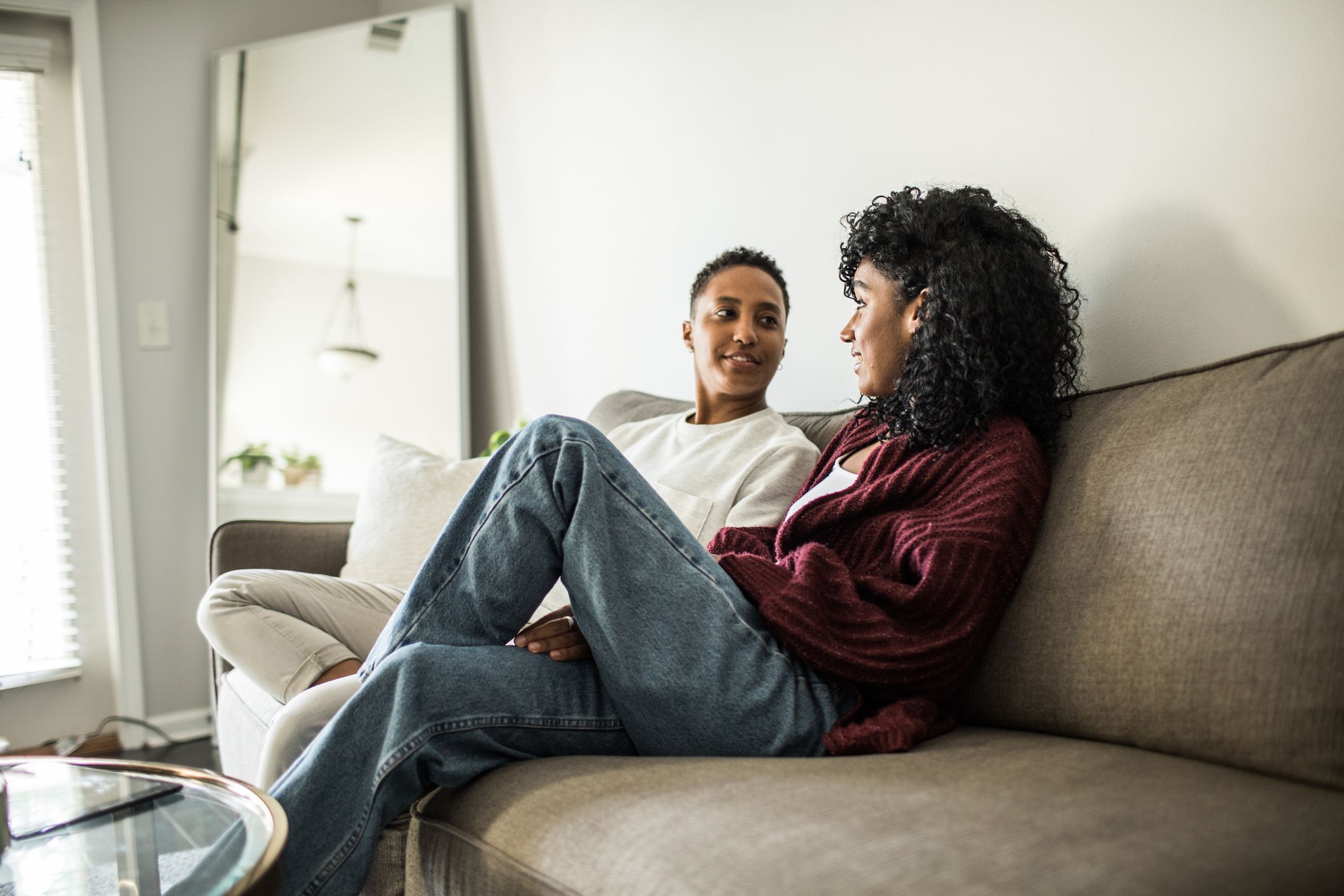 It’s the influence of this hormone that makes cuddling just feel good, says Murray, and its presence accounts for many of the other positive effects of getting close to someone. (Fun fact: This little hormone is also responsible for signaling contractions during childbirth and milk production postpartum.)

2. It reduces stress and anxiety.

Feeling anxious about a big presentation coming up or stressed about a big problem at work? Make time for some spooning. “Oxytocin also makes us feel more settled and safe in our bodies,” says Murray. “Cuddling, as a result, can play a role in reducing stress and anxiety and increase our feeling of calm.”

3. It can strengthen your immune system.

Forget amping up your vitamin C intake to fight the common cold, and incorporate cuddling as part of your wellness regime instead. Research from Carnegie Mellon in 2014 found that hugs—as an example of social support, in general—can protect you from weaknesses in your immune system that are often brought on by stress, especially if that stress is caused by fighting with someone. It ends up that the more social support you feel like you have, the more support your body has to fight off illness.

4. It lowers your blood pressure.

To put the theory of stress reduction to the test, researchers at the University of North Carolina-Chapel Hill devised a study to see the direct effect physical contact with someone you love can have. In the exercise, individuals who were married or in long-term relationships were asked to recall a recent event that was particularly stressful. Half of them were told to give their partner a 20-second hug before telling the story while the other half just sat with their partners. The results? The blood pressure and heart rates of those who did not get a good cuddle were significantly higher than those who did. Oxytocin really is the hormone gift that keeps on giving.

5. It gives you greater sexual satisfaction.

It makes sense that when you feel closer to your partner emotionally, it’s easier to feel closer to them in other circumstances as well. Researchers have found that couples who cuddle after sex report increased sexual satisfaction, not to mention that physical intimacy can often lead to getting intimate, notes Murray. 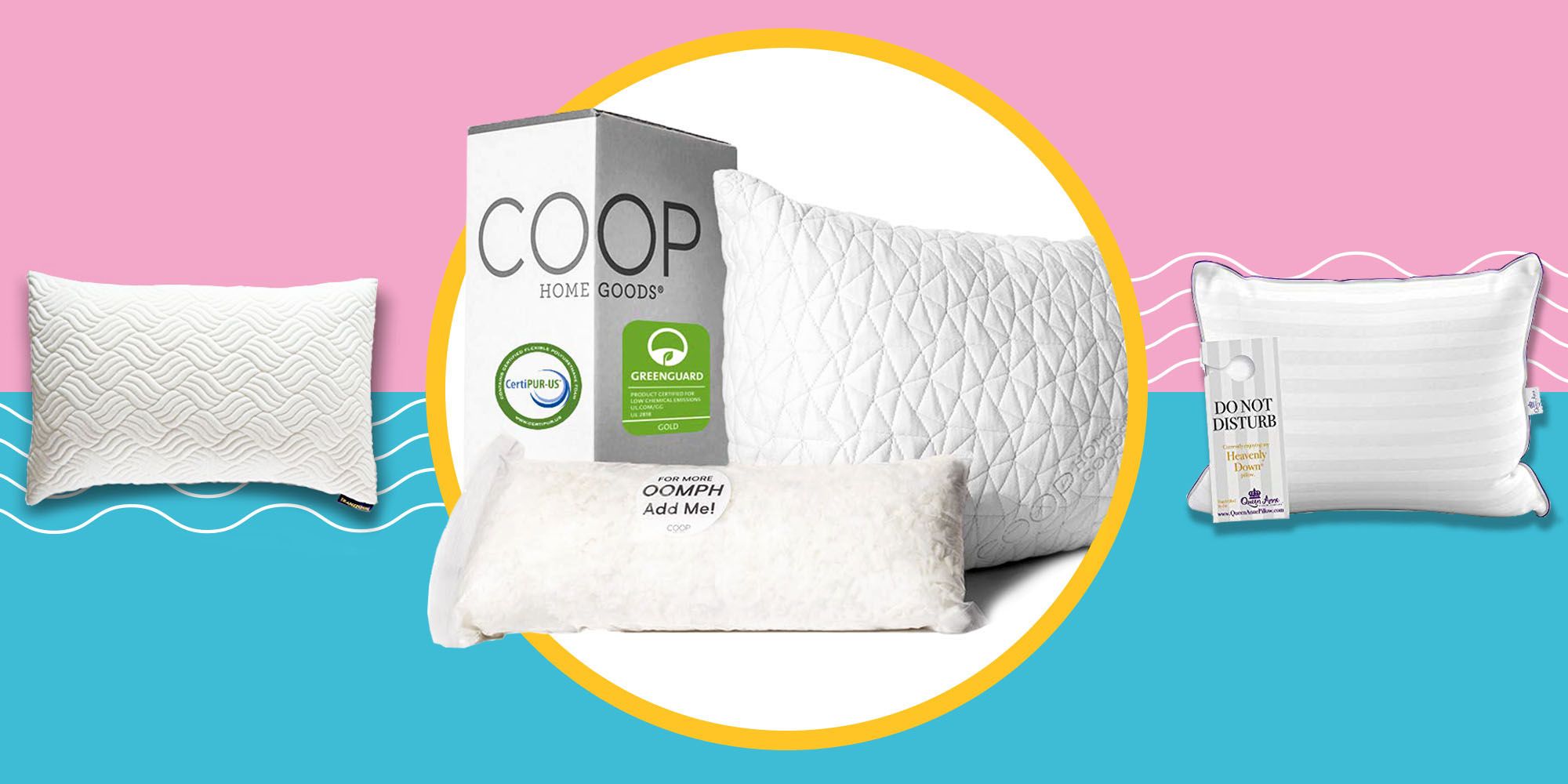 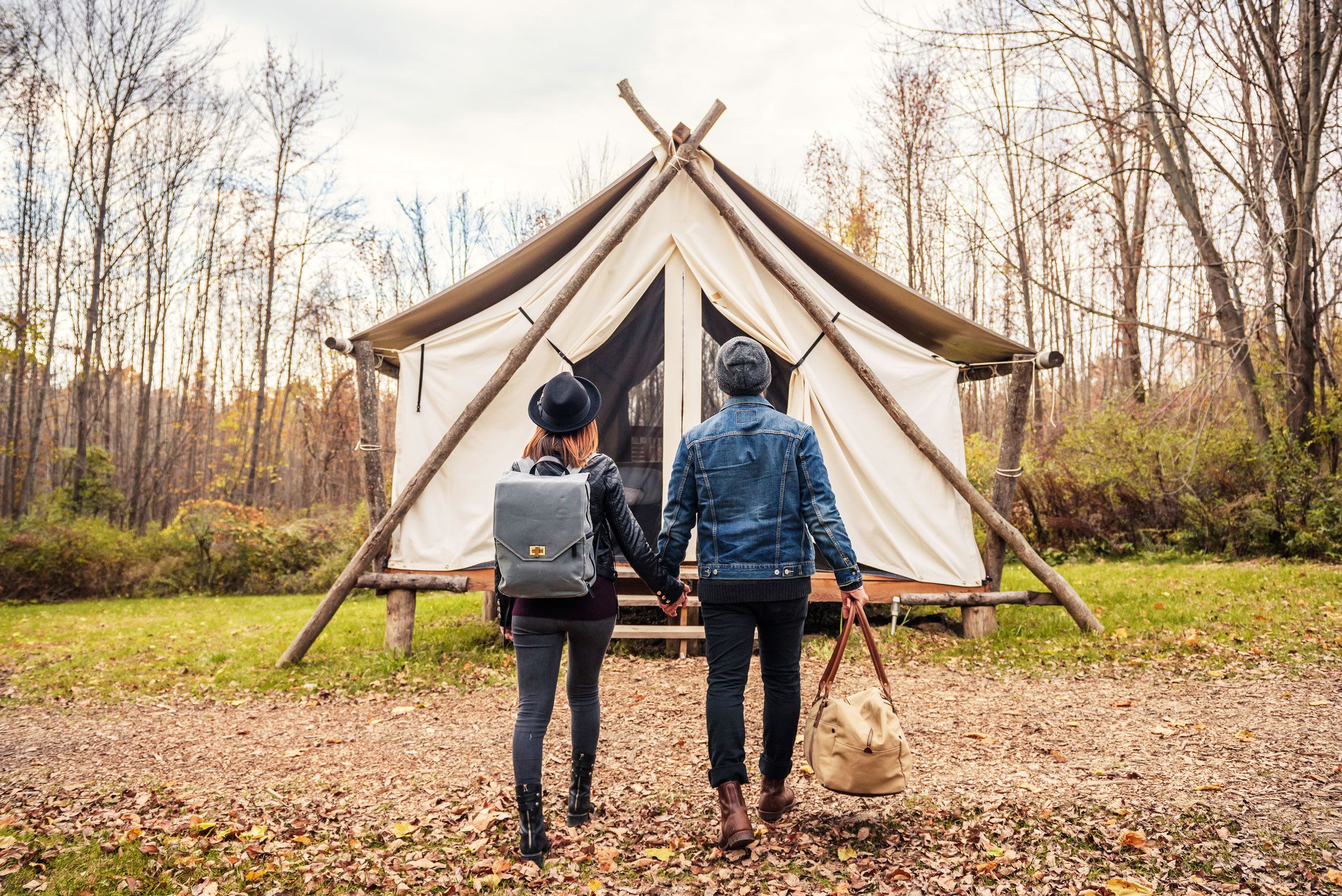 But that being said, Murray cautions against only seeing cuddling as a means to initiate sex. If it always leads to getting down to business, she explains, someone might turn down a snuggle sesh if they aren’t interested in going any further in the moment. “The unfortunate part of this is that we may actually want to cuddle with our partner for a number of other reasons,” she says, “but we may miss out on these nice feelings because we don’t want to give the impression we’re in the mood for sex.”

6. It helps you sleep better.

No, it’s not just because you’re already feeling more sexually satisfied that catching those Zzz’s suddenly seems easier post-cuddle. Research in the journal Regulatory Peptides has shown that oxytocin also promotes sleep in the brains of mice. There’s no official word on whether that benefit carries over to humans, but why not use it as an excuse to embrace your inner cuddle monster anyway?