Having a stressful job is far more likely to prove kill men with heart problems than women, a study found.

Men with heart problems are six times more likely to suffer an early death if they have a stressful job – even if they keep fit and eat a healthy diet – research suggests.

Yet there was no association between work stress and premature death for women with heart disease, stroke or type 2 diabetes.

Scientists suggest one explanation is men are more prone to clogged arteries during their working lives than women, who generally have a much lower chance of heart problems before menopause. 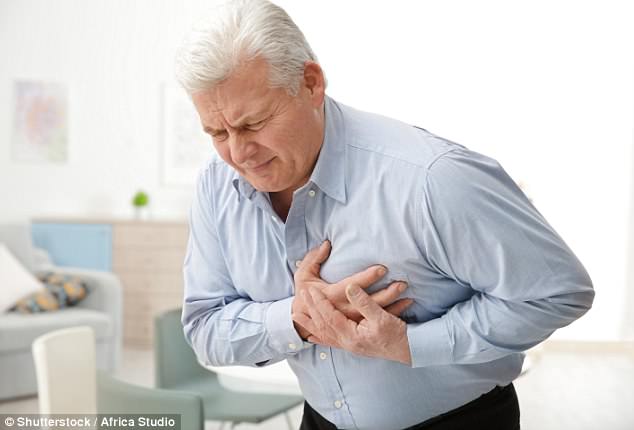 Work stress is more likely to be fatal for men with heart disease than women, says a new study

Reducing work hours and prescribing stress management to men with these illnesses may therefore be needed minimise the risk, they say.

Lead researcher Professor Mika Kivimäki, from University College London, said: ‘Work is a common source of stress in adulthood, triggering natural stress responses that were programmed in our bodies generations ago.

‘These can result in physical reactions to situations like work stress.

‘Our findings give evidence for there being a link between job strain and risk of premature death in men with cardiometabolic diseases, such as coronary heart disease, stroke, and diabetes.

WHAT IS METABOLIC SYNDROME?

It puts you at greater risk of getting coronary heart disease, stroke and other conditions that affect the blood vessels.

On their own, diabetes, high blood pressure and obesity can damage your blood vessels, but having all three together is particularly dangerous.

They’re very common conditions that are all linked, which explains why metabolic syndrome affects an estimated one in four adults in the UK.

You would be considered to have the sydrome if you have three or more of the following symptoms:

Scientists looked at data from 100,000 people in the UK, France, Finland and Sweden, including 3,441 with these illnesses.

They were given a questionnaire on their lifestyle and health at the start of the study with their medical records tracked over 14 years.

Researchers looked at two types of work stress – job strain – having high work demands and low control over them – and ‘effort-reward imbalance’, defined as putting in lots of effort, but getting little reward in return.

The researchers found that, among men with heart problems, those experiencing job strain had a 68 per cent greater risk of early death than those where it wasn’t a factor.

There was no risk in those with the health problems that did not feel appreciated at work.

Neither type of work stress was associated with increased mortality risk for women – with or without these health issues.

Stress can result in higher levels of the hormone cortisol, which increases glucose production and limits the effect of insulin, potentially leading to worse prognosis in diabetes, researchers suggest.

It can also elevate blood pressure and affect blood clotting, potentially increasing the risk of cardiac events in people who already have high levels of hardening of the arteries.

They suggest more research is needed to identify which specific interventions might improve health outcomes in men with coronary heart disease, stroke, or diabetes Commenting on the findings, published in The Lancet Diabetes & Endocrinology journal, Yulong Lian, of Nantong University in China, said: ‘Their results are provocative and encourage careful attention to work stress reduction among patients with cardiometabolic diseases.’