Woman, 47, has an ‘astonishing’ 9lbs tumour removed from her chin after it had been growing there for 18 years

Incredible before and after pictures show a woman’s remarkable transformation after surgeons removed a mammoth tumour on her chin.

The unnamed 47-year-old told doctors the unusual-looking mass had been growing for nearly two decades before she had it chopped off.

Medics in Uttar Pradesh, India, where the woman is from, described the 9lbs 9oz (4.35kg) growth as ‘astonishing’. 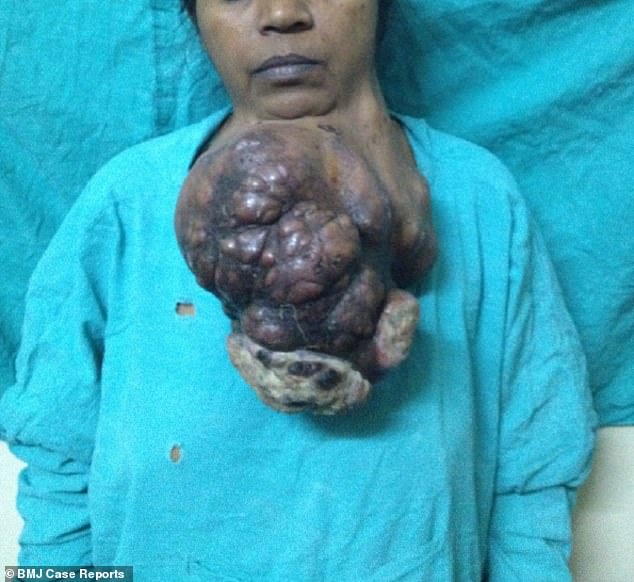 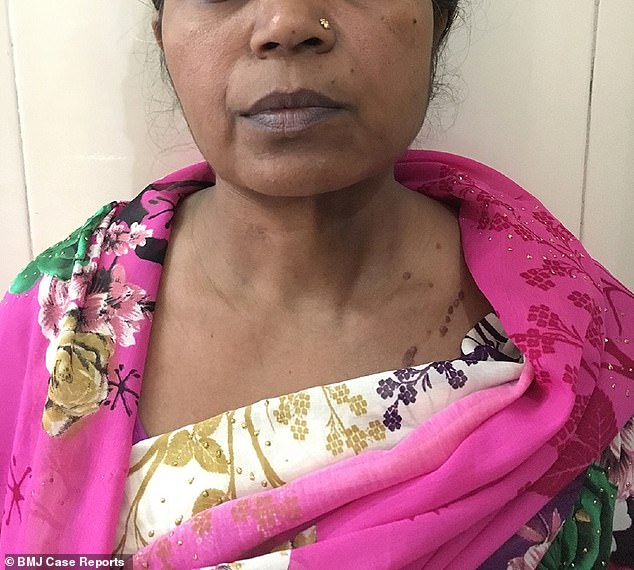 Surgeons did not reveal specific details of the life-changing operation to remove the woman’s mass, which was around 12inches-long (30cm)

They were so intrigued by the tale they decided to publish it in the prestigious publication, the British Medical Journal of Case Reports.

The team at Moti Lal Nehru Medical College in Allahabad claimed that such giant pleomorphic adenomas are ‘very rare’ in medical literature.

In the woman’s case report, surgeons led by Dr Ashutosh Rai wrote: ‘[To] find such large tumours even in modern times is astonishing.’

They revealed how the woman put off seeing doctors for around 18 years because she was too scared to undergo the drastic surgery.

The woman, from Allahabad, sought treatment at the hospital in her town – 124miles (200km) south east of Lucknow.

She explained how the mass had grown slowly over the years – but dramatically sped up in the past 24 months. 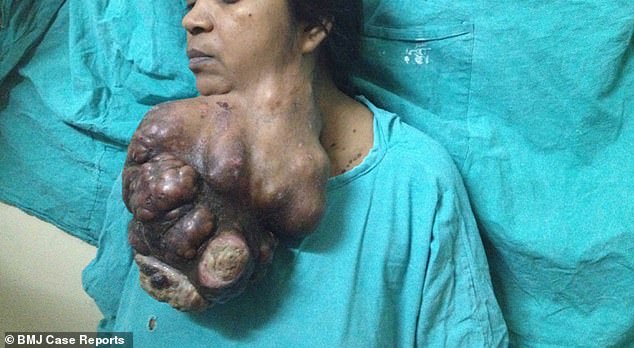 Medics in Uttar Pradesh, India, where the woman is from, described the 9lbs 9oz (4.35kg) growth as ‘astonishing’ 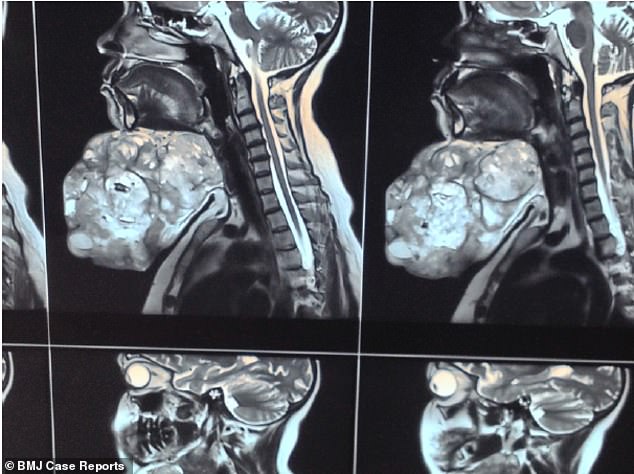 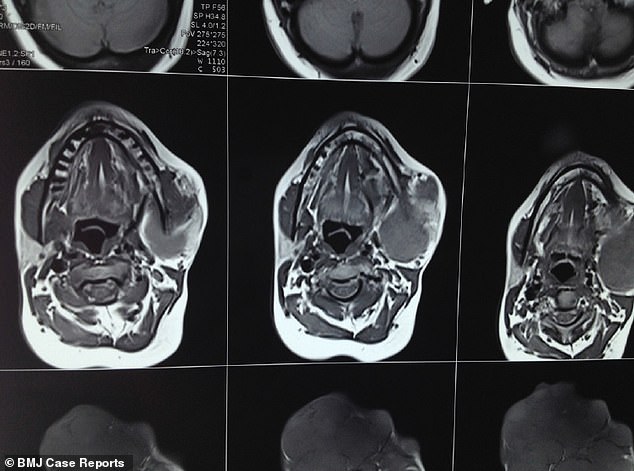 The woman, from Allahabad, sought treatment at the hospital in her town – 124miles (200km) south east of Lucknow (MRI scans show prat of the growth) 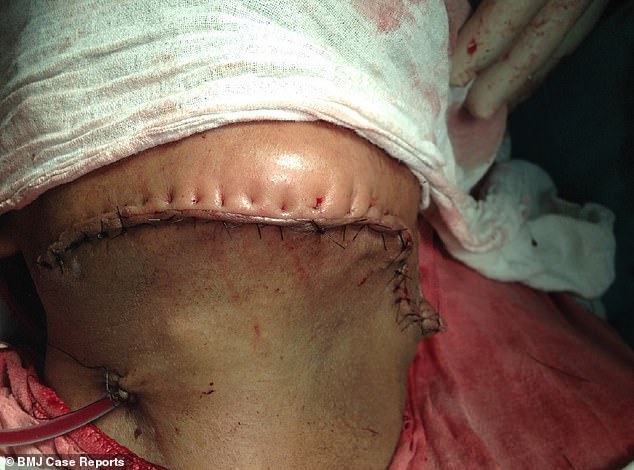 The tumour even had discharge, however, it is unknown if the oozing liquid produced an aroma or what colour it was.

Surgeons did not reveal specific details of the life-changing operation to remove the woman’s mass, which was around 12inches-long (30cm).

However, they revealed the patient recovered well and had no medical complications five months after the procedure.

They are the most common salivary gland tumour, figures show – making up around 70 per cent of all cases.

However, it is unclear how common benign salivary gland tumours are.

BENIGN MOUTH TUMORS AND HOW THEY GROW

A benign tumor of the oral cavity is a non-cancerous growth that does not spread to other parts of the body and is not usually life-threatening.

There are several different types of oral cavity tumors:

Hyperplasia is an increase in the number of normal cells, and such growths are very common in the mouth. It is usually caused by irritation or injury to oral cavity tissue.

There are two types: fibromas, which can occur anywhere, and pyogeneic granulomas, which usually occur on the gums.

Papillomas develop from epithelial cells that line the inner surface of the oral cavity.

They are wart-like growths often associated with human papillomavirus (HPV).

Also called mixed tumors, they are slow-growing and painless masses.

These tumors start in the different soft tissues that lie beneath the lining of the mouth, such as blood vessels and fat.

Most are soft to the touch and painless.

Odontogenic tumors and cysts are often benign and occur mostly in the jaw bones (mandible and maxilla).

They start from the tooth-forming tissues and may be caused by abnormal development of the jaw bone.

6. Benign tumors of the bone

These tumors occur in the jaw bones (maxilla and mandible).

There are two types: osteoma, found on the skull and facial bones, and ossifying fibromas, which develop in the lower jaw bone or mandible.

An osteoma may cause symptoms when it grows into the surrounding tissues.