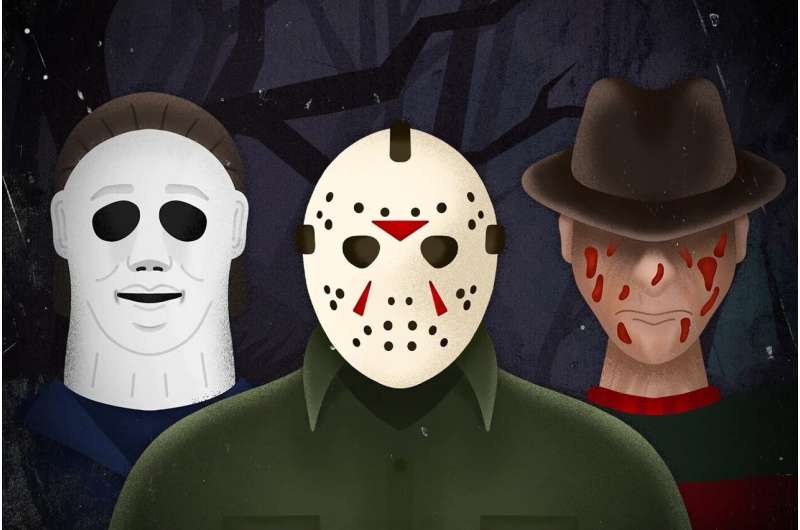 A masked killer stalking his prey in the dead of night. Ravenous zombies clawing at the door. A ghost jumping out of the darkness. If we encountered any of these things in real life, we’d likely run away screaming. Put them in a movie and we’re onboard.

But why do people love to seek out horror movies? What is it about our brains, our psychology and our culture that has us excited to get scared?

Part of it boils down to the many ways our brains experience, interpret and contextualize fear, and that is still somewhat of a mystery, says Ajay Satpute, an assistant professor of psychology at Northeastern.

However, Satpute is trying to unravel it, one scare at a time.

Satpute, who also serves as a core faculty member at the Institute for Experiential AI, studies fear not as an instinctual set of survival behaviors but as a subjective experience, one that can be very different for each person. He says that although fear is a powerful emotion, humans are not necessarily born with innate fears. In line with the psychological constructionist theory, Satpute says humans are born with the ability to feel affective states—pleasure and pain, drowsiness and arousal—but emotions, like fear, are learned. They are the brain’s way of learning what certain signals from the body mean before interpreting and contextualizing them.

“The key distinction is that fear itself isn’t innate—that part is learned—but avoidance can be there,” Satpute says. “You’re born with defensive behaviors like many species are.”

As director of the Affective and Brain Sciences Lab, Satpute has also been looking into exactly what parts of the brain activate when we’re scared. Contrary to assumptions that there is a central shared fear network in our brains, Satpute has found that the brain regions that predict or respond to fear are widespread.

“The reigning assumption has been that there is this core fear network or core fear areas or a fear neural signature that will predict fear across situations,” Satpute says. “In our study, we actually tried to test it and we found that the vast majority of brain regions that predict fear only do so in specific situations.”

What is known, Satpute says, is that the human brain responds differently to a horror movie versus a genuinely life-threatening situation––but that doesn’t mean there isn’t a gray area.

“When it comes to the jump scare stuff, understanding that something is a simulation or not real doesn’t mean that whatever sensory systems we have are not going to respond,” Satpute says. “You’re controlling all of your sensory input because you’re anticipating that you’re going to receive a startle. You’re basically regulating your sensory input to reduce the effect of the startle.”

But why do people seek out the nerve-wracking, full body experience of a horror movie? Satpute says there are several possible neurological reasons audiences can’t get enough of horror.

For some people, it is arousal-seeking behavior. Humans operate on a natural arousal and wakefulness cycle but also use external stimuli, like certain kinds of music or films, to regulate that cycle. A postdoctoral student in Satpute’s lab has done work that shows how voluntary exposure to pain can make someone release endorphins and feel better after the pain. Satpute says something similar could occur with fear.

“When you’re feeling afraid, it’s not great in the moment, but when it goes away, there’s this release and euphoria and that’s actually rewarding,” Satpute says. “If you really just want to have that wakeful moment in life where all senses are on, a little fear doesn’t hurt.”

Horror movies could, in a way, also serve as educational material for the brain, Satpute says. The brain is wired to try to predict its internal and external environment. When someone is watching a horror movie, the brain could be using the horrific situations on screen as a kind of covert simulation, what Satpute calls “vicarious fear.”

“At least since we started telling stories to each other, one can imagine this being a way to transmit and learn,” Satpute says. “In that sense, it’s like the brain is using that information to build mental models to guide behavior should those situations arise for us.”

Kendall Phillips, author of “A Cinema of Hopelessness” and “Projected Fears” and host of the Pop Life radio show, says there are also deeper cultural and sociological reasons behind why people continue to flock to horror movies.

The genre has a deep history stretching back to Universal’s “Dracula” in 1931, and its appeal has remained constant. In fact, horror movies seem almost marketproof, even in 2022 when the in-theater experience is reeling from the COVID-19 pandemic and streaming. Recent horror films like “Barbarian” and “Smile” have had sustained success at the box office. Phillips traces it all back to something inherent to the genre.

“For me, it comes down to a need to process the various real-world fears and thinking about, how do we understand a world that can be very scary?” he says. “It shows us a mirror of the world that is distorted and terrifying and yet somehow feels right.”

It’s not a coincidence that horror has thrived, creatively and financially during tumultuous times. The films themselves might not always directly represent the anxieties and fears of the time, but audiences still find some kind of solace in seeing fear put on screen.

“Dracula” came out during the Great Depression. The Second Golden Age of Horror ran from 1968 to 1982 and included classics like “Night of the Living Dead,” “Rosemary’s Baby,” “Halloween” and “Friday the 13th.” It coincided with the Vietnam War, the anti-war and civil rights movements and the Watergate scandal.

“Of course, no surprise, now it’s back,” Phillips says.

“All of this horror from the last 15 to 20 years has been centered on how the system has failed, we are in an era without hope, there is no authority,” Phillips adds. “If you’re going to be saved, you’re going to have to do it yourself. … It’s kind of a ‘trust no one’ moment.”

Of course, at the center of the best horror movies is a great monster, whether it’s a killer like Michael Myers, the classic villain from “Halloween,” or a creature like Dracula. Horror movie monsters are vital to the longevity of the genre, not only because they offer scares and thrills but, like the films themselves, tap into something deeper.

“There’s something in even the most evil monster that is seductive because they are unbound but also sympathetic in that they don’t fit,” Phillips says.

Going all the way back to the origins of the horror film, Universal’s 1931 “Frankenstein” embodies the best of what the movie monster can do for audiences. Dr. Frankenstein’s creation isn’t born a monster––he’s a misfit, a hulking child, curious and scared. And who can’t relate to that?

Modern horror maestro Guillermo del Toro recently said, “Horror is a shrine to imperfection and tells you it’s OK to be a monster.” If fear is a mirror, as del Toro says, then when we go to the theater, we are looking for more than just cheap thrills. We’re looking for ourselves.