Why ARE you always tired? From being a secret snorer to not eating enough red meat, all the medical reasons that may explain your constant fatigue

It’s a question many of us have asked ourselves when, despite getting the recommended eight hours of sleep the previous night, we’ve woken up feeling shattered.

One in eight Britons report feeling tired all of the time and one in four feel fatigued most of the time, according to a YouGov survey earlier this year.

That makes sense, given that only a third of us get the minimum seven hours of sleep a night and just one in five consistently get a full eight hours.

But there is still a large chunk of people who feel tired no matter, seemingly no matter how well or long they sleep.

Here, Mailonline takes a look at a whole host of reasons you might be flagging according to science — and what you can do to address it. 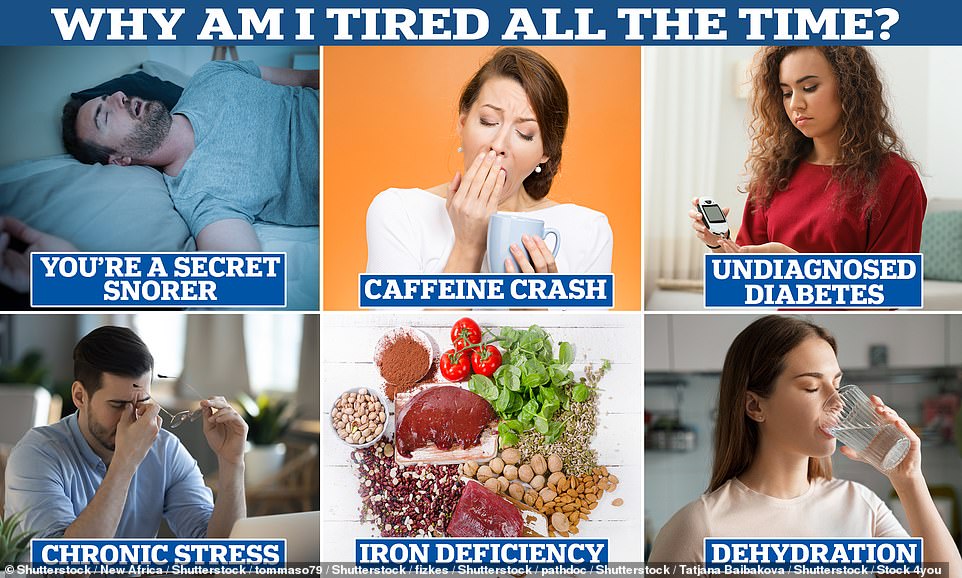 One in eight Britons report feeling tired all of the time and one in four feel fatigued most of the time, according to a YouGov survey earlier this year. There could be a variety of medical reasons for this, including drinking too much caffeine, being a secret snorer or having an underlying health issue

If you’re single or live alone, you could be blissfully unaware that you’re a noisy sleeper.

It’s estimated that 40 per cent of British adults snore to some extent, the equivalent of around 15million people.

For one in 10 of these people, it can be a sign of a disorder known as sleep apnoea. This occurs when the walls of a person’s throat relax and narrow during sleep, blocking their airways.

The condition has been linked to obesity, having a large neck, sleeping on your back and smoking and drinking alcohol.

You’d think with decades of practice, we’d all be professionals by now. So, why is it that millions of us still struggle to get a good night’s sleep?

Two-thirds of adults in the US and UK fail to get the recommended eight hours and studies suggest the average American and Briton gets around just six.

Busy lives and hectic work schedules are the most common reasons given for not getting enough sleep. But our obsession with technology, a lack of exercise and culture of eating late have also been blamed as reasons we are so under-slept.

Sleep doctors in recent years have waxed lyrical about the ’10-3-2-1′ formula, a step-by-step guide on how to best prepare yourself for a night of optimal sleep throughout the day.

But it’s bad news if you love caffeine, as the method says it has to go at least 10 hours before bed. And late eaters would have to bring their mealtimes forward to three hours before bed, or risk a night spent tossing and turning.

The formula summed up:

It has been dubbed a ‘silent killer’ because the disruptions it causes to sleep prevents the body from resting properly during deep sleep, putting extra stress on our organs.

During an episode, the lack of oxygen triggers a sufferer’s brain to pull them out of deep sleep so their airways reopen.

It has already been shown to raise the risk of high blood pressure, stroke, heart attacks and type 2 diabetes. But last week, a study of 4,000 patients with sleep apnoea found it may also cause cancer.

Half of the patients in the study had cancer. Results showed those with the most severe sleep anpoea were more likely to have lung, prostate or skin cancer.

The Swedish researchers are unsure if disturbed sleep is the cause or the symptom of the cancer, but it is a worrying sign.

If you are a secret snorer with sleep apnoea, you may notice during the day feel very tired, find it hard to concentrate or have a headache when you wake up. Sleep apnoea does not always need to be treated if it’s mild.

But many people need to use a device called a CPAP machine. You’ll be given this for free on the NHS if you need it.

A CPAP machine gently pumps air into a mask you wear over your mouth or nose while you sleep. Less common treatments for sleep apnoea include a gum shield-like device that holds your airways open while you sleep –  known as a mandibular advancement device- and  surgery to remove large tonsils.

Tea and coffee is the backbone of the British workforce — but caffeine is a double-edged sword.

It can be the afternoon antidote if you’re feeling fatigued and demotivated, but it can also rob you of a quality night’s sleep at night.

The study was done on 16 ‘good sleepers’, all of whom got six to eight hours sleep a night and typically fell asleep within 30 minutes of getting into bed.

But research in 2015 indicated that caffeine can also delay the timing of your internal body clock. Five people were kept under highly controlled conditions for 49 days.

Before bedtime, they were given various treatments: either a double-espresso caffeine dose, exposure to bright or dim light, or a placebo.

The caffeine delayed their circadian rhythm by 40 minutes, a shift about half as long as exposure to bright light. Scientists measure the internal body clock by monitoring hormones and core body temperature.

What many people still don’t know is that caffeine can stay in the body for up to 10 hours.

That means people planning on going to bed at 10pm should cut their intake off at 12pm if they want to get the best sleep possible.

Caffeine can also make you more tired in other ways.

Once its effect wears off, your body may experience a buildup of adenosine that hits you all at once.

If you’re drinking coffee with added sweeteners, they might be adding to your sleep woes. Sweeteners like sugar, syrup, or honey might actually be causing a sugar crash, according to new research.

If your body isn’t used to sweeteners in your coffee, it may produce additional insulin as a response. This may cause your blood glucose levels to drop, leading to a good old-fashioned sugar crash.

You may be surprised to know the majority of Britons and Americans are medically dehydrated.

A survey conducted by New York Hospital and Cornell Medical Center found that 75 per cent of its 3,003 subjects suffered from chronic dehydratioin.

And polls in the UK suggest Brits consume just just 850ml of water per day – less than half of the recommended daily intake — on average.

Your body needs water to function, so without it your metabolism slows down. Starving your brain of water can make you mentally fatigued.

In a 2019 study, researchers in China looked at the effects of severe dehydration on brain power and mood. They recruited 20 people who were not allowed to drink water for a day and a half.

By surveying the participants’ mood before and after the water deprivation, the scientists at Peking University found that dehydration nearly doubled people’s feeling of fatigue.

The study, published in the International Journal of Environmental Research and Public Health also found that a lack of water slowed people’s reading speed, reaction times and led them to make more errors.

‘Not having enough water affects all of your body including your brain, leading to feelings of tiredness,’ said Dr Hassain, from King’s College London.

A 2015 survey of GPs in the UK found  one in five patients go to the doctor with symptoms – such as tiredness – that can be caused by not drinking enough.

This includes tea, coffee, milk and fruit juice, although water is by far the best source as it doesn’t contain added caffeine or sugar.

Having low energy may also be down to diabetes. Around 850,000 people in the UK are estimated to be living with type 2 without realising it.

The condition happens when your body becomes insensitive to the hormone insulin, which usually controls blood sugar levels.

One reason why diabetes makes you so tired is that having too high or too low blood sugar levels disrupts sleep, Dr Sufyan Hassain at King’s College London told MailOnline.

‘We know your quality of sleep varies with sugar levels, so having suboptimal sugar levels in can disrupt sleep making you tired,’ he added. Fatigue and weakness may result when the cells do not get enough glucose.

A further seven million people in the UK are prediabetic, according to Diabetes UK, which can cause similar symptoms.

The link between type 2 diabetes and a lack of sleep is a vicious cycle. Not only can insomnia be a sign of the disease, it can also be a cause.

One of the most comprehensive papers yet, published in April by Bristol University, calculated that treating insomnia could trigger a drop in blood sugar levels comparable to losing 14kg (2st 3lbs).

If you are feeling very tired all the time and have to get up during the night to urinate a lot, then it may be a sign of the condition.

Other symptoms include  feeling thirsty all the time, losing weight without trying to, blurred vision and cuts or wounds taking longer to heal.

Not eating enough red meat, dark green vegetables or pulses may be the cause of your sleepiness.

These foods are all rich in iron, a major component of hemoglobin, a type of protein in red blood cells that carries oxygen from your lungs to all parts of the body

Dozens of studies have shown having too little of the mineral can lead to anaemia, which can cause tiredness, shortness of breath and irregular heartbeats.

In Britain, the British Medical Journal suggests one in ten British women are iron deficient – while around 3 per cent of men are.

Taking iron tablets is the most common treatment prescribed by doctors.

A 2003 review suggested popping iron pills may even help those who have low iron levels but are not clinically anaemic.

Scientists at the University of Manitoba in Canada analysed existing data from 18 clinical trials and found that taking iron tablets significantly reduced levels of fatigue in non-anaemic people.

They suggested that taking iron supplements and eating iron-rich foods should be recommended to anyone who is feeling fatigue.

You may also be flagging due to low levels of the hormone thyroxine.

This chemical affects the entire body’s metabolism and a lack of it slows down your brain.

About 2 per cent of the UK population are thought to have the condition, which is most commonly caused by the immune system attacking the thyroid gland.

‘The thing with hormones is they have a massive effect on all your body’s cells and tissues. They are the chemical messengers and they tell your body how it is doing, and what it should do,’ said Dr Hassain.

‘When you don’t have enough thyroxine it will slow down your brain, lower your mood, because it regulates your emotional processing,’ he added.

Doctors can test you for hypothyroidism by taking blood samples.

It is mostly treated using daily hormone tablets, but if left untreated it can lead to heart disease, pregnancy problems and swelling in your neck as well as fatigue.