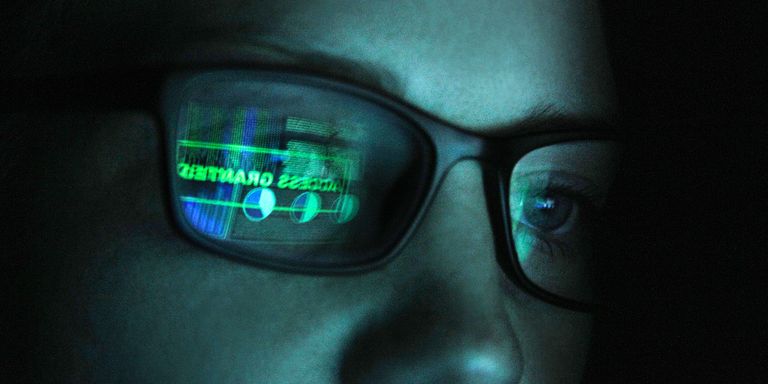 I am a smartphone addict.

My addiction gets even worse at bedtime, when I’m almost always answering emails on my phone or reading on my tablet—and I’m starting to feel the effects: dry eyes, headache, and blurred vision, all symptoms of digital eyestrain, according to The Vision Council.

Blue-light blocking glasses are the answer to my dependence, if you believe the claims. They use special lenses that block high-energy visible blue light from all sources. Often lenses have a yellow tint, although some brands offer more discrete versions.

Retailers like Lens Crafters and Zenni Optical rave that these miracle shades can help me sleep better, reduce digital eyestrain, and even protect against macular degeneration and permanent eye damage.

Oh, and they’re popular: “They are actually one of our fastest growing features,” says Sean Pate, director of public relations at Zenni Optical, who says the brand is currently selling around 2,000 pairs a day.

But do blue-light blocking glasses stand up to the hype—or are they all hype?

While people often associate blue light with phone screens, it can also come from fluorescent light, LED light, and even sunlight, according to the American Academy of Ophthalmology.

Blue light in particular has been linked to sleep issues, by delaying the release of melatonin (a sleep-inducing hormone), and disrupting the body’s circadian rhythm, according to a 2015 study in the journal Proceedings of the National Academy of Sciences.

Sellers of blue-light blocking glasses also claim blue light is linked to permanent eye damage, like vision loss, though there’s no solid evidence of that yet, per the AAO. (UV light, however, has been shown to increase the risk of eye diseases like cataracts and cancer.)

The biggest issue with screen time is digital eye strain, says Rahul Khurana, M.D., an ophthalmologist and vitreoretinal surgeon in Northern California and spokesperson for the AAO. It’s real, but it’s caused by focusing your eyes for extended periods of time without blinking—not by exposure to blue light.

Fortunately, digital eye strain symptoms are temporary and reversible—and you don’t need special glasses for it. You can, however, prevent and reduce digital eye strain by following the AAO’s 20-20-20 rule: While you’re in front of a screen, look at an object that’s at least 20 feet away for at least 20 seconds every 20 minutes.

Blue-light glasses also likely won’t protect your eyes from permanent damage—primarily because the theory that blue light causes eye damage isn’t backed by reliable science, says Khurana. “We try to move toward evidence-based medicine based on studies in people, and there aren’t any,” he adds. “It doesn’t make sense to spend money on something that has no real benefit.”

There is one thing blue-light blocking glasses might be able to do, however: help you sleep.

Because blue light has been shown to put you at risk for sleep-onset insomnia, says Lisa Medalie, Psy.D., behavioral sleep medicine specialist at The University of Chicago, blocking that blue light might negate that—especially if you can’t give up your screen time before bed.

“[Blue-light blocking glasses] have been presented as options for those who insist on using devices and still want melatonin produced,” says Medalie. In fact, a small 2009 study in the journal Chronobiology International found that people who wore blue-light blocking glasses for three hours before bedtime slept significantly better after three weeks. Still, this research isn’t conclusive.

You could also, you know, disconnect an hour before bed, take a hot bath, listen to music, or read a paper book instead of curling up with your smartphone, Medalie says.

I still want to try blue-light blocking glasses—are there any risks?

Blue-light blocking glasses haven’t been studied enough yet, so there aren’t any known consequences of wearing them, Khurana says. But putting those glasses on at night might strain your eyes in other ways not yet understood.

As for me, I can’t say I’d recommend blue-light blocking glasses. They were clunky and awkward and the yellow glare on my phone screen irritated my eyes at first. It also took me the same amount of time I’d normally take to fall asleep, so honestly, I wasn’t impressed.

The bottom line: If you’re glued to your phone screen at night, it might not hurt to try on a pair of blue-light blocking glasses—but don’t expect any miracles.