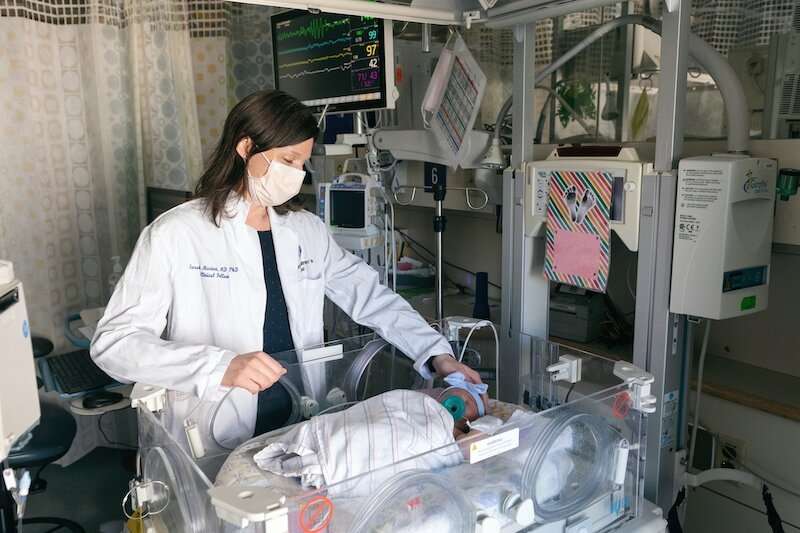 Aside from infections, congenital heart disease (CHD) is the leading cause of infant mortality. Informed by babies she sees in the NICU, Sarah Morton, MD, Ph.D., attending physician in the Division of Newborn Medicine at Boston Children’s, has devoted her career to understanding CHD’s genetic causes. Her findings are shedding light on what parents and care providers can expect as these babies grow up.

CHD is known to have a strong genetic component. Yet fewer than half of patients receive a genetic diagnosis, Morton says. Working in Boston Children’s Neonatal Genomics Program, and in collaboration with Amy Roberts, MD, director of the Cardiovascular Genetics Research Program, Morton aims to solve more cases, enabling more personalized approaches to improving neonatal health and developmental outcomes.

“Knowing the genetic diagnosis will allow us to improve care by anticipating patients’ particular needs and providing targeted care to improve outcomes after heart surgery,” she says. “It’s estimated that more than 400 genes contribute to CHD, but we have found only 200 of them.”

Variants in these genes are very rare and will require sophisticated genetic techniques to discover. Morton is pursuing virtually every possible avenue of investigation. The Pediatric Cardiac Genomics Consortium (PCGC), to which Morton belongs, has amassed a database of more than 16,000 children. About a fifth of them are patients at Boston Children’s. More than 5,000 consortium participants have had exome sequencing and more than 3,000 have had their complete genomes sequenced. This has led the to discovery of several new genes.

One thing that interests Morton is the frequent genetic connection between CHD and neurodevelopmental disorders. In the past, these disorders were often attributed to complications of heart surgery or simply having a weak heart. But these factors explain only about 30 percent of the risk, notes Morton.

The story of the TAF1 gene illustrates this point. Several years ago, Morton was reviewing the records of a patient born with a ventricular septal defect who also had hydrocephalus and global developmental delay. Through genomic sequencing, Morton and her colleagues found a variant in TAF1. This gene had never before been linked to CHD. But it had been linked to syndromic intellectual disability, intrauterine growth restriction, hypotonia, and dystonia/parkinsonism. Was it a plausible cause of CHD?

Morton began to nail the case when she encountered a second patient at Boston Children’s with a TAF1 variant, tetralogy of Fallot, and motor and verbal delays. Scrutinizing reports in the medical literature, she noticed that many patients with TAF1 variants and intellectual or developmental delay (ID/DD) also had cardiac findings, though they weren’t highlighted. In all, she identified 26 patients with TAF1 mutations in the literature, and found that about half had CHD. She reported these findings, corroborated by data from the PCGC, in a 2020 publication.

In related investigations, Morton collaborated with Ellen Grant, MD, Jane Newburger, MD, MPH, and other colleagues to conduct brain MRI studies in patients with tetralogy of Fallot and single-ventricle CHD. They found changes in brain folding that might predict which babies with CHD are most at risk for cognitive deficits such as impaired executive function later in life. Such infants might benefit from early interventions.

A link between CHD and cancer?

Another arm of Morton’s research is probing the genetic relationship between CHD and cancer risk. “We know that patients with CHD get cancer earlier and at a higher rate,” she says. “It’s hard to know if genetic variants are responsible, because cancer is so rare in children. I’m interested in enrolling patients and learning more.”

Morton notes that many genes that play key roles in early development can also act as cancer genes if their function is lost later. Last year, she published a study in JAMA Cardiology comparing 4,443 patients with CHD from the PCGC database with 9,808 controls. Those with CHD had a 30 percent increased rate of damaging variants in cancer-associated genes. These variants were most often found in patients who also had non-heart conditions, including ID/DD.

“If there is a link between CHD and cancer, that would be a huge indication for changing cancer screening approaches for patients with CHD,” Morton says.

Moving genes across the threshold

In search of more genetic causes of CHD, Morton is especially interested in variants in segments of DNA that do not encode proteins but instead regulate the expression of other genes—turning them on or off. As she detailed in a comprehensive article in Nature Reviews Cardiology, variants in these non-coding regions could account for some 55 percent of genetically unexplained CHD cases. Many of these variants arise after conception rather than being inherited, and they often affect genes that are expressed in the earliest heart cells to emerge.

And that’s another approach Morton is taking: looking for genes involved in heart development in general, aided by machine learning, and looking for variants in these regions in patients with CHD. She can then model their effects in human heart cells created through stem cell technology, in collaboration with the lab of William Pu, MD. She thinks this may fill in another 5 percent of cases.

As the NICU ramps up its genomic testing program, Morton can share genetic information with families of children born with CHD—provided that any variant identified has been properly vetted as a likely contributor.