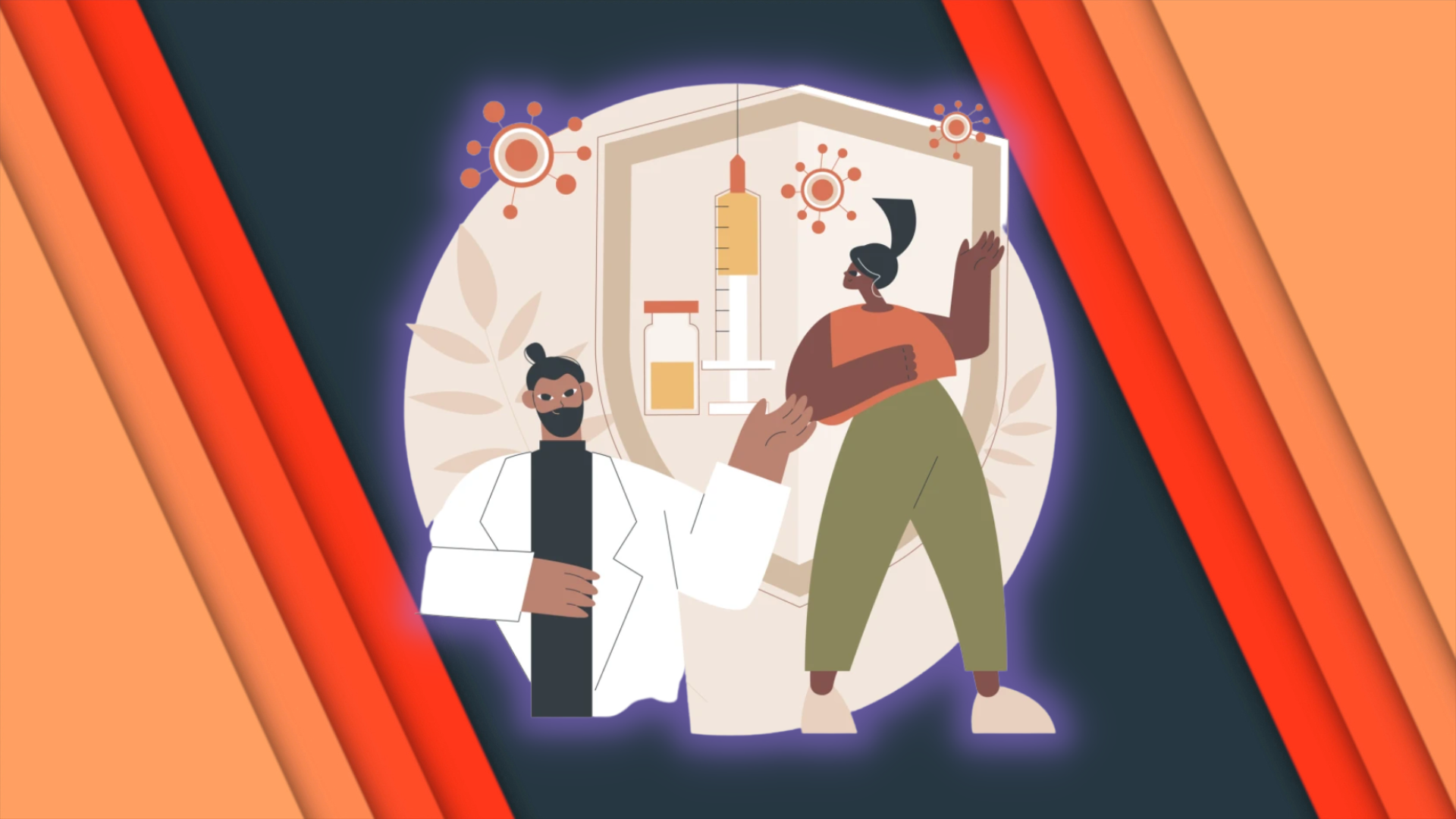 Despite the fact we have every piece of information we could ever need at our fingertips, it’s not always easy to find reliable facts around health online.

You head to ‘Dr Google’ to find an answer about symptoms or something you were told about a condition, only to find confusing clinical guidelines interspersed with dubious (and potentially biased) personal opinions; it’s not ideal.

Human Papillomavirus (HPV), first isolated from human cancer cells in 1983, is a relatively unfamiliar condition for most people, which makes it one mired in misinformation.

This group of viruses is likely so overlooked because, in some people, it causes no visible symptoms. In others, though, it can be linked to certain types of cancer, so it’s important to stay informed.

There are no ‘silly questions’ when it comes to health, but it can feel that way when you’re asking them in the doctor’s office.

That’s why, as part of our week-long series on HPV, we’ve taken the embarrassment out of things, asking doctors to debunk the most common myths surrounding HPV.

Whether you’re asking for a friend, yourself, or your teen who’s got a vaccination coming up, here’s everything you always wanted to know (but were too afraid to ask) about HPV.

Only women can get HPV

One of the most common misconceptions is that HPV is something only women can contract.

This is potentially because cervical cancer is one of the cancers more often linked to high-risk strains of the virus and girls aged 12-13 were initially given the HPV vaccine but not boys (although boys have been offered the vaccine since 2019).

However, the clue is in the name – it can affect all humans.

‘HPV stands for human papillomavirus,’ explains Dr Clare Spencer, GP partner and co-founder of My Menopause Centre. ‘This is a virus that infects the skin and mucous membranes such as the vagina, cervix, vulva, penis, anus and mouth.’

She tells Metro.co.uk: ‘There are many different types of HPV.  Some cause minor conditions such as warts on your feet. Others are more ‘high risk’ (particularly HPV-16 and HPV-18) and can lead to cancer of the cervix and also vagina, vulva, penis and some types of head and neck cancer.’

HPV is typically spread through sexual contact, which can lead to stereotyping that suggests you must be ‘promiscuous’ if you contract it.

Although she says that ‘the risk of getting a high risk HPV is greater if you have a greater number of sexual partners,’ Dr Claire adds: ‘This is nothing to be ashamed or embarrassed about – it simply means that the chances of coming into contact with the virus is higher.’

Because HPV has been linked to cancer, a diagnosis can cause fear among people who think it automatically leads to more serious issues.

However, for the majority, it won’t progress.

‘HPV does not always cause cancer,’ explains Dr Clare. ‘Most HPV infection is transient and the body clears it. It is only persistent infection with the high risk types of HPV that increases the risk of cancer.’

Dr Gill Lockwood, Consultant Fertility specialist at Fertility Family, also tells Metro.co.uk: ‘There are two types of HPV  (types 16 and 18) which are the cause of over 80% of all cervical cancers, and the vaccine is very effective against these types.’

While many STIs can be prevented by proper condom use, this isn’t the case for HPV.

Dr Clare says: ‘Using a condom will reduce the risk of transmission of HPV but won’t 100% prevent transmission from one person to the other.

‘This is because the virus can still be passed on from contact with skin that is not covered by the condom.’

Condoms are still a must as a barrier method to prevent pregnancy and protect against other infections, just don’t assume using one means you’re invulnerable to HPV.

You’d always know it if you had HPV

Where some STIs will make themselves known in the form of clear symptoms, HPV is less easy to detect without testing.

‘Usually, you would not know that you had had HPV infection unless it is picked up during the National Screening programme in the UK,’ says Dr Clare.

If you’re worried you may have HPV, speak to your GP or relevant health professional who can advise you further.

HPV doesn’t cause any visible symptoms

On the other hand, however, HPV isn’t always invisible.

As a group of more than 100 specific viruses that each behave slightly differently, there is a chance you could develop verrucas and warts on the hands, feet, and genitals.

Dr Gill says: ‘Genital warts are caused by some of the HPV types  (types 6 and 11) and produce symptoms such as lumps, itching or bleeding around the genitals. If you develop these symptoms, you should go to a sexual health clinic.’

According to Dr Clare, ‘HPV is common, infecting 8 in 10 women and men.’

Dr Gill adds: ‘Genital warts – which are caused by HPV and which are small growths around the genital area – are the most common viral sexually transmitted  (STI) in the UK.’

The dangers of HPV increase as the condition stays in your body (or if you repeatedly contract it). For that reason, it’s vital not to assume that a lack of visible symptoms means you’re in the clear.

‘If HPV doesn’t cause outward symptoms it doesn’t mean that it is harmless,’ says Dr Clare.

‘You can carry a high risk type of virus for many years before it causes problems and causes pre-cancerous and cancers changes.’

In 2008, the HPV vaccine was rolled out in schools for girls in year 8 or S1 in the UK, followed by boys of the same age being offered the jab.

Whether you’ve had this or not, however, try not to assume a vaccine completely shields you from HPV for life.

‘Studies have shown that the vaccine protects against the most dangerous strains of HPV for at least 10 years,’ says Dr Gill.

‘But because it does not protect against all the types of HPV that can cause cervical cancer, it is important that all women, including those who have received the vaccine, attend for cervical screening once they reach the age of 25.

‘Even young women less than 25 years of age should be aware that irregular bleeding or bleeding after intercourse needs investigation. Young women like Jade Goody are still dying from cervical cancer.’

The Gardasil vaccination, which has been used since 2011, protects against a number of strains of HPV, including high-risk HPV16 and HPV18, plus HPV6 and HPV11 which cause the majority of genital warts.

‘It will not protect against all cancers. The HPV vaccination does not stop sexually transmitted infections such as chlamydia, so its important to practice safe sex even if you’ve had the vaccination.’

This week, Metro.co.uk is looking at HPV and its related cancers from a range of perspectives.

HPV is something that eight in 10 of us will encounter at some stage of our lives. It’s spread through skin-to-skin contact, not just penetrative sex. There is even some evidence to suggest it can spread through deep kissing.

It isn’t tested for in a standard sexual health screening, so it’s near impossible to know when or where a person might have contracted it or who they might have passed it onto.

For most people, their bodies will fight the virus off in around one to two years without any lasting effects. For some people however, it can make them more vulnerable to cancers of the cervix, anus, head and neck, penis, vagina and vulva.

Over this week, we’ll be exploring the human issues that come with HPV and its related cancers.