Texas grandmother, 61, beat lung cancer on the SAME DAY she was diagnosed — after doctors decided to act fast while carrying out biopsy

A Texas woman has been cured of lung cancer — just hours after receiving a diagnosis.

The grandmother went for one of her routine checks in January when a scan showed a nodule on her right lung.

She was called into the Texas Health Harris Methodist Hospital clinic in Forth Worth in spring where further tests revealed she had very early-stage lung cancer.

Doctors had already put her under local anesthetic to do the biopsy and decided to operate there and then.

Using a robotically-guided ultra-thin catheter, they were able to make tiny incisions and pull out the tumor, known as minimally invasive thoracic surgery.

Three days later, Ms Boudreau was back to normal and up and about walking at home.

She said: ‘You pinch yourself because you can’t believe it’s true. This was all so simple, with no radiation or chemo.’ 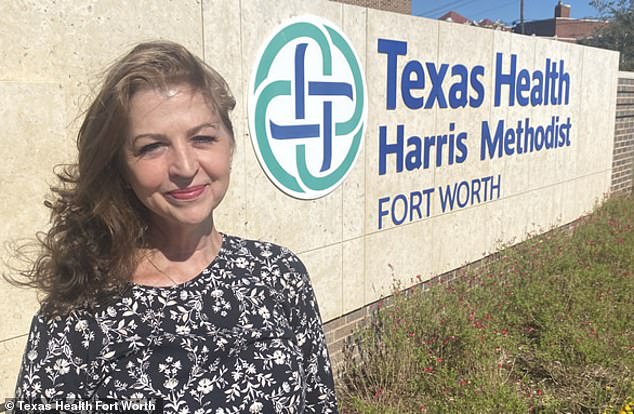 Lung cancer is one of the most common and serious types of cancer.

Around 130,180 Americans die from the condition every year in the US.

There are usually no signs or symptoms in the early stages of lung cancer, but many people with the condition eventually develop symptoms including:

– an ache or pain when breathing or coughing

You should see a physician if you have these symptoms.

There are two main forms of primary lung cancer.

These are classified by the type of cells in which the cancer starts growing.

– Non-small-cell lung cancer. The most common form, accounting for more than 87 per cent of cases.

– The type of lung cancer you have determines which treatments are recommended.

Although people who have never smoked can develop lung cancer, smoking is the most common cause (accounting for about 72 per cent of cases).

This is because smoking involves regularly inhaling a number of different toxic substances.

It would have been her fourth battle with cancer — Ms Boudreau survived Hodgkin’s lymphoma twice in 1984 and 1985 and breast cancer in 2002.

It is one of the first hospitals in the state to adopt the new technology.

Doctors use a robot to guide an ultra-thin catheter to reach lesions in hard-to-reach areas of the lung.

The tumor is then pulled out through one of the incisions.

Dr Richard Vigness, a thoracic cardiac surgeon at the hospital, said: ‘The lung tissue containing the cancer is removed without the previously used large incision and the trauma of spreading the ribs associated with it.’

Ms Boudreau awoke from surgery to find that she had had cancer, but was now free from the disease.

Her operation took just five tiny incisions on her side and she was allowed to go home from hospital the next day.

She said: ‘I took pain pills for three days, and that’s all I needed. Within three days later, I was just normal, walking around. I couldn’t believe it.’

Ms Boudreau gets a CT scan every six months and is still cancer-free.

Her only warning sign had been slight difficulty breathing.

She said: ‘I was kind of a little bit out of breath, but I didn’t know [it was cancer]. I just thought it was aging.’

Although people who have never smoked can develop lung cancer, smoking is the most common cause (accounting for about 72 per cent of cases).

This is because smoking involves regularly inhaling hundreds of toxic substances.

Treatment depends on the type of mutation the cancer has, how far it’s spread and how good your general health is.

If the condition is diagnosed early and the cancerous cells are confined to a small area, surgery such as the one used on Ms Boudreau can remove the affected area of lung.

If surgery is unsuitable due to general health, radiotherapy to destroy the cancerous cells may be recommended instead.

If the cancer has spread too far for surgery or radiotherapy to be effective, chemotherapy is usually used.

There are also a number of medicines known as targeted therapies.

They target a specific change in or around the cancer cells that is helping them to grow.

Targeted therapies cannot cure lung cancer but they can slow its spread.