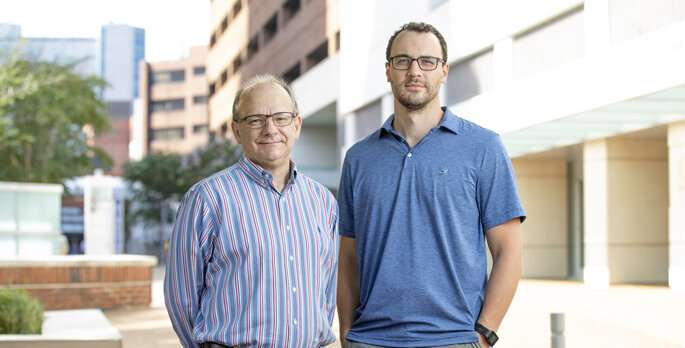 Vanderbilt researchers have identified a protein that is key to the “education” of immature T cells in the thymus. The findings, reported in the Journal of Experimental Medicine, could inform therapeutic strategies for enhancing thymic function when desired—such as during aging, recovery from radiation therapy or chemotherapy, or other conditions that reduce T cell output.

T cells play multiple roles in the immune response. “We think of T cells as being the most important cells of the immune system, because they kill infected cells and also tell other cells, including antibody-producing B cells, what to do,” said Luc Van Kaer, Ph.D., Elizabeth and John Shapiro Professor of Pathology, Microbiology and Immunology.

To perform their many roles, T cells must recognize and respond to all the pathogens that exist—and to those that don’t exist yet. But T cells need to avoid responding to non-pathogens, such as food proteins and the “friendly” bacteria residing in our bodies, and most importantly, they must not respond to our own healthy cells.

That’s where the thymus comes in. It is an organ of the immune system located in the upper part of the chest behind the sternum that serves as a sort of T cell academy, educating and training immature T cells to respond to invaders, but not to self.

Epithelial cells in the thymus chop up their own proteins and present them on the cell surface in combination with MHC (major histocompatibility complex) proteins. Immature T cells that react appropriately—their T cell receptors are functional, but they don’t respond too vigorously to the self-proteins—graduate from the thymus academy.

In the current studies, led by graduate student Luke Postoak, the researchers explored the role of the protein Vps34 in thymic T cell education. Vps34 is a lipid kinase that participates in intracellular protein trafficking and autophagy, a “self-eating” process that degrades and recycles cell components.

The researchers deleted the Vps34 gene specifically in thymic epithelial cells in mice and found that the thymus degenerates more rapidly than usual. In normal human development, thymus function peaks around puberty and then declines as we age.

The mice without Vps34 in thymic epithelial cells “had an advanced rate of decline in the thymus, so that by the time they were ‘adolescents,’ they had already lost their thymic function,” Postoak said.

The researchers also found that these mice did not produce normal levels of CD4 “helper” T cells. The findings show that Vps34 is important for the maturation of CD4 T cells, but not CD8 T cells.

CD4 T cells are targeted by HIV. Even when HIV infection is successfully treated and the virus is suppressed, people with HIV have reduced numbers of CD4 T cells, Van Kaer noted.

“Our findings may help develop methodologies to rejuvenate the thymus in situations where you have defective development of CD4 T cells, as in HIV infection,” Van Kaer said.

The decline in thymic function with aging might also be improved by targeting Vps34.

“If there was a way to increase the activity of this enzyme specifically in thymic epithelial cells, that might prolong thymic function later in life and keep us producing higher levels of T cells,” Postoak said.

The findings add Vps34 to a small collection of molecules that have been identified as critical for the thymic education process.