The world cancer league tables: Scientists calculate the countries with the best and worst performing statistics for 29 forms of the disease

Scientists have revealed which countries have the highest and lowest levels of cancer, and where in the world the most people die of the disease.

In the biggest ever study of 195 countries, researchers produced top ten tables for the best and worst performing countries for 29 types of cancer.

Australia has the highest overall level of new cases of cancer, based on figures from 2016, while Mongolia has the most deaths.

Lung, bowel and breast cancer are the most common forms of the disease worldwide, while lung, bowel and stomach are the biggest killers.

The UK has the eighth highest level of new diagnoses and is the world’s worst performing country for mesothelioma – a cancer caused by asbestos exposure.

Experts say the number of cancers caused by lifestyle factors such as smoking and an unhealthy diet is on the rise, but there is ‘substantial potential’ for preventing them. 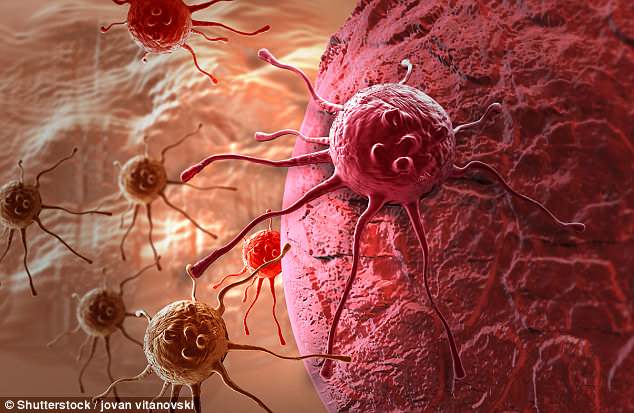 Cancer develops when the body’s cells grow and multiply uncontrollably, potentially forming tumours and damaging health cells – it can happen almost anywhere in the body

The Global Burden of Disease (GBD) study analysed global levels of 29 cancers including of the lung, brain, bowel, skin, breast and prostate.

The study found death rates have decreased in most countries, but the number of new cases has risen.

Breast cancer is the one which kills the most women, while lung cancer is more fatal for men, and the biggest cancer killer overall.

UK the worst for rare mesothelioma

The UK has the eighth highest levels of cancer in the world, and the most cases of – and deaths from – mesothelioma, with six times the global average number of diagnoses.

Mesothelioma is a rare condition which most commonly starts in tissue around the lungs, and is known to be caused by inhaling asbestos fibres.

Cancer is the name given for a collection of diseases which are caused by cells growing uncontrollably, often into tumours.

Cancer cells can appear almost anywhere in the human body and may multiply so much that they spread around and destroy healthy tissue.

Treatment can be gruelling and often involves surgery, using radiation, or chemotherapy – drugs which destroy cancer cells and can also destroy healthy ones.

The GBD found the number of cancers contributed to by unhealthy life choices has risen since 2006.

The study was organised by the University of Washington and published in the journal JAMA Oncology yesterday.

The university’s Dr Christina Fitzmaurice said: ‘While the increase in lung, colorectal, and skin cancers over the past decade is concerning, the prevention potential is substantial.

‘Vital prevention efforts such as tobacco control, dietary interventions, and broader health promotion campaigns need to be scaled up in response to this rise in lifestyle-related cancers.’

Researchers analysed countries using a detailed socio-demographic index (SDI) – a measure of how developed a country is.

The study found more people get cancer and die of it in high SDI – more developed countries – but rates are increasing fastest in middle SDI countries, ones which are neither particularly poor nor wealthy.

‘And improving access to advanced diagnostic technologies not commonly available in low-SDI countries is a critical step toward achieving health equity globally.’