A new study finds medically assisted detox is better for moms and babies. 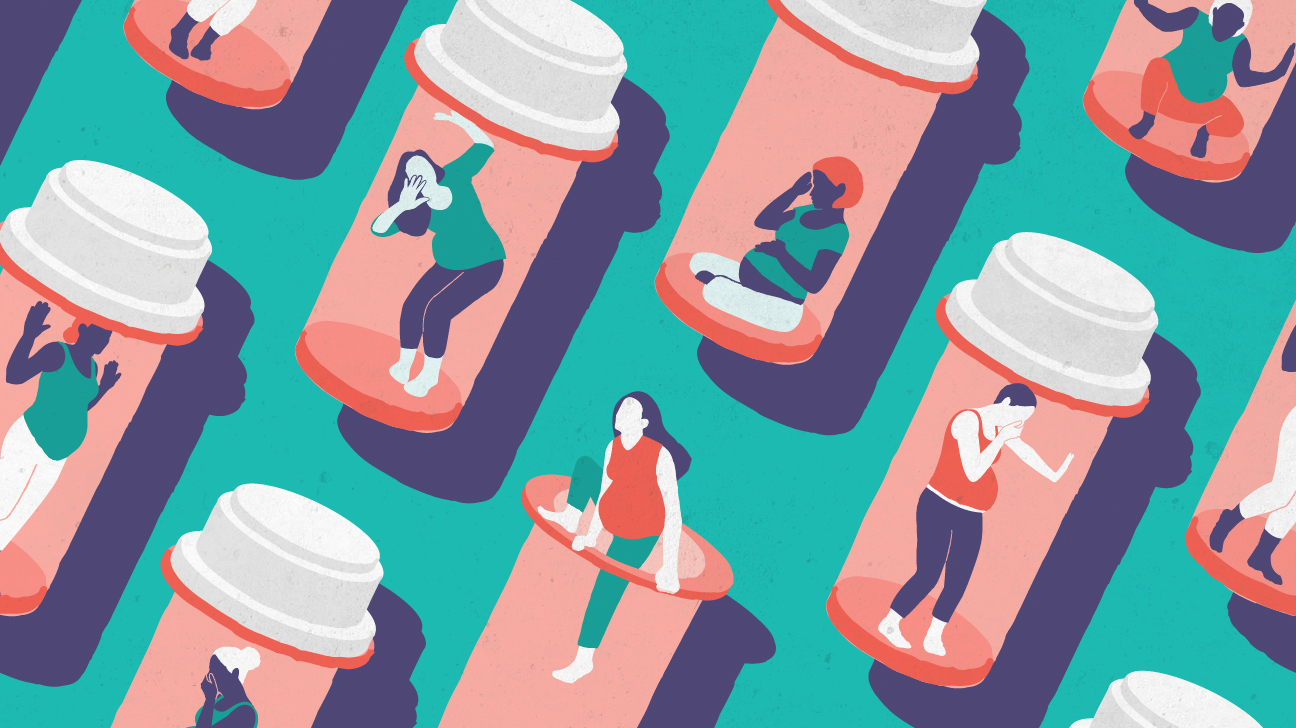 At the age of 14, Brittany Scheihing started to get migraines. Doctors told her they’d eventually go away as she got older.

Only they didn’t. In fact, as Scheihing aged, her migraines became only worse, with bouts of vomiting, impaired vision, and other debilitating effects.

For years, beta-blockers seemed to help ease the pain. But when Colorado-based Scheihing got pregnant in her early 20s, she was told the medication would be harmful to her baby.

To protect her and her developing baby, her doctor prescribed oxycodone — a powerful opioid.

With that prescription, Scheihing became one of millions of patients to be prescribed opioids by a doctor, only to become dependent on the drugs.

These kinds of prescriptions helped kick off the “first wave” of the ongoing opioid epidemic, according to the Centers for Disease Control and Prevention (CDC). It’s an ongoing crisis that leads to 115 Americans dying every day.

Up to 22 percent of pregnant women are prescribed opioids during their pregnancy, according to a 2016 study.

Over the past 10 years, the rate of pregnant women who are dependent on opioids has steadily increased in the United States. In fact, on average, about 21,000 pregnant women aged 15 to 44 misused opioids in the past month, according to combined 2007 to 2012 national surveys on drug use and health from the Substance Abuse and Mental Health Services Administration.

Pregnant women taking opioids during pregnancy are at risk for having infants who are born dependent on opioids with a condition called neonatal abstinence syndrome (NAS).

These infants are at risk of being born at a low birth weight as well as having seizures and feeding problems.

Figuring out how to treat these women and whether doctors should advise a “cold turkey” detox has been the subject of multiple studies and at the center of political and medical controversies.

While many studies have found that medically assisted treatment with methadone or buprenorphine is recommended over full detox, in some areas doctors still recommend an immediate unmedicated detox in the hopes of keeping infants from developing NAS.

In April, a meta-analysis published in Obstetrics and Gynecology looked at the various approaches of treatment for women who are pregnant and dependent on opioids. The large review assessed 15 previously conducted studies that involved some 2,000 women.

Researchers found that there was little difference in the number of miscarriages between women who detoxed cold turkey (1.2 percent) and those who didn’t detox (2 percent).

The studies analyzed included a variety of programs to treat women, including three studies where women who were incarcerated and underwent “involuntary withdrawal” as a result. While some of the studies were conducted decades before the current opioid crisis, 10 were conducted since 2000.

Ultimately, researchers found evidence that detox with no medication increased the likelihood of relapse and, therefore, the fetus would be exposed to more opioids.

“Our review does not support detoxification for the prevention of neonatal abstinence syndrome as a result of the high rate of relapse and, therefore, continued fetal opioid exposure,” the researchers wrote. “Furthermore, relapse as reported in the included studies was likely underreported as a result of lack of follow-up beyond the immediate postpartum period as well as high lost-to-follow-up rates across all studies.”

Using the data before them, the researchers conclude that medication-assisted treatment over detoxification for pregnant women who are opioid dependent is the best treatment plan.

“Our review supports the recommendations of the American Society of Addiction Medicine, the American College of Obstetricians and Gynecologists, and the World Health Organization, which promote pharmaco-therapy over detoxification for opioid use disorder in pregnancy as a result of low detoxification completion rates, high rates of relapse, and limited data regarding the effect of detoxification on maternal and neonatal outcomes beyond delivery,” the report stated.

What happens to women trying to get help?

Dr. Jessica Young, an OB-GYN at Vanderbilt University Medical Center in Tennessee, said there’s been a lot of interest in the medical community about the best way to treat women who are pregnant and taking opioids.

“It’s really fueled by wanting to reduce the dependency rates in infants,” she said.

It’s true that untreated opioid use in pregnancy usually results in negative outcomes for the mother and child — dependency being the most serious.

But detoxification doesn’t automatically result in positive outcomes either, according to Sarah Dauber, PhD, associate director of adolescent and family research at The National Center on Addiction and Substance Abuse.

Dauber told Healthline there are still many health professionals who believe that detox constitutes treatment for opioid addiction. In some cases, detoxification is necessary, she said, but without any follow-up, that type of treatment isn’t effective.

Pregnant women who are dependent on opioids aren’t any different.

“When it comes to pregnant women, many healthcare and treatment providers think they should be detoxed from opioids, despite clinical guidelines to the contrary,” Dauber said. “As is true of treating opioid use disorder in the general population, research supports the use of medication-assisted treatment for opioid use disorder in pregnant women.”

Women who are given medicated treatment for opioid dependency often have infants with less severe NAS than if they were untreated or if they relapsed.

The legal issues for pregnant women on opioids

Women can also face increased stigma and even be threatened with arrest if they continue to use opioids during pregnancy.

In some states such as Tennessee, women have been arrested and charged with child endangerment if their child was born with NAS.

In addition to legal threats, there are often few programs to treat people with opioid use disorders. Wait times can be especially long at facilities willing to treat pregnant women with an opioid addiction.

This can complicate the ability for women to seek help and get medicated opioid treatment, increasing the risk their children will have severe NAS.

Scheihing has given birth twice, and both times she was dependent on opioids. She never received any treatment for her dependency while she was pregnant.

Scheihing said her doctors made her go to one meeting about addiction when they first put her on oxycodone, but that was it.

Her daughters, however, didn’t show signs of addiction at birth. But both weighed less than 5 pounds and had trouble regulating their temperatures. Her oldest child also spent a week in the NICU.

Scheihing said she continued to take prescribed oxycodone between her pregnancies in part because she had a series of health issues, including gallbladder surgery and wisdom teeth removal. But also because, by then, she had developed a dependency on the drug.

During her second pregnancy, her doctor put her back on beta-blockers and reduced her opioid dosage. Scheihing said that’s about the same time she started to admit she had a serious problem.

Two months after giving birth to her second child, Scheihing decided to seek treatment. When she made the choice, her husband took time off to help her detox at home.

“For the first three days I was on the bathroom floor,” she said. “You have shaking, sweating, diarrhea, pain. Every inch of you is screaming.”

About a month into the outpatient program, Scheihing was placed on Subutex. The generic name is buprenorphine, a common drug used to treat opioid use disorders. Methadone is another.

Young, who runs Vanderbilt’s Drug Dependency Clinic, said the use of methadone and buprenorphine in opioid-dependent pregnant women gives the baby a fighting chance.

She said that pregnant women who are actively in the opioid cycle of addiction have a 70 percent chance that their baby will also be addicted. But if the mother is on a medically assisted detoxification program, that risk of addiction for the infant tends to drop.

“With methadone, that risk for the infant drops to 50 percent and 30 percent if the detoxification is assisted through buprenorphine,” she said. “That rate may even be lower depending on where the mother lives.”

Many of the pregnant women in Young’s program are taking buprenorphine. She said the success rate varies, because not all women respond to treatment in the same way. Plus, many of these women have ongoing mental illness issues, including trauma and post-traumatic stress disorder (PTSD), that have to be addressed as well.

“A majority do well during pregnancy,” she said. “Some relapse. It’s the nature of addiction.”

Young welcomes the systematic review published last month. She said it can help quell the idea that detoxification alone is the best bet for pregnant women and their baby.

Young noted that because so few physicians have a proper education about addiction and treatments, they sometimes end doing nothing, as in the case of Scheihing.

“Patients get abandoned,” she said. “I see it all the time.”

What she’d really like to see is randomized-controlled trials for this population. She points outs that the systematic review could only find 15 studies to analyze, which isn’t much to go on. A controlled trial can provide evidence-based solutions.

“We still don’t know if there is a safer way to detox, because all of the studies do it differently,” Young said. “There is still a long list of unanswered questions.”

For Scheihing, she’s trying to take things one day at a time. Her daughters and husband are great sources of inspiration, and she’s found strength in the friendships she’s made in her program.

Having just completed an outpatient program, Scheihing said it helps to know she’s not alone in her quest to stay opioid-free. She hopes that by coming forward, her story can inspire others.

“Most of us are trying to do the best we can,” she said. “I just want to be able to help other moms.”