Most heart attack survivors develop terminal heart failure that confines them to a lifetime of weakness and agony – but a new device could prevent that.

The device, developed by MIT and Harvard researchers, delivers drugs straight to the heart through a tube to prevent the heart from repairing itself badly.

After an attack, the heart rushes to patch up the scarred vessels. The process is remarkable but imperfect, and usually results in ‘valve failure’, narrowing avenues that need to be open or blocking some altogether.

While we have the right drugs to prevent it, there is no effective method that keeps the drugs in the right place for long enough.

But a new study, published today, claims to have the answer: researchers designed a port that fits under the patients’ skin connecting to a ‘refill line’ that delivers drugs direct to the vessels – and have already prevented or reversed heart disease in rat models.

The device has been hailed as a breakthrough in targeted drug delivery – and may even be used for other conditions, including diabetes. 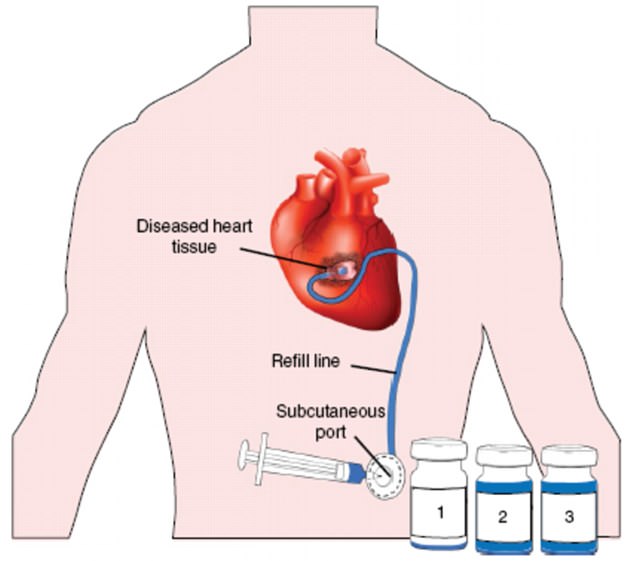 ‘After a heart attack we could use this device to deliver therapy to prevent a patient from getting heart failure,’ explains Professor Ellen Roche, co-first author of the study, who started the research during her PhD at Harvard and concluded it in her current role as assistant professor of mechanical engineering at MIT.

‘If the patient already has some degree of heart failure, we can use the device to attenuate the progression.’

‘This has been a really exciting study which opens a lot of research questions and could be used for many other applications,’ she added. ‘It’s only just the start.’

Currently, there are two ways to get drugs to the heart in the wake of a heart attack if the patient is stabilized. Neither method, however, is seen as at all effective.

First, the patient can simply ingest the drugs orally, loading their body with ACE inhibitors (such as Lotensin or Altace), which are designed to prevent the arteries from narrowing. However, given the risk of side effects to other parts of the body, the patient cannot take a high enough dose to be sure it will work.

‘From a pharmacological point-of-view, it’s a big problem that you’re injecting something that doesn’t stay at the damaged tissue long enough to make a difference,’ says William Whyte, co-first author and PhD candidate at Trinity College Dublin and AMBER.

Failing that, the patient can undergo multiple invasive heart surgeries to inject the drug directly into the heart muscle – but this, clearly, comes with another set of debilitating side effects that can render the entire process futile.

The new device, named Therepi, involves one invasive procedure to implant it, before limitless targeted refills without having to open up the patient again.

Professor Roche worked with a team of researchers in the US and Ireland to design a reservoir that would be flexible, could adapt to the human body, and allow cells to grow around it.

They settled on a gelatin-based polymer tube that runs through the body.

This connects to a flat bottomed port, which attaches to the diseased tissue, made of semi-permeable membrane.

It means the reservoir becomes a ‘cell factory’, keeping the cells there where they produce vital ingredients to healed damaged tissue, rather than passing through the membrane into the heart.

In a rat model, the device was shown to be effective in improving cardiac function after a heart attack.

The researchers administered multiple doses of cells to a damaged heart throughout a four-week period.

They then analyzed the hemodynamic changes in the tissue using a pressure volume catheter and used echocardiography to compare functional changes over time.

The malleable material can be reshaped to allow more drugs to pass directly into the heart tissue.

‘The material we used to construct the reservoir was crucial. We needed it to act like a sponge so it could retain the therapy exactly where you need it,’ Dr Whyte added.

‘That is difficult to accomplish since the heart is constantly squeezing and moving.’

The reservoir provides a unique opportunity for administering stem cell therapies, and it goes beyond treating heart disease.

‘We are hoping to use the device itself as a research tool to learn more about the optimal drug loading regime,’ says Roche.

For the first time, researchers could have an opportunity to track multiple refills of localized therapies over time to help identify the best dosing intervals and dose amount.

‘As a pharmacist by training, I’m really excited to start investigating what the best dose is, when is the best time to deliver after a heart attack, and how many doses are needed to achieve the desired therapeutic effect,’ adds Whyte.