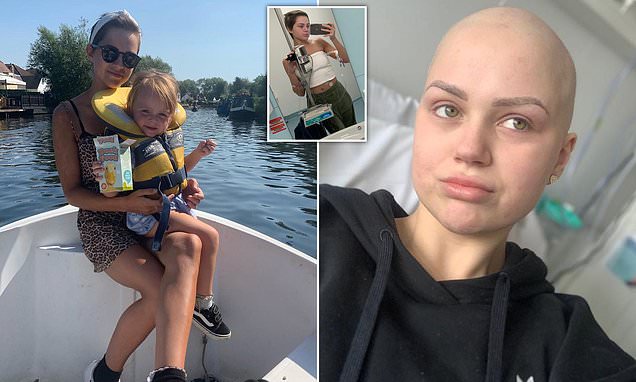 Mother, 20, whose GP said her back pain was sciatica is diagnosed with a rare CANCER which is normally only found in children under five

A mother whose GP said her back pain was sciatica was diagnosed with a rare cancer found mainly in children under five.

Lois Parker, 20, a sales assistant from Hatfield, Hertfordshire, was troubled by severe back pain in April 2018.

Convinced it was something more serious than sciatica, she did some digging on Google and was able to get a referral for scans by a different doctor.

A growth was found on her pelvis which needed to be biopsied, and Ms Parker, who is mother to Lexi, two, began preparing herself for the worst.

In September 2018,  she was given the devastating news she had an extremely rare cancer called neuroblastoma, five months after her symptoms started.

The cancer affects just 100 children in the UK a year. So doctors were baffled by Ms Parker’s diagnosis at 19 years of age.

Rushed through for treatment, there was no time Ms Parker to harvest and freeze her eggs, so she is thankful to be a young mother. 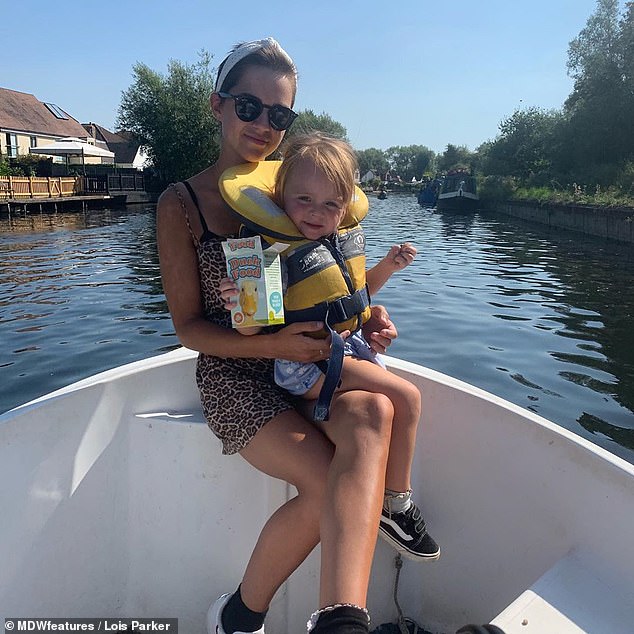 Lois Parker, 20, from Hatfield, Hertfordshire, had no idea her back pain would turn out to be a rare cancer found mainly in children under ten. She is pictured recently with her daughter, Lexi 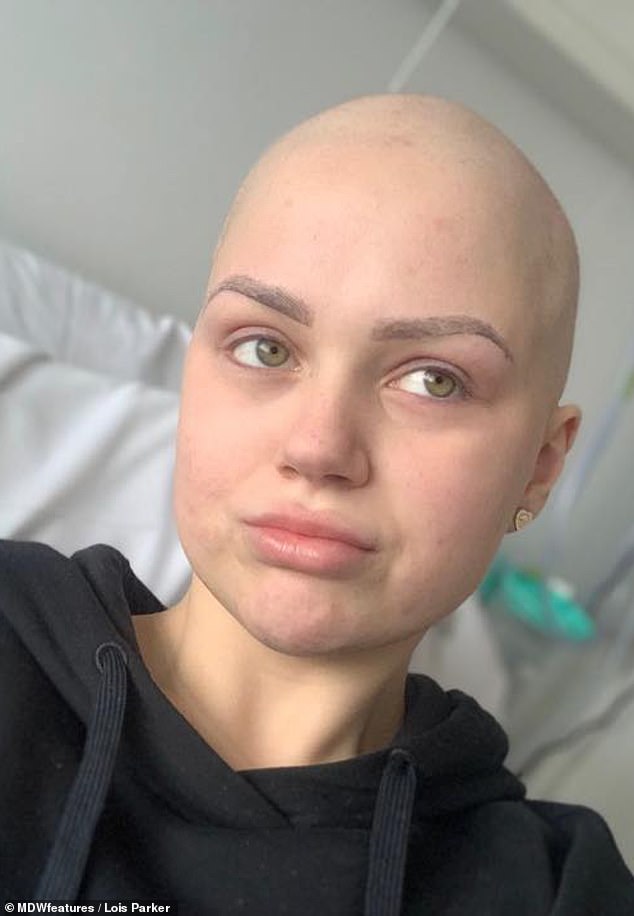 In September 2018, Ms Parker was given the devastating news she had an extremely rare cancer called neuroblastoma. She is pictured during chemotherapy 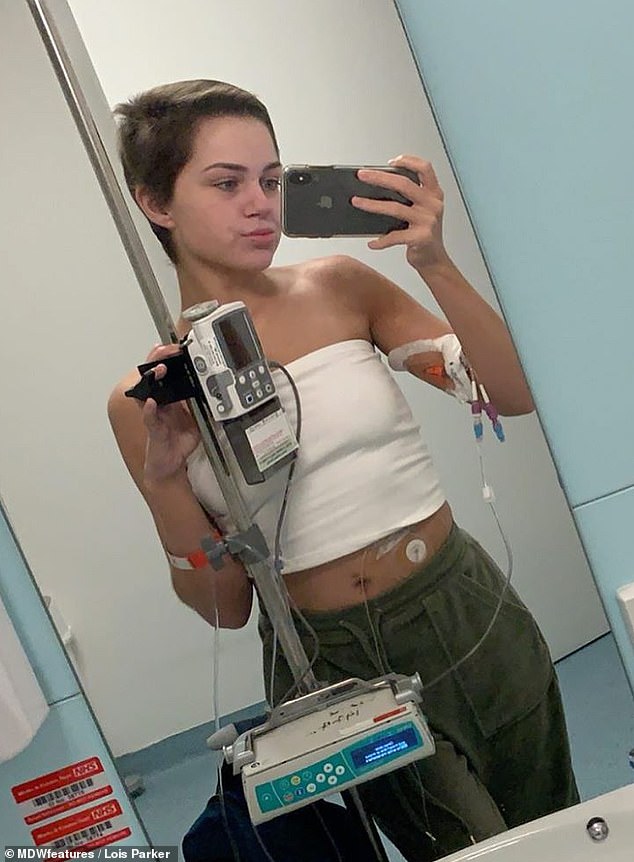 Rushed through for treatment, there was no time for Ms Parker to harvest and freeze her eggs, so she is thankful she is a young mother. She is pictured recently 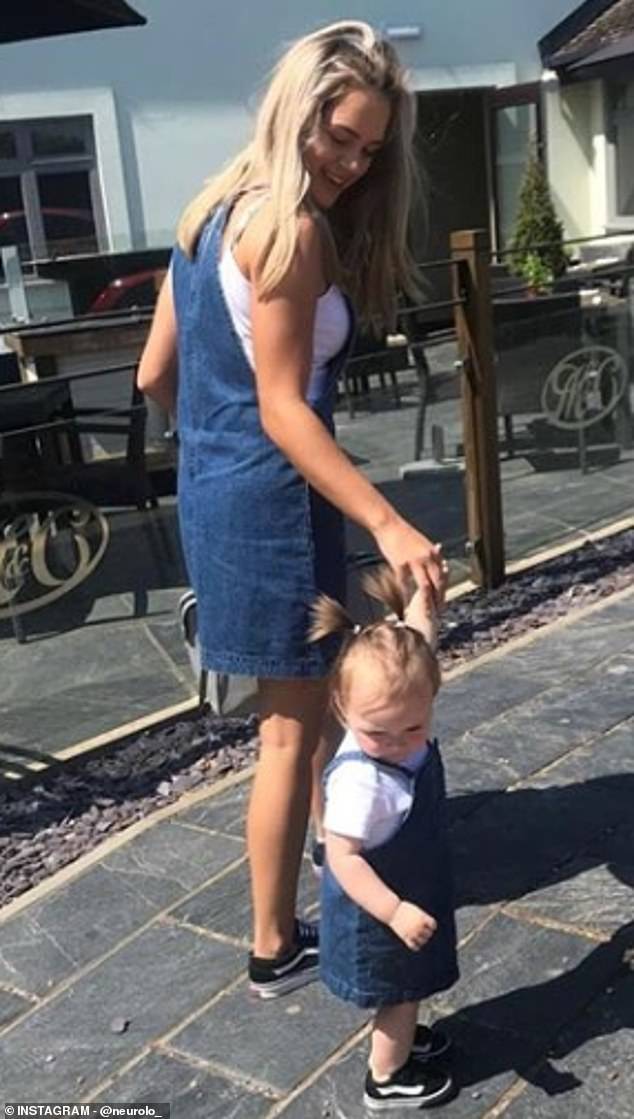 Ms Parker, pictured with Lexi before her diagnosis, was troubled by severe back pain in April 2018 for which she saw her doctor repeatedly

Ms Parker said: ‘I can’t help with wonder what if these tests were done months earlier.

‘Cancer will never apologise, and no one is promised a tomorrow; freak car accidents happen, cancer happens and many other life changing events.

‘I never saw a point in being sad about my diagnosis because that wouldn’t change it.

‘All the while, I’ve been raising my beautiful little Lexi. I try to keep her as unaware as possible, however it’s not always that easy.’

After receiving a diagnosis of sciatica, Ms Parker Googled her symptoms because she thought there must have been something at the root of the problem.

She said: ‘I didn’t really understand because in my head sciatica is a symptom not a diagnosis. Sciatica is a nerve being irritated, so I wondered what was causing it.’

A number of potential causes came up in her search, including a slipped disc, crushing spine, a fracture or cancer.

Wanting a proper diagnosis, and barely able to walk from the back pain, Ms Parker went to a consultant she had for knee surgery in the past.

He ruled that she did not have sciatica because she could step on her tip toes. He ordered Ms Parker have an MRI within two weeks.

In June 2018, the scan revealed shadowing on Ms Parker’s spine and a growth on her pelvis, so a second MRI and a CT scan were scheduled.

Following this, Ms Parker was referred to a sarcoma specialist at University College London Hospital for a biopsy. 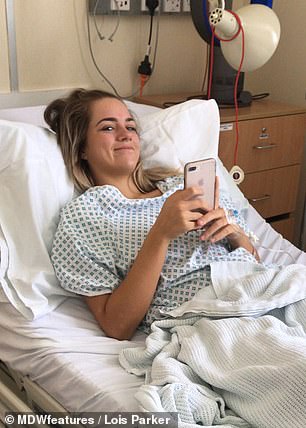 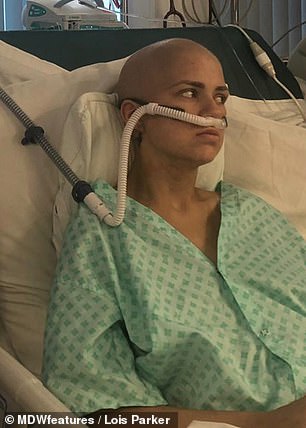 Five months after her severe back pain started, Ms Parker was told she had cancer

A consultant ruled sciatica out because Ms Parker could step on her tip toes. He ordered Ms Parker have an MRI within two weeks (pictured, scans of her back)

She said: ‘From then the worst became apparent. You know it’s not going to be good, but you hope it’s not the worst.

Neuroblastoma is a rare cancer that affects children and usually starts in the abdomen.

Around 100 children, who are typically under five, are diagnosed every year in the UK.

The disease affects approximately 800 new children annually in the US.

In around half of cases, neuroblastoma spreads to other parts of the body, particularly the liver and skin.

Neuroblastoma’s cause is unclear. There may be a family-history link.

The main symptom is usually a lump in the abdomen, which may cause swelling, discomfort or pain.

If the disease affects the spinal cord, it can lead to numbness, weakness and loss of movement in the lower part of the body.

Treatment depends on how advanced the cancer is and the risk it will return after therapy.

Surgery, and chemo and radiotherapy, are commonly used.

‘I mentally prepared myself for everything and from then I knew I had no choice but to fight whatever was coming.

‘It was confirmed that I had cancer in late August, but they weren’t sure of the precise diagnosis.’

Initially doctors thought Ms Parker had Ewing sarcoma, cancer that grows in the bones or cartilage, affecting people up to around the age of 20.

In September, it was confirmed that Ms Parker had neuroblastoma, a type of cancer which is most typically found in babies and children.

Aged 19, Ms Parker was almost twice the age of the age bracket for this cancer.

Figures for adult neuroblastoma are not clear because it is so rare.

The cancer develops from immature nerve cells found in several areas of the body, most commonly the pelvis and abdomen.

The most common symptoms are poor appetite, weight loss and lethargy. But because it can start anywhere in the body, the symptoms are varied, from constipation to weakness in the legs.

Mr Parker said: ‘They had no idea why I had developed a child’s cancer – everyone was so shocked.

‘Neuroblastoma itself is rare, but on average only one case per ten million are diagnosed with it. Because of this, the staging systems and risk assessment tools have been developed using primarily paediatric data.

‘However, my consultant says that it’s much harder and prognosis is worse, but he is hopeful.

‘I didn’t cry, I was just in a mindset that I would win. Cohabitation with cancer is better than losing a battle to cancer.’ 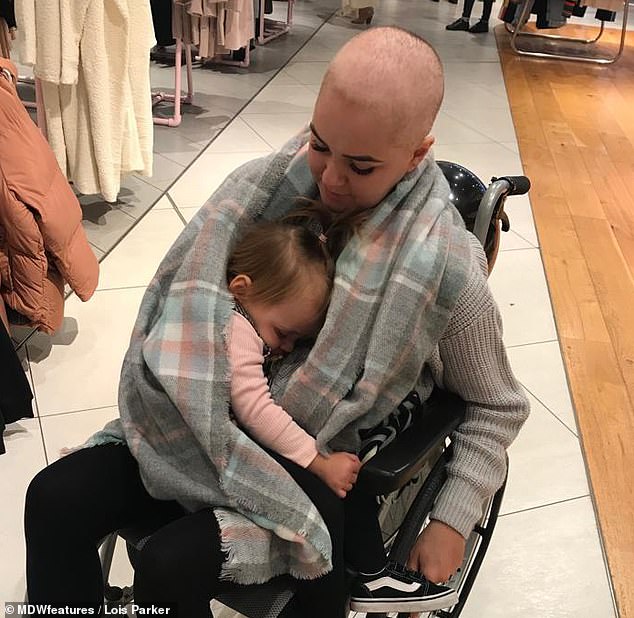 Ms Parker said: ‘All the while, I’ve been raising my beautiful little Lexi. I try to keep her as unaware as possible, however it’s not always that easy’ 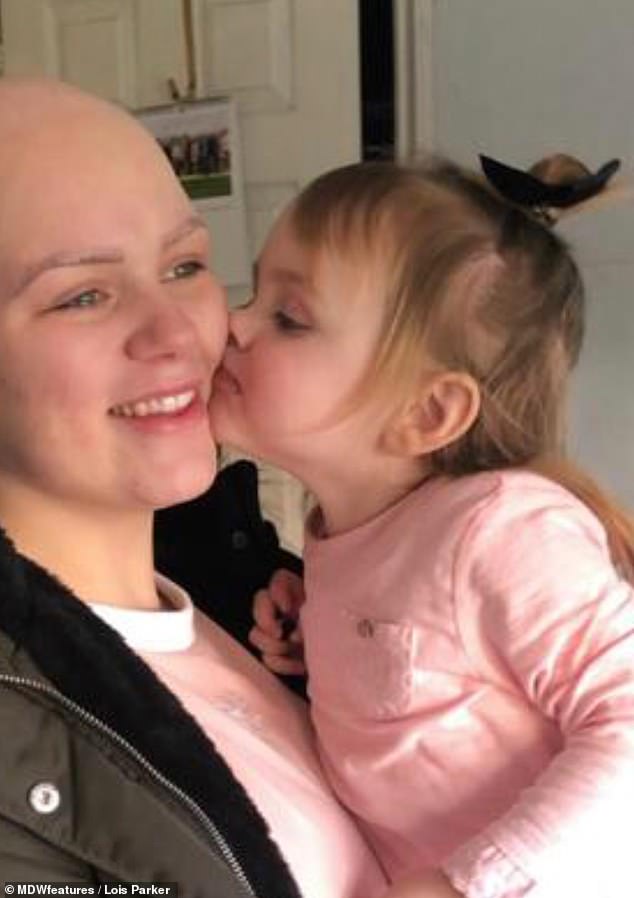 Ms Parker was diagnosed with stage four neuroblastoma, meaning the cancer has severely spread through her body. She is pictured with Lexi, two

Ms Parker had stage four neuroblastoma, meaning the cancer has severely spread through her body.

The aggressive nature of her cancer meant Ms Parker had to begin treatment within a week, which meant there was no time to harvest any eggs.

She said: ‘The odds were against me, so they wanted treatment to start straight away.

‘[It] made me realise how lucky I am to be a young mum, especially now I most likely won’t be able to have any more.’

Neuroblastoma has one of the lowest survival rates of all childhood cancers, with only 67 per cent of patients surviving to five years.

As age increases, the chances of recovering decrease are lowered.

Currently, there are no standard recommendations for treatment of adult neuroblastoma, according to the NHS. 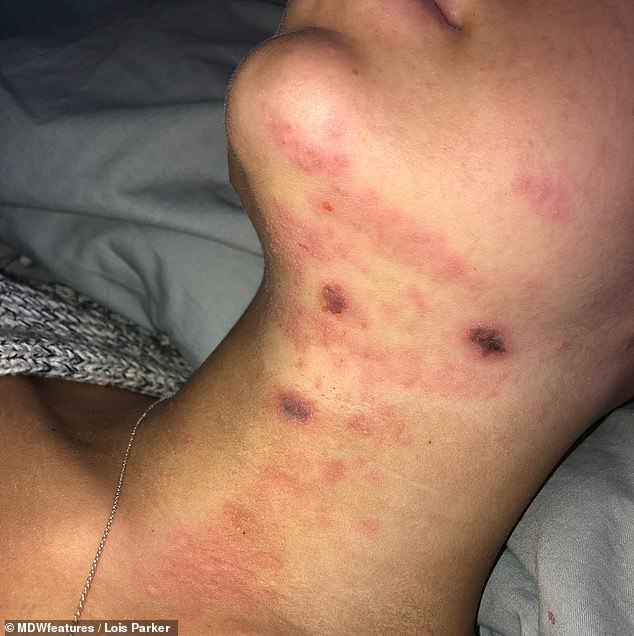 Treatment has caused numerous side effects, including ulcers on Ms Parker’s skin 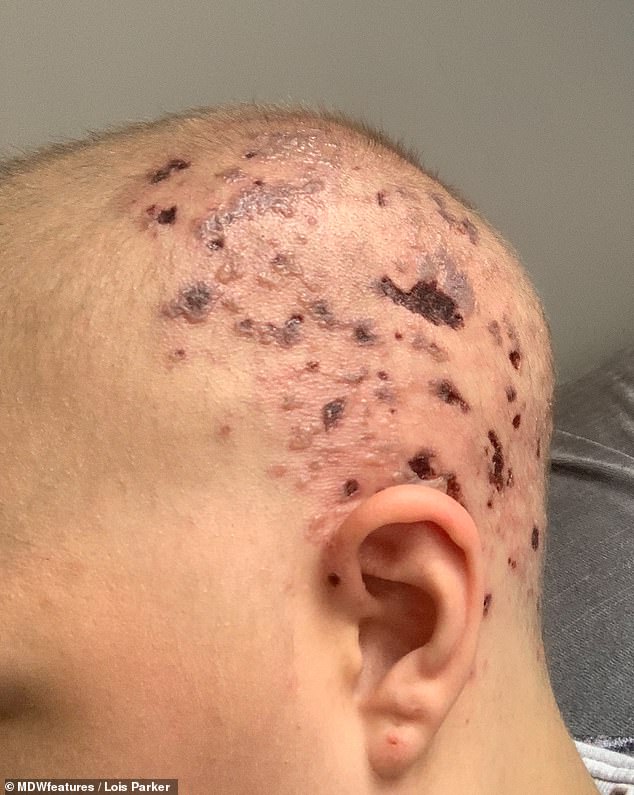 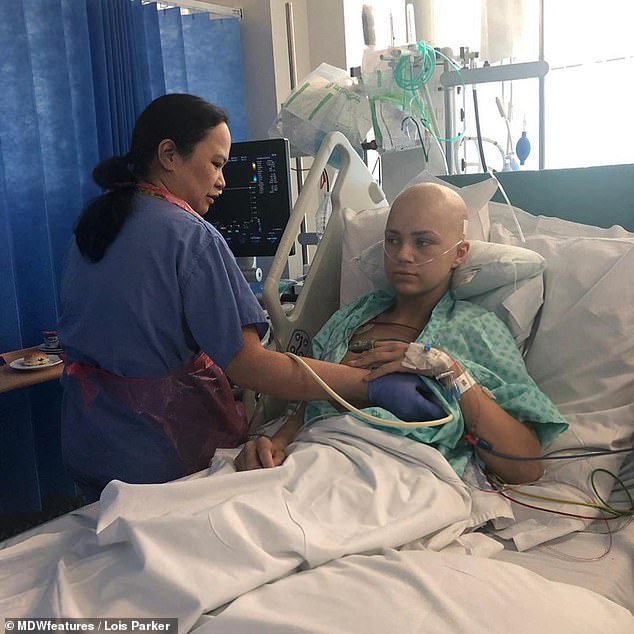 Ms Parker has endured chemotherapy, radiotherapy, a bone marrow transplant and immunotherapy. She is pictured in hospital

The lengthy treatment has caused numerous side effects, including ulcers, nausea, skin pain, dizziness, hair loss and rashes on her skin.

Ms Parker said: ‘As well as the usual chemotherapy symptoms, I suffered some serious complications too, including neutropenic sepsis, shingles, infections and cellulitis.

‘Once immunotherapy is done, hopefully I will be on top of this and I’ll go down to tablets.

‘If I take Lexi to the GP to get checked over for something, I get made out to be anxious or to feel guilty for wanting her to be seen which I genuinely believe is due to my diagnosis.

‘They think I’m just overthinking things because of what I’m going through.

‘I missed most of her birthday due to a hospital appointment, and I’ve missed a lot of her life since the diagnosis.’

Ms Parker also missed out on becoming a prison officer, having completed all the necessary tests just before her diagnosis.

She said: ‘Everything happens for a reason, sometimes awful things come our way. They bring light to the facts of life and purpose.

‘Your eyes are for sure opened when you get that diagnosis, but you have to use it to benefit someone.’