Mother, 28, has her double D breast implants removed because the silicone ‘was POISONING her and caused her weight loss, depression and rashes’

A mother-of-three paid to have her breast implants removed after five years because she became convinced they were poisoning her.

Mrs Ritschard said the implants made her look middle-aged and she shaved her head because her hair became brittle and dry.

She even claims breast implant illness – which is not officially recognised but is widely reported – caused heart palpitations and left her feeling suicidal.

Mrs Ritschard paid $5,000 (£3,850) – more than it cost her to put them in – to have the implants removed and says her symptoms all disappeared within eight weeks. 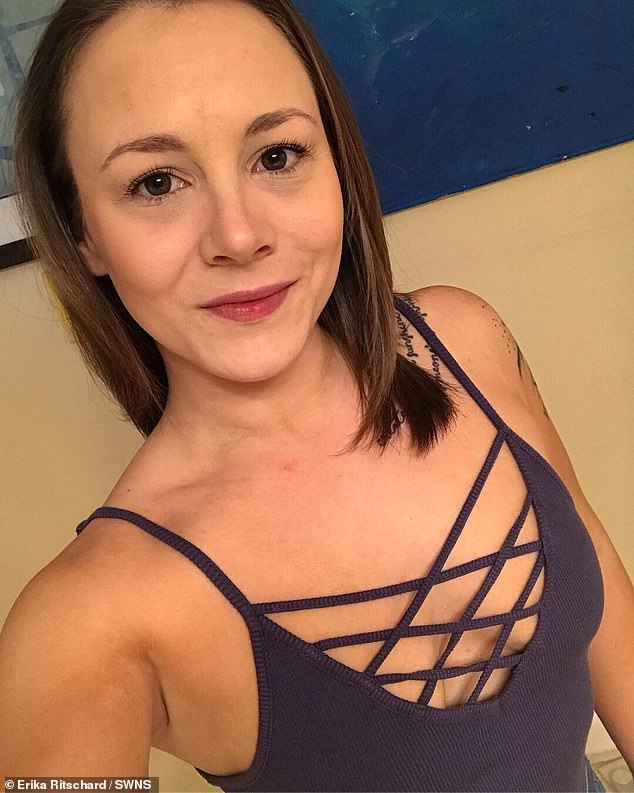 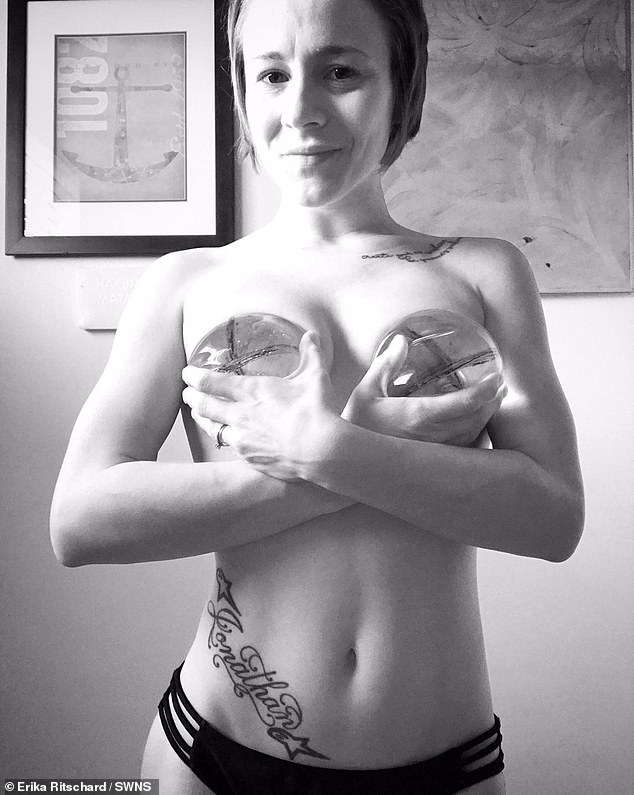 Mrs Ritschard, a mother of three children, took matters into her own hands after doctors kept telling her she wasn’t ill. She found support in a Facebook group for other women who had been through similar experiences after having implants

Mrs Ritschard said she was at her wit’s end after multiple doctors turned her away, saying she was the ‘healthiest sick person they’d ever seen’ when she asked for help.

But after stumbling across a Facebook group of women who had been through similar things, she decided her crippling symptoms were caused by her breasts.

And the photograph editor made the decision to have her silicone implants removed in February last year.

‘It’s horrifying to think that what I had chosen to put into my body was making it wither away,’ she said.

‘I wanted to cut them out of myself. During my worst times, I even contemplated suicide.’

Mrs Ritschard had decided to get implants in March 2012 after breastfeeding left her unhappy with her body, despite protests from her husband, Jonathan, 30, an electrician in the navy.

‘After breastfeeding two babies and losing some weight, I wasn’t really into the appearance of my breasts.

‘My husband told me I looked perfect but I was really set on getting implants. I felt like I had given my body to my kids and this was something just for me.

‘You had to be 22 to get silicone and I got them the day after my 22nd birthday.’

She paid $3,800 (£2,925) for the procedure and claims that almost immediately she felt depressed and inexplicably anxious.

‘Within three months, I was dealing with anxiety and depression,’ she said. And soon other symptoms developed.

Mrs Ritchard added: ‘All of a sudden my heart was racing for no reason. I got a kidney infection in the summer. After that, it was constant.

‘I had recurring yeast infections and respiratory problems. I went to ER several times with migraines.’ 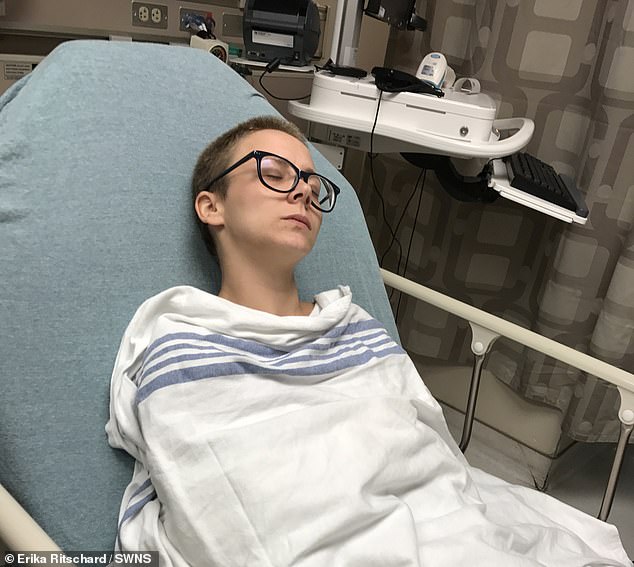 Mrs Ritschard even resorted to shaving her head because her hair became brittle and straw-like, which she claims was an effect of the implants 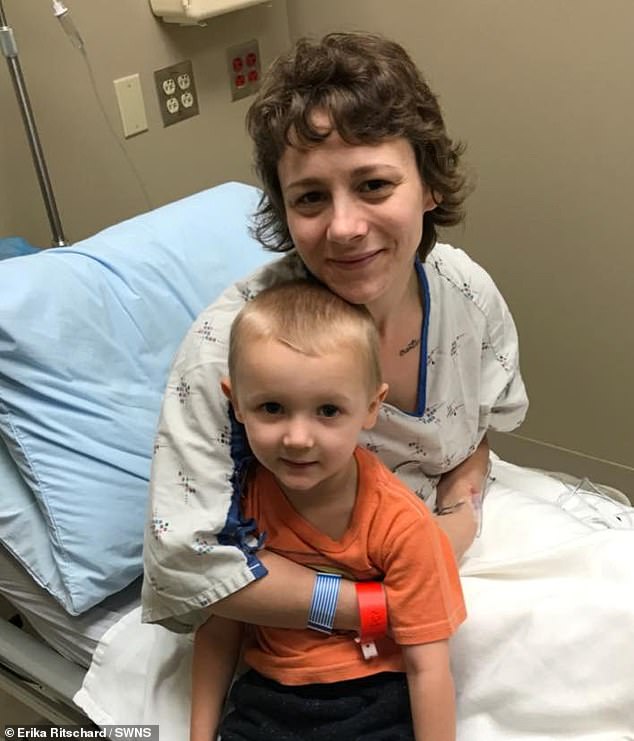 Mrs Ritschard, pictured in hospital with her youngest son, Eli, five, said the implants aged her prematurely and that people started to think she was in her 40s when she was really mid-20s

She said: ‘I lost 40 pounds in a year. I was so fatigued in my body, I wasn’t able to concentrate, I thought I had ADHD and my mood swings were outrageous.

‘My doctor sent me to a psychiatrist who said I had bipolar tendencies.

‘I would have extreme lows and manic highs. I had brain fog and insomnia. My muscles were in so much pain that I lived on a heating pad for months.

‘I would be extremely cold, sitting in my house in August with a coat, gloves and a beanie on. But then I’d have a hot flush and I would be dripping in sweat.

‘I developed dry patches of skin on my legs that made me look like I had alligator or snake skin. There were stabbing pains in my chest and ringing in my ears.’

Mrs Ritschard even resorted to shaving her head in the summer of 2017 when her hair suddenly became extremely brittle. 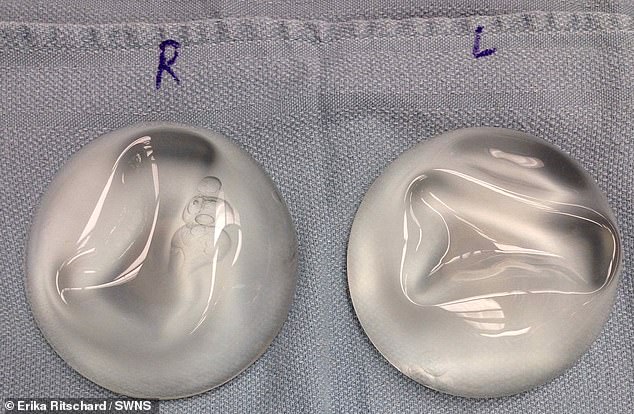 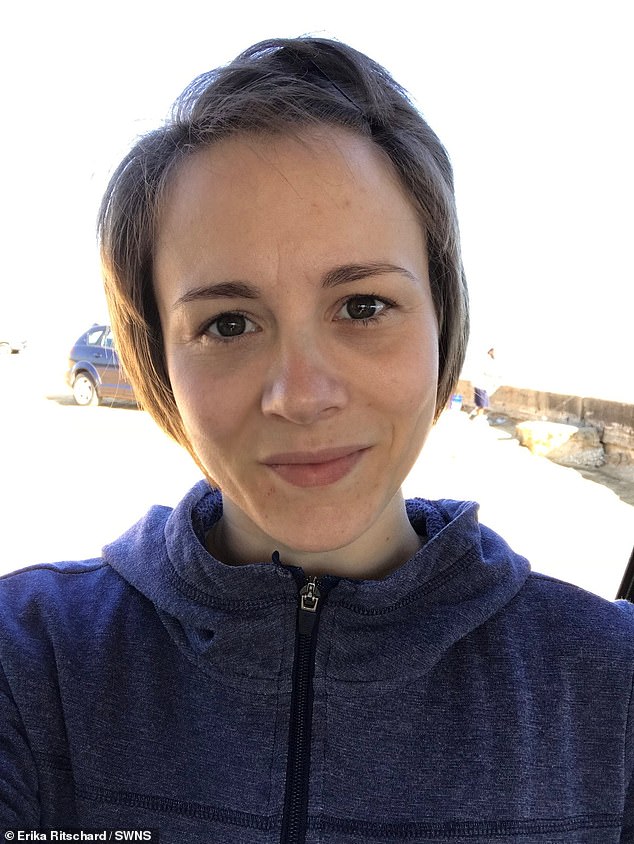 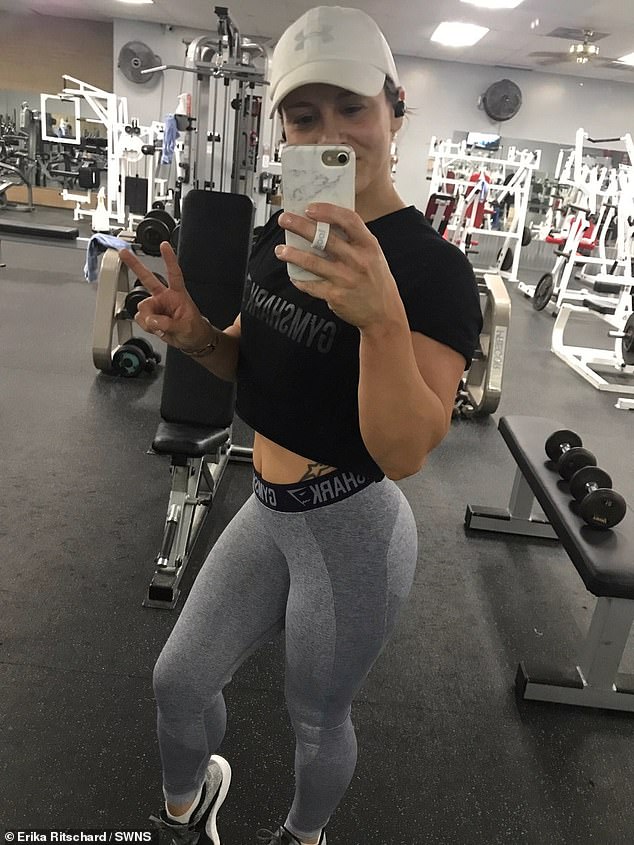 She now believes it was yet another medical problem linked to her implants.

Mrs Ritschard estimates she went to the doctor at least 15 times but she was never given a diagnosis.

She said: ‘The doctors kept saying it was stress and healthy anxiety. I remember an ER doctor said to me: “You’re the healthiest sick person we’ve ever seen”.

‘I felt like nobody believed me. Healthy people don’t drop 40lbs in a year and feel the way I felt.’

But in November 2017, by chance, Mrs Ritschard came across a Facebook group called Breast Implant Illness and Healing and felt like she finally had her diagnosis.

‘I became obsessed with getting new implants,’ she said. ‘I had had them almost six years and I wanted to get them done again.

Neither the NHS or the US Food and Drug Administration (FDA) acknowledge a single condition called breast implant illness.

They do, however, provide long lists of potential – and publicly known – side effects of having breast implants.

Implants are not designed to last a lifetime, the FDA says, and the longer a woman has the implants in her body the higher the risk of complications occurring.

Complications occur in around one per cent of all patients and can happen at any time after the surgery.

As well as changes to the appearance and feel of the breast some potential side effects include pain, infection, swelling or irritation, swollen lymph nodes, skin rashes or bruising.

The NHS urges any women suffering side effects to contact the clinic where they had the implants put in, and to report it through an official Yellow Card Scheme, to add to information on the safety of implants.

‘The description in the group fitted with exactly what I was experiencing. I went to the website and the Instagram and I found everything I needed.

‘I felt like I was reading about myself. I posted a bit of my story on the page and hundreds of women wrote to me and said it was definitely breast implant illness.’

Breast implant illness is not recognised by the US Food and Drug Administration (FDA) or the NHS, but has reportedly been suffered by many women.

More than 67,000 people are subscribed to a ‘Breast Implant Illness and Healing’ Facebook group.

Just three months after finding the group, in February 2018, Mrs Ritschard had her breast implants removed at a surgery in Mobile, Alabama.

She said: ‘I immediately felt myself again but at first I was worried it was the pain medication I was on after the operation.

‘But two weeks in, I knew this was a real heal. I was able to eat again. I was literally shovelling food into my mouth.

‘For so long any food made me feel nauseous but now I was eating double cheeseburgers and fries.

‘I put on 40 pounds in four months, all my muscle pain was gone, I could sleep through the night. My skin was soft again, no more alligator patches.

‘I literally had 20 years taken off my face after I explanted.

‘The illness made me rapidly age – people thought I was in my forties when I wasn’t even 30. All of my symptoms subsided in the first two months.’

Dr Diana Zuckerman, president of the National Center for Health Research in Washington DC, said breast implant illness not being recognised by the FDA does not mean it isn’t real. 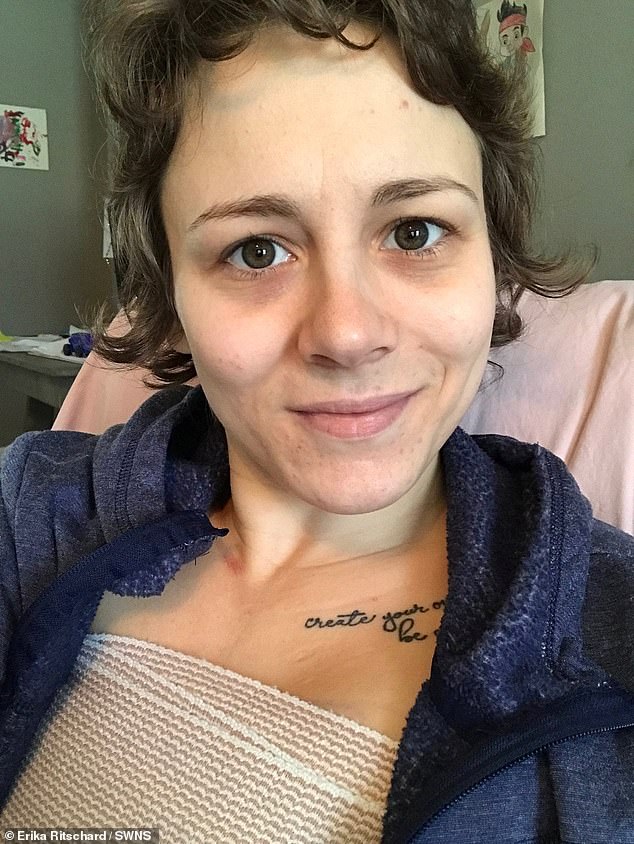 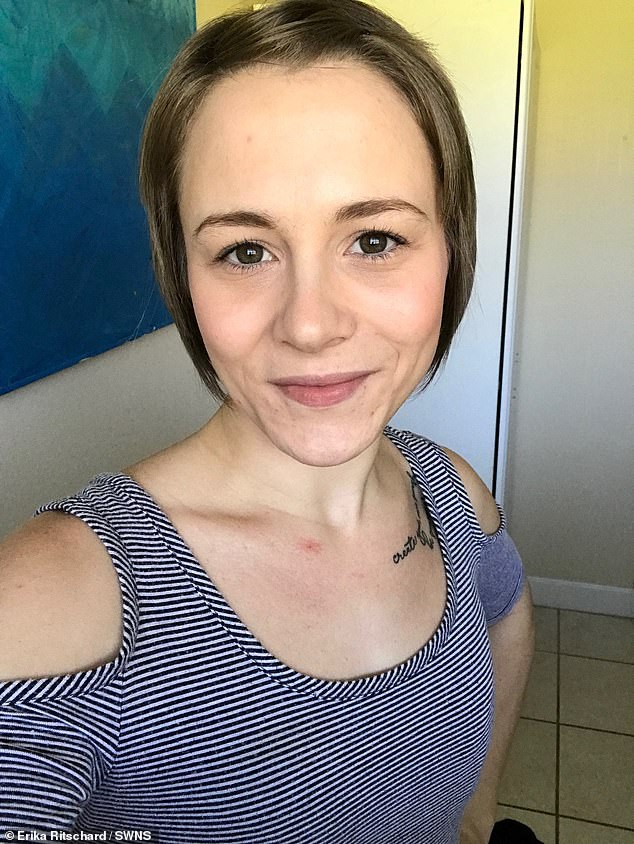 Mrs Ritschard (pictured after implant removal) had first wanted breast implants because she wasn’t happy with her body after birthing and breastfeeding three children, but recently said: ‘It’s horrifying to think that what I had chosen to put into my body was making it wither away’

‘When there’s a new pattern of a group of symptoms that seem to all cluster together for a group of people it often takes a long time until the medical community accepts that it is a real thing,’ Dr Zuckerman said.

‘We certainly have seen and talked to many women who have experienced this cluster of symptoms that are referred to as breast implant illness.

‘What they have in common is that they are symptoms that could be caused by their immune system going out of whack.

‘Many of the symptoms that these women talk about – joint pain, mental confusion, hair falling out – are very typical of certain autoimmune diseases.

‘It is possible that these conditions are caused by breast implants.’

She pointed out the link between breast implants and Anaplastic Large Cell Lymphoma, a rare cancer of the immune system.

Dr Zuckerman added: ‘It makes sense that if breast implants can cause ALCL, they can cause other problems in the immune system.’