Replace your rice and potatoes with lentils! Eating pulses reduces blood glucose levels by up to 35% and lowers the risk of type 2 diabetes, study reveals

Eating lentils instead of rice or potatoes could help prevent or manage type 2 diabetes, a study has found.

The vegetarian staple can reduce blood glucose levels by slowing down digestion and the release of sugars into the bloodstream.

Scientists at the University of Guelph in Canada discovered replacing half a serving of rice or potatoes with lentils caused blood sugar to fall by up to 35 per cent.

This could lead to dietary advice for people with type 2 diabetes or those at risk of the condition, in which high glucose levels are a key factor.

The food could be preventative too; consistently high blood sugar in healthy people can contribute to the insulin resistance which causes diabetes.

The researchers say lentils – which have in the past been found to lower blood pressure and reduce cholesterol – are nutrient rich and hope their findings will encourage more people to eat them. 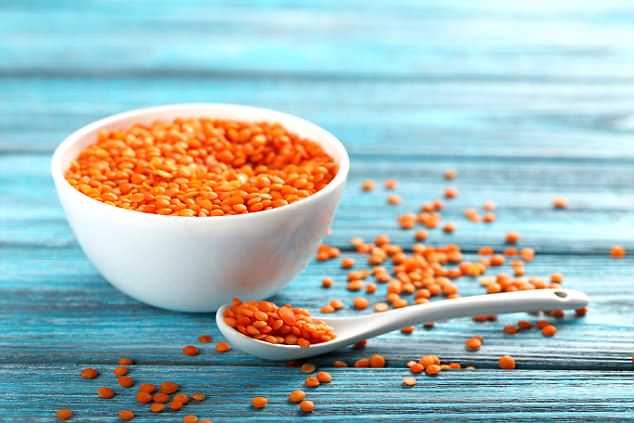 The Canadian scientists carried out a study on 24 healthy adults in which they were fed either white rice, white potatoes, or either of those mixed with red or green lentils.

Participants’ blood sugar levels were measured before they ate and then for two hours afterwards.

Those who ate half rice and half lentils had up to 20 per cent lower blood glucose than when they ate just rice.

Replacing half the potatoes with lentils led to a 35 per cent lower level than eating just potatoes.

In the past scientists have claimed lentils may also help to prevent high blood pressure and reduce cholesterol, and they are a good source of dietary fibre.

Pulses such as lentils are ‘extremely nutrient-dense’

High levels of glucose in the blood is the main effect of type 2 diabetes and can cause tiredness, blurred vision, thirst, and infections.

It happens because people with the condition develop a resistance to insulin, the hormone which enables to body to absorb glucose.

What is type 2 diabetes?

Type 2 diabetes is a condition which causes a person’s blood sugar to get too high.

Over 4 million people in the UK are thought to have some form of diabetes.

Type 2 diabetes is associated with being overweight and you may be more likely to get it if it’s in the family.

The condition means the body does not react properly to insulin – the hormone which controls absorption of sugar into the blood – and cannot properly regulate sugar glucose levels in the blood.

Excess fat in the liver increases the risk of developing type 2 diabetes as the buildup makes it harder to control glucose levels, and also makes the body more resistant to insulin.

Weight loss is the key to reducing liver fat and getting symptoms under control.

It can lead to more serious problems with nerves, vision and the heart.

Consistently high levels of blood sugar in a healthy person may lead to their body being less able to process sugars properly, and could contribute to this insulin resistance.

The researchers found lentils slowed down the digestive system which, combined with the fibre in them, prevents the body absorbing glucose.

‘High levels over a period of time can lead to mismanagement of blood glucose with is the hallmark of type 2 diabetes.

‘We are hoping this research will make people more aware of the health benefits of eating pulses.’

Lentils, a type of pulse, are a similar food to rice and potatoes so people could make the switch without drastically changing their meals, the researchers suggest.

‘We mixed the lentils in with the potatoes and because people don’t typically eat pulses on their own,’ Professor Duncan said.

‘They consume them in combination with other starches as part of a larger meal, so we wanted the results to reflect that.’

The team’s findings were published in the Journal of Nutrition.

Eating lentils could also combat high blood pressure, according to a study published in March.

The ‘amazing’ trial on rats revealed the pulse, commonly used in curries and soups, can slash blood pressure as it rises with age.

High blood pressure, medically known as hypertension, is a silent killer and can lead to strokes, heart attacks and heart failure.

The NHS reportedly spends around £2 billion each year on dishing out medications to combat dangerously high blood pressure.

But the University of Manitoba study offered hope of a cheap, easy and tasty way of combating the condition, and discovered lentils could reverse declines in blood vessel health, too.