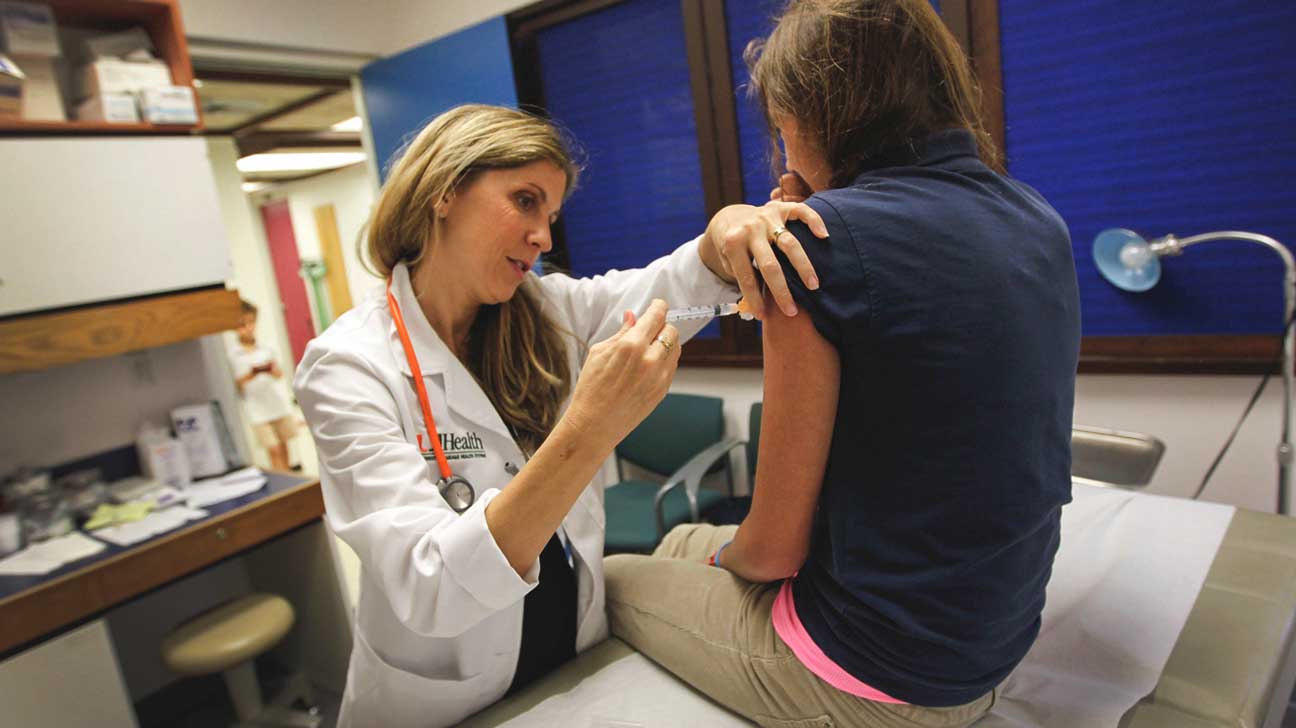 HPV vaccines successfully prevent women from developing the abnormal cells that can lead to cervical cancer.

In addition, the inoculation doesn’t cause serious side effects.

So, why don’t more teens get this vaccine that is effective against a virus that 4 out of 5 people will develop by the time they reach their mid-40s?

It’s a frustration for public health officials, especially after the release of a new summary that looked at more than two dozen studies involving the effectiveness of the HPV vaccine.

The research was done by Cochrane, a nonprofit that distributes international health research.

HPV, or the human papillomavirus, is the most common sexually transmitted infection in the world.

In fact, 80 percent of men and women will have HPV before age 45, according to a 2014 study in the journal Sexually Transmitted Diseases.

The virus spreads through skin-to-skin contact and does not show visible symptoms in the infected. It does not have a treatment or cure once it develops.

Most HPV infections are harmless and many people who have it don’t even know they’re infected.

But in some people, the virus can develop into cancer. In particular, the strains HPV 16 and HPV 18 are known to cause 70 percent of cervical cancers and precancerous cervical lesions in women, according to the World Health Organization (WHO).

Therefore, the U.S. Centers for Disease Control and Prevention (CDC) recommends that 11-year-olds and 12-year-olds get two doses of an HPV vaccine.

Currently, the HPV vaccines approved by the Food and Drug Administration (FDA) are Gardasil, Gardasil 9, and Cervarix.

What the HPV study revealed

The team from Cochrane, led by Dr. Marc Arbyn, coordinator of the Unit of Cancer Epidemiology at the Sciensano Institute in Belgium, examined the findings of 26 studies of the HPV vaccine.

This research spanned 8 years and comprised more than 73,000 women living on all continents.

The studies were randomized, with some women having the HPV vaccine and others having a placebo.

“The newer vaccine that targets nine HPV types was not included in the review since it has not been compared against a placebo in a randomized controlled trial,” the Cochrane researchers stated.

The studies primarily focused on women younger than 26, although three studies included women up to age 45.

Researchers studying HPV vaccines zero in on the growth of abnormal cervical cells (called “precancer”) because cancer itself can take years to develop.

Therefore, these studies focused on the HPV vaccines’ success at preventing the development of precancer.

“None of the studies have followed up participants for long enough to detect an effect on cervical cancer,” Cochrane researchers noted.

The researchers concluded that studies show HPV vaccines do prevent the development of abnormal cells on the cervix.

The researchers also looked at data from all enrolled women regardless of whether they were free of high-risk HPV at vaccination or not.

HPV vaccination also reduced the risk for any precancer lesions from 559 to 391 per 10,000, according to the summary report.

“The evidence shows that HPV vaccination is very effective at reducing HPV 16/18 infections and that it significantly reduces the risk of developing high grade CIN [development of abnormal cells] caused by HPV 16/18 or any high grade CIN,” wrote Dr. Jo Morrison, a consultant gynecological oncologist at the Somerset Gynecological Cancer Center in the United Kingdom and a coordinating editor for Cochrane’s gynecological, neuro-oncology and orphan cancer review group, in an email to Healthline.

“Although we don’t yet have data about cervical cancer rates (because it takes many years to develop after an infection), based on the evidence available to date, it is very likely that the rate will be reduced, since we have a good understanding of the natural history of CIN and cervical cancer,” she continued.

‘Almost everyone is exposed to HPV’

There are more than 100 strains of HPV and 40 of those strains can spread through sexual contact, affecting the penis, vagina, or rectum, as well as the mouth and the throat, according to Planned Parenthood.

“Almost everyone is exposed to HPV when they become sexually active,” Morrison said. “Most women clear the infection with a natural immune response and have no ongoing issues.”

However, some strains of sexually-transmitted HPV can cause warts around the genitals or anus. Other strains can cause abnormalities on the cervix, which, left untreated, can lead to cervical cancer,

In the United States, cervical cancer is expected to kill 4,170 women this year, according to the American Cancer Society.

That makes it a relatively rare cancer (compared to breast cancer and lung cancer, the two most common cancers) for U.S. women, according to the National Institutes of Health’s National Cancer Institute.

In the developing world, however, cervical cancer is the second most common cancer.

Arbyn noted in an email to Healthline that “approximately 85 percent of cervical cancer [deaths] occur in less developed countries.”

Common side effects of HPV vaccines are considered minimal.

They include tiredness, joint or muscle pain, nausea, or pain or redness at the injection site.

The Cochrane report found that the HPV vaccines “[do] not appear to increase the risk of serious side effects.”

For both vaccinated and unvaccinated women, the increase in serious side effects was about 7 percent.

The report also found that studies did not show an increased risk of miscarriage in women who became pregnant after getting the vaccine.

‘An important measure parents can take’

In 2016, the CDC began recommending that 11-year-olds and 12- year-olds get vaccinated and that two doses of the vaccine be given before age 15.

Three doses of the vaccine are recommended for those between ages 15 and 26.

However, many young people who could be vaccinated are not getting the inoculations.

A CDC analysis of 2015 data of 13-year-olds to 17-year-olds found that 63 percent of girls and only 50 percent of boys had received at least one dose of the HPV vaccine.

Some parents are concerned that vaccinating their children against HPV will encourage their kids to engage in riskier sexual behavior, although experts say numerous studies have proven this not to be the case.

For example, a 2012 study in the journal Pediatrics examined 1,398 girls, ages 11 and 12. Three years later, researchers found that having the HPV vaccine was not associated with an increase in sexual activity.

Additionally, a 2015 study found that getting the HPV vaccine does not lead to girls having a higher exposure to STIs.

The study, published in JAMA Internal Medicine, looked at health insurance records for 21,610 girls ages 10 to 18 who received the HPV vaccine as well as 186,501 of girls of the same ages and in the same zip codes who were not vaccinated.

“Fears that the HPV vaccine will encourage sexual activity are simply unfounded,” said Nicole Cushman, MPH, executive director of Answer, a national organization based out of Rutgers University that provides sexuality education resources for young adults. “Parents want to keep their children safe and healthy, and getting the HPV vaccine — for both daughters and sons — is an important measure parents can take to protect their kids’ future health.”

In fact, age is especially important when it comes to this vaccine.

“The most effective target population for the vaccine is young adolescents before they are exposed to HPV, which is why most countries offer it aged around 9 to 13 years [old],” Morrison said.

Australia has been providing the HPV vaccine free to 12-year-old and 13-year-old girls since 2007. Boys have received it as well since 2013.

Earlier this year, a bill was introduced in Florida’s state legislature to require HPV vaccination before children can attend public school.

Pap smears throughout adulthood are another important screening tool in the prevention of cervical cancer. The American Cancer Society notes that most women will be diagnosed with cervical cancer between the ages of 35 and 44.

Even women who have received the HPV vaccines should have Pap smears, according to the American Cancer Society.