When Michael McGrath, MD, medical director of the Ohana Luxury Alcohol Rehab on the Big Island of Hawaii, trains primary care physicians, he tells them that talking with patients about substance use disorders is like having a stressful, weird conversation. But it’s a courageous one because of the stigma associated with drug and alcohol disorders. 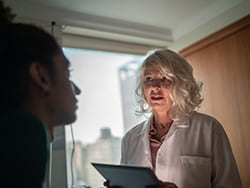 McGrath starts the conversation with patients by expressing that physicians now understand that addiction is a disease ― one for which the patient isn’t responsible. He explains that there’s both a genetic and a nature/nurture component of the disorder and assures them that he won’t judge or abandon them but rather help them find treatment and make sure they get on the path to wellness.

According to the Recovery Research Institute, a leading nonprofit orgnaization from Massachusetts General Hospital dedicated to advancing addiction treatment and recovery, about 20 million people in the US suffer from a substance use disorder. More than half (54%) need assistance with their recovery. The National Institute on Drug Abuse reports that substance abuse and addiction cost society more than $740 billion annually in workplace productivity, healthcare, and crime-related expenses.

Despite the challenges, physician experts provide advice on how to treat and help patients who have substance use disorders more effectively.

Often, the primary care physician or emergency physician is the first to be aware of a patient’s problem with a substance or a relapse. In many communities where shortages of specialized physicians and nonphysician treatment options for substance use disorders aren’t available, there’s usually limited time and resources to help patients with these disorders.

Patients often sense doctors are rushed and may not be interested in hearing about their drug or alcohol problems. Reddit threads are filled with stories like that of user “Cyralek,” who say that the two doctors they’ve seen since quitting drinking didn’t show much interest in the problem beyond ordering liver function tests.

In a nationwide study by researchers at Washington University School of Medicine in St. Louis, 80% of patients who met the diagnostic criteria for substance use disorder visited a doctor, hospital, or clinic for some reason over the past year. Only 1 in 10 were encouraged to cut back on drinking or receive any form of treatment or referral for substance misuse.

Emma Gordon, founder of a salvage yard in Los Angeles, says she used to abuse alcohol and that it affected every aspect of her life. Her brother tried to intervene, but nothing worked until she finally told a physician. “I admitted my problem and felt incredibly calm when she reacted as though it was all normal. I believe that was my first step to becoming a better me. I was thankful I had gone to see a doctor,” says Gordon.

Though physicians in primary care may not have more than a 15-minute appointment slot, seizing the opportunity to initiate a substance use disorder conversation when warranted is crucial, says McGrath. The CAGE-AID screening tool, which includes questions such as, “Have you ever felt you ought to cut down on your drinking or drug use?,” is an excellent starter. McGrath also advises primary care clinicians to lower the threshold of concern to a single positive answer rather than several.

Doctors aren’t necessarily rewarded for the time it takes to develop a rapport with patients and to have a conversation that leads to asking, How much are you drinking? “The system in primary care isn’t set up that way,” said Lucy McBride, MD, an internist in Washington, DC.

In a perfect world, patients struggling with a substance use disorder would present with a request to discontinue using drugs or alcohol, as Gordon did. While that does happen sometimes, the onus is on the physician to screen for substance misuse.

“Remember, this is the disease that tells you that you don’t have a disease,” McGrath says. He also says that the use of screening instruments is a bare minimum. When patients are in the throes of a substance use disorder, the prefrontal cortex doesn’t work effectively. McGrath says there’s an alteration of consciousness so that the patient doesn’t realize the extent of the disease. “Often simply asking the patient is falling far short. It’s the biggest mistake I see,” he says.

Self-reporting from the patient may be unreliable. “That would be like a patient coming in and saying, ‘My blood sugar is 700, and I want you to give me some insulin,’ ” McGrath says. Instead, clinicians in the field need a more objective measurement.

Perhaps that means asking the patient to bring in a significant other at the next visit or digging deeper into the conversation about alcohol and drugs and their role in the patient’s life. And to really have an impact, McGrath said, the clinician should talk to the patient about referral for further evaluation.

“You have to get collateral history; that’s the goldmine for the clinician,” McGrath says. “It may take a few more minutes or mean talking to a family member, but it can make the difference between life and death.”

“I am thankful to my doctor who discussed this [substance use disorder] with me in detail,” says Ronald Williams, another Angeleno who braved the difficult discussion with his doctor. Williams says his doctor explained it in a good way and that if the doctor hadn’t guided him empathetically, the conversation might not have gone as well.

“We check patients’ cholesterol. We get them on the scale. But there is no blood test to discover how much they’re drinking, no PCR to test for social anxiety, no MRI that distinguishes between their recreational marijuana use and marijuana abuse,” said McBride.

Another thing McGrath recommends is for primary care physicians to check the prescription drug monitoring program (PDMP) database in their state to help be alerted to a patient with a substance use disorder. The CDC’s PMPD guidelines recommend that the clinician check on a patient every 3 months or each time they write an opioid prescription. Assigning a staff member or a nurse to check the database can help uncover a history of doctor-shopping or use controlled substances.

“There’s been a lot of times I’ve gone on self-report, and I’ve been bamboozled because I don’t have a truth-o-meter and I can’t tell when a patient is telling the truth,” says McGrath.

He is also a huge proponent of point-of-service screening. Patients can urinate in a cup that has amino assay strips on the side, like an immediate COVID-19 test, or they can spit into a saliva cup. “It’s really beneficial for the patient and the clinician to know right then at the point of service if there is a substance present, and what it is,” McGrath said.

It can be part of the larger conversation once a problem with substances has been uncovered. The clinician can say something like, “Let’s see where you are right now today as far as what you have in your system, and where we should go from here.”

In the largest study on how primary care physicians address substance use disorders, fewer than 20% described themselves as very prepared to identify alcoholism or illegal drug use. Since most patients prefer to seek treatment from their primary care doctor, at least initially, not being prepared is a problem.

Although referral for specialty addiction treatment is recommended for patients with severe substance use disorders, primary care physicians with appropriate experience, training, and support can provide some of these services. “In an ideal world I wouldn’t have to refer patients out, since they’re much more likely to talk with their primary care provider about sensitive, intimate topics,” says McBride.

The Issue of Reimbursement

Billing for substance use disorder counseling or coordination of care is still challenging, and how to get compensated remains a conundrum for many physicians. Reimbursement may not adequately compensate providers for the additional time and staff needed, but some changes have been positive.

For instance, the American Society for Addiction Medicine reports that in 2022, Medicare expanded the physician fee schedule for opioid and SUD counseling to include reimbursement for telemedicine services.

Learning the billing CPT codes for various addiction treatments and counseling, or having a billing service that understands them, is crucial to reimbursement and keeping revenue running smoothly.

At the very least, developing relationships with treatment centers and specialists in the community can help physicians with referrals and with determining the level of care needed. Physicians can help facilitate that care with routine reassessment and frequent follow-ups, as well as by requesting reports from the treatment facility, continuing treatment of medical conditions, and reinforcing the importance of continued substance use disorder treatment.

McBride says that primary care physicians can and should make their office a safe, blame-free medical home for patients with substance use disorders. “Patients also need to understand they should bring their whole selves to the doctor — to talk about their sleep, what they consume, their depression, and not just about alcohol, but their relationship with it, and other substances,” she says.

“There needs to be time to talk about it.”