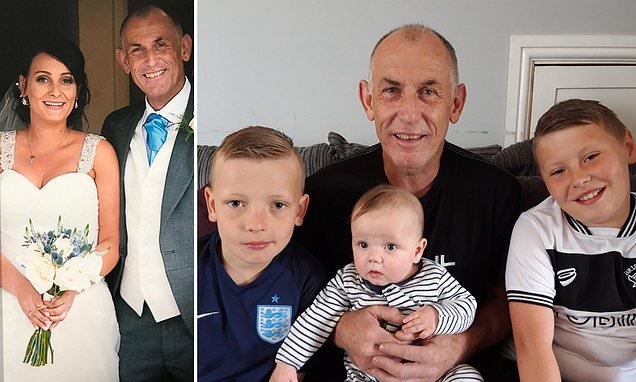 How not being able to flush my stools was a sign of CANCER: Roofer reveals quick-thinking GP noticed his bizarre complaint may be an early symptom of the deadliest form of the disease

A grandfather has told how him being unable to flush his faeces down the toilet led doctors to spot his pancreatic cancer.

Chris Davey, 59, of Bristol, wasn’t too concerned about his floating stools – but made note of it to tell his GP at his next check-up.

The roofer also suffered with itchy hands and feet and yellowing round the eyes, which he also decided to flag to his doctor in April 2016.

His quick-thinking GP immediately recognised the symptoms as being a sign of pancreatic cancer – one of the deadliest forms.

Mr Davey was diagnosed with the disease two weeks later.

He needed an eight-hour operation to ‘re-plumb’ his insides to rid him of the cancer, before months of chemotherapy to keep it at bay.

Mr Davey only survived his diagnosis because it was spotted so early – allowing him to receive surgery, the only way of ‘curing’ the disease. 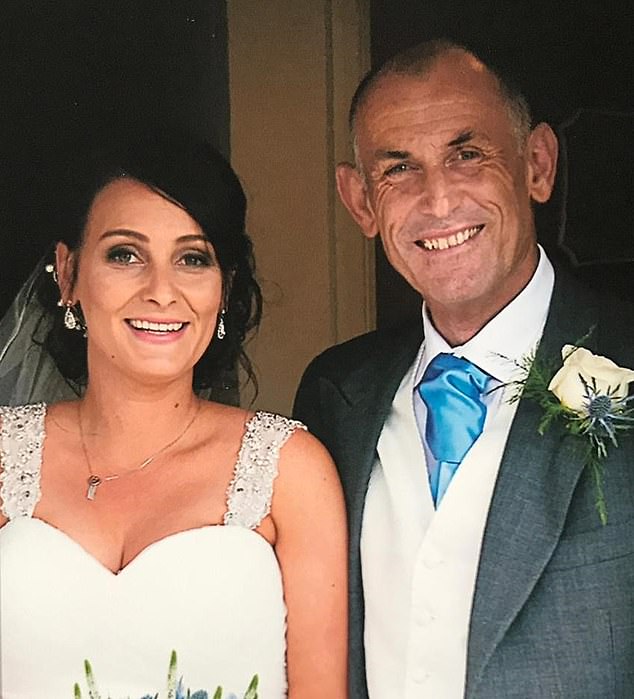 Chris Davey, 59, of Bristol, was diagnosed with pancreatic cancer in April 2016 when his stools wouldn’t flush and his hands and feet were ‘off the scale’ itchy. It was just three months before the wedding of his daughter, Lisa Ball, 34 (pictured) 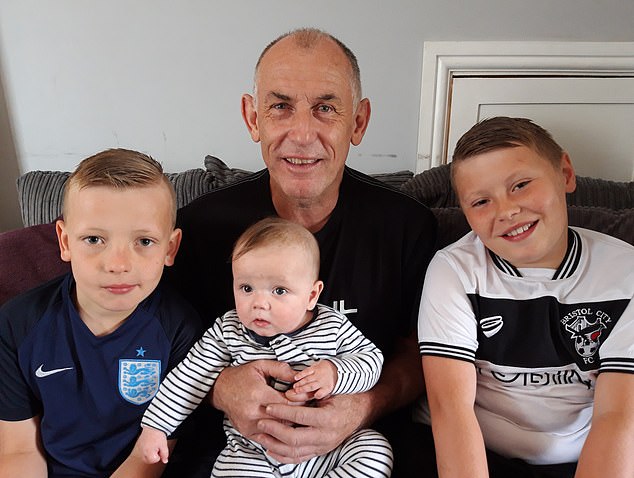 Mr Davey, pictured this year, refers to himself as a ‘lucky man’, having met a ‘surprise’ grandchild two years after his life-saving surgery. He said: ‘If things had gone differently, I would have missed out on so much including meeting my 6th grandchild, Regan’ (pictured middle. Left, Riley, eight, and right, Freddie, 10)

He told MailOnline: ‘I class myself as a really lucky man. I’d always been a fit chap. I’d never smoked or drank a lot and was into my sport. It was all quite a shock.

‘It started with terribly itchy feet and hands. You wouldn’t believe it. It was off the scale and like torture.

‘My stools had changed completely. They weren’t flushing and there was an unusual smell. Not necessarily bad, just different.

Pancreatic cancer can cause oily stool that floats, which is known as steatorrhoea.

Stool may be large, pale, smell horrible and can be difficult to flush down the toilet.

But if a tumor blocks the pancreatic duct, stool may float due to the higher fat content, appear bulky, greasy, and unusually pale.

It can also lead to other digestions problems such as diarrhoea and vomiting.

Changes in stool can also be a sign of jaundice, which has symptoms of yellowing skin and eyes and itchy skin.

Jaundice is caused by the buildup of bilirubin, a dark yellow-brown substance made in the liver.

Bile goes through the common bile duct, through the pancreas and into the intestines where it helps break down fats. It eventually leaves the body in the stool.

When the common bile duct becomes blocked, bile can’t reach the intestines, and the amount of bilirubin in the body builds up.

As bilirubin levels in the blood increase, the urine becomes brown in color, stools become lighter in colour and the stools become oilier.

‘I just generally felt a bit unwell and sluggish. I was still working really hard and carrying a lot of weight around.

‘I went to the GP with a list of symptoms. I found it quite funny really, that all these odd things were happening to me.’

Light coloured floating stools are also a sign of jaundice, which was the cause for Mr Davey’s itchy skin and yellowing eyes.

Jaundice is when bilirubin, a component of bile made in the liver, builds up in the blood.

Bile travels through the bile duct into the pancreas, but if the bile duct is blocked, fats are unable to be broken down in the body because enzymes that digest fatty substances aren’t released.

Therefore stools can become greasy and can float in the toilet – meaning they are harder to flush, according to Pancreatic Cancer UK.

Pancreatic cancer strikes 9,100 people in UK and 56,770 in the US each year, according to estimates.

A quarter of patients with the disease die within a month of being diagnosed, and three quarters will die within a year.

Three years after his treatment ended, Mr Davey is raising awareness of the lethal disease – for which there is no screening test for.

Recalling his check-up with his GP, he said: ‘She said, “It’s really good you have written this down. But I don’t like the look of it”.’

After some further medical tests, including an MRI scan, Mr Davey – who has six grand-children – received the results.

He said: ‘My GP phoned me, while I was still at work, and she said I had a tumour. It’s all a bit of a blur. It was a shock to the family. Rachael, my wife, was devastated.’ 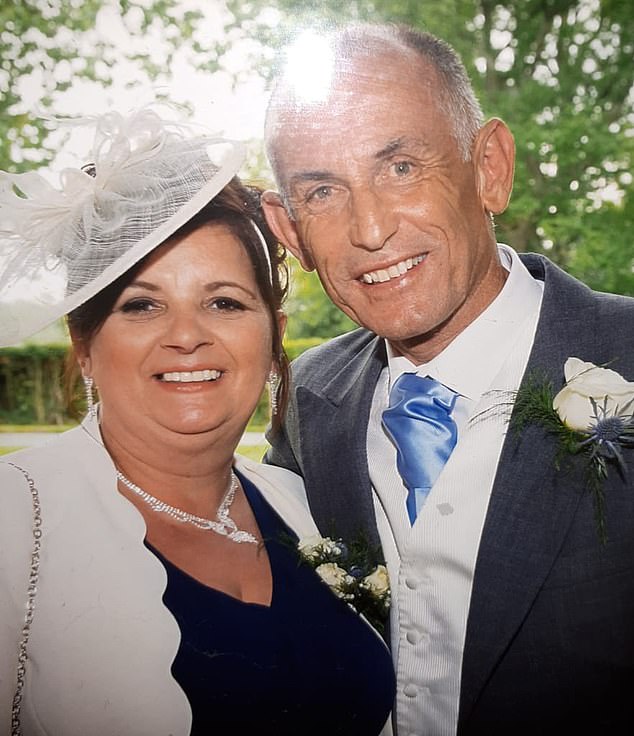 Four days after Mr Davey’s daughters wedding, he had life-saving surgery to remove the tumour. Pictured with his wife, Rachael, at the wedding in 2016 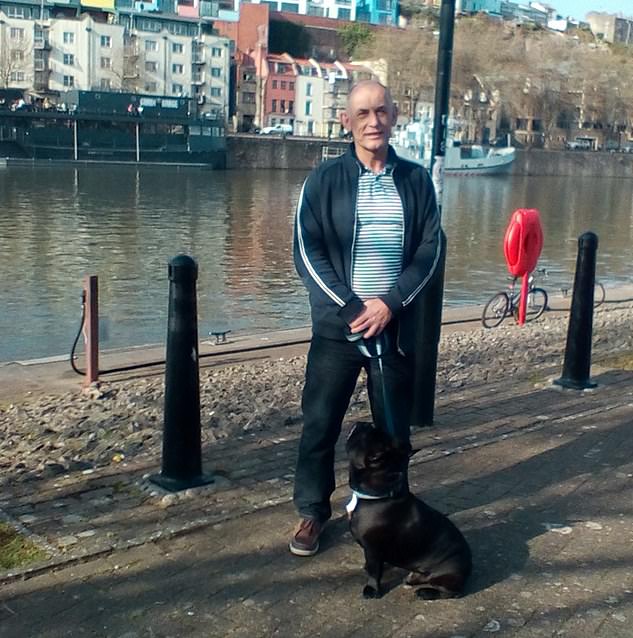 Mr Davey, pictured in his hometown of Bristol, said: ‘One of the nurses said to me, “You don’t realise how lucky you are, my friend.” That really stuck in my head, especially when I found out how bad the statistics were for pancreatic cancer’

Mr Davey said that, after being told the disease had been spotted early, a nurse told him: ‘You don’t realise how lucky you are, my friend’.

‘That really stuck in my head, especially when I found out how bad the statistics were for pancreatic cancer,’ he added.

Surgery is the only possible cure for pancreatic cancer but less than ten per cent of patients are able to have the operation.

This is because by the time they have been diagnosed, it is too late and their cancer has spread.

Just four days before he was due to have the surgery, on June 1 2016, Mr Davey was able to attend the wedding of his daughter, Lisa Ball, 34.

‘I tanned in the garden so I wouldn’t look sick. And it worked. People were shocked because they knew about the diagnosis.’

The Whipple operation removes the tumour and the head of the pancreas to prevent the cancer spreading to other organs.

Because of the way blood vessels are shared, surgeons must also remove part of the bile duct, gallbladder, small intestine and stomach before reconnecting what is left to allow normal digestion of food and bodily functions. 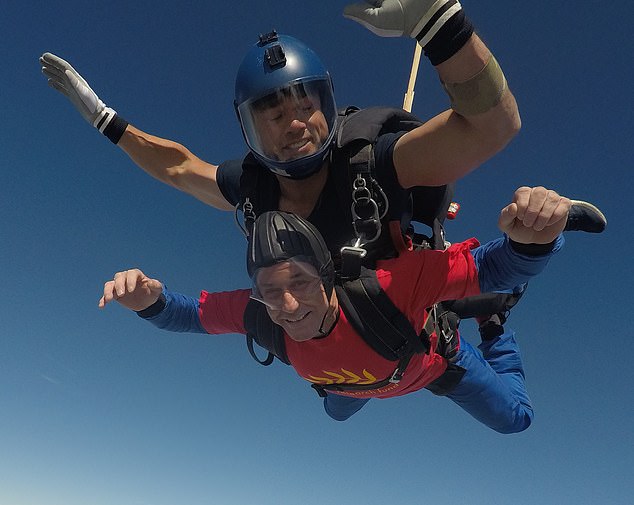 Mr Davey was determined to keep positive – despite only ever reading things online that made him scared. He now fundraisers for charities. Pictured, doing a charity skydive

WHAT IS THE WHIPPLE SURGERY?

The Whipple procedure, or pancreaticoduodenectomy, is the most common surgery to remove tumors in the pancreas.

Surgery to remove a tumor offers the best chance for long-term control of all pancreatic cancer types.

The Whipple removes and reconstructs a large part of the gastrointestinal tract and is a difficult and complex operation taking five to seven hours.

If a tumor is in the head of the pancreas, has not spread to other areas of the body and can be removed surgically, the Whipple procedure may be attempted.

The patient stays in the hospital for eight to ten days after a Whipple procedure. During this time, doctors watch for complications, and the patient slowly begins drinking and eating again.

In the days following surgery, doctors run extensive tests to see if all the cancer was removed and if any cancer cells were in the lymph nodes.

Mr Davey had prepared for surgery by stepping up his training regime, doing 100 press-ups a day because his doctors told him to stay active.

Consequently, the day after his surgery, in intensive care, a physio who came to see Mr Davey, was shocked at his ability to stand up and walk on the spot with ease.

Mr Davey, who spent another week in hospital recovering, said: ‘Doctors said, “I’ve never seen anything like it from a Whipple surgery”.’

When Mr Davey was allowed to go home the first thing he did was buy a Fitbit to continue building his strength, and ten weeks later, he was back at work.

He said: ‘I worked on my fitness one step at a time, making sure I took my doctor’s advice of listening to my body and taking it slow.

‘After the surgery I went through 18 rounds of chemotherapy. Each time I went I counted down how many I had left because you can only do them one at a time.

‘You need to get through each step as it comes, that’s the only way I managed to deal with it.’

Mr Davey was determined to keep positive – despite only ever reading things online that made him scared.

He said: ‘We’d never really heard about pancreatic cancer. The more information we got, it became darker and darker and it depressed me.

‘The worst thing is the oncology department in hospital where you see other people upset.

‘I’ve seen women crying about losing their hair, and children is the worst, it really tugs on your heart strings. I wanted my story to be positive and upbeat.’

Mr Davey, who is monitored regularly for signs of his cancer returning, refers to himself as a ‘lucky man’, having met a ‘surprise’ grandchild.

He said: ‘If things had gone differently, I would have missed out on so much including meeting my sixth grandchild, Regan.’

‘Thousands of people every year are given the devastating news that their pancreatic cancer has been caught too late for them to have surgery, the only potential cure.

‘We urgently need to equip doctors with a simple test but it’s an enormous challenge.’

Pancreatic Cancer UK are launching the new campaign ‘Unite-Diagnose-Save-Lives’ to help fund the first-ever simple test for pancreatic cancer by 2024, for which you can pledge your support here.

PANCREATIC CANCER: WHAT ARE THE SYMPTOMS AND STATISTICS?

Pancreatic cancer often doesn’t cause any signs or symptoms in the early stages. This can make it hard to diagnose early. As the cancer grows, it may start to cause symptoms. The symptoms and how bad they are can vary for each person.

Around 10,000 people are diagnosed with pancreatic cancer per year in the UK – 27 people every day.

Some evidence has suggested that alcohol, red and processed meat, blood group and gallstones or gall bladder surgery may also increase your risk.