With season two of The Kardashians just gearing up, the family-turned-empire’s powerful marketing engine is posting at full speed on social media in an attempt to remind us of the glitz, glamour and scandal our favourite famous sisters are known for.

One such post depicted eldest sister, Kourtney Kardashian, trying to encourage Kim, Khloé and mum Kris to do a yoni (or vaginal) steam during a scene from the previous season. “It’s so good for your vagina,” Kourtney says. “You put like roses and stuff, and you’re like steaming your vagina with roses, like what is more luxurious?”

Despite Khloé’s apparent hesitation, the damage was done. The Kardashian’s influence is vast and mighty enough to ensure that even a fleeting, casual conversation could inspire the masses.

It has been widely reported that vaginal steaming is a questionable practice, with various gynaecologists emphasising the organ is self-cleaning. Ultimately, anything that could burn, scald, or alter the natural pH of your reproductive organs should be avoided.

Yet, one of the most famous influencers of our time is touting its benefits to her 197 million Instagram followers and countless others watching the reality show.

Over time, it has become difficult to “keep up” with the plethora of questionable health and beauty products the family has endorsed. But, whether sucked into the hype yourself or merely looking on with scepticism, some were burned into our collective psyche.

Both Khloé and Kim have been known to promote products from Flat Tummy Co, a company that creates teas, shakes, lollipops, and gummies said to both speed up metabolism and reduce bloating and cravings.

“Fuelling up with my @flattummyco meal replacement shake before getting my workout done today,” Kim wrote on Instagram. “You guys need to do yourselves a favour and get on these Shakes because I’ve been seeing some seriously good results.”

The Good Place star Jameela Jamil has been outwardly vocal about her opposition to the family’s association with dieting supplements, arguing that it reinforces unhealthy eating habits and negative body-image.

Responding to one of Khloé’s sponsored posts, the actress noted that the products weren’t approved by the American Food and Drug Administration at the time of the post, and warned of possible side effects such as cramping, diarrhoea, and dehydration.

“It’s incredibly awful that the industry bullied you until you became this fixated on your appearance,” Jamil wrote on Instagram. “That’s the media’s fault. But now please don’t put that back into the world, and hurt other girls, the way you have been hurt.”

The Kardashians are known to regularly use personal trainers and nutritionists, details they tend to omit when promoting weight loss products, therefore failing to highlight the importance of a balanced meal and ample exercise alongside the use of any supplement.

Despite repeated criticism and limited science behind the various products’ health benefits, the women continue to endorse these teas, which are more akin to a laxative than a comforting evening drink.

Kim brought the hourglass figure back into vogue in a major way. A tiny waist accompanied by pert, round buttocks fast became the epitome of feminine beauty, something to be attained at all costs.

Unless naturally blessed with curves, it’s not the easiest shape to achieve… unless you literally force your body into it, which Kim made possible when she released her Skims waist trainer in 2019. 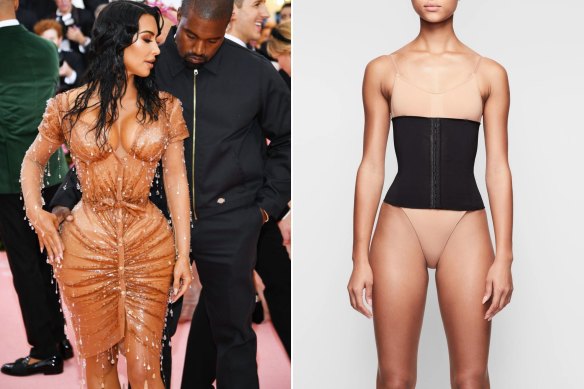 To see the effects of a waist trainer, you need to wear it for an extended period of time – usually eight hours or more each day. What the Kardashians neglect to mention are the potential side effects of wearing what is essentially an old-school girdle for hours on end.

When cinched to the gods, you tend to inhale less oxygen. This, in turn, could result in dizziness or even fainting. Waist trainers can weaken your abdominal muscles, which are used less when strapped in, and can eventually lead to back pain and poor posture. Nerve damage, heartburn, and even organ damage from over-compression of the kidney, liver, and bladder are all risks you could be taking when slipping into your Kardashian-approved corset.

Taking it one step further, Kim released her maternity shapewear in 2020. Although not including waist trainers and technically safe to wear, the notion of feeling the need to compress your body when pregnant could raise some eyebrows.

True or not, as soon as comedian Heather McDonald suggested the Kardashians used the diabetes drug Ozempic to quickly lose weight on her podcast, Juicy Scoop, it was clear the drug’s name would enter into mainstream discussions.

Medically known as semaglutide and created by Danish pharmaceutical company Novo Nordisk, the weight loss injection is intended to treat Type 2 diabetes. However, one weekly shot into the buttocks or stomach reportedly also helps shed the pounds.

It’s not hard to guess why taking a pharmaceutical drug for anything other than its intended use could be dangerous. Not only could it increase the risk of pharmacies selling out and leaving people with diabetes in need, according to the FDA it could also cause “inflammation of the pancreas, gallbladder problems, low blood sugar, acute kidney injury, damage to the eye’s retina, increased heart rate, and suicidal behaviour or thinking”.

This may never go beyond speculation on gossip accounts like Deuxmoi, but any public association between the Kardashian’s svelte figures and a drug is dangerous fodder.

These vitamins were spruiked by little sister Kylie Jenner as a means to rejuvenate and strengthen your hair and nails. The little gummies, launched in 2016, may not make your hair fall out in clumps, but it doesn’t necessarily do what it promises either.

Its main ingredient is biotin, a B vitamin that aids metabolic processes, and one tablet contains more than 150 times the daily requirement. Yet, biotin has not been scientifically proven the clincher in hair health, and the gummies contain little else which could be of benefit, such as iron or calcium.

Unless you suffer a vitamin deficiency, these pricey gummies (selling for US$53 for a months’ worth) are unlikely to revolutionise your locks.

Created by Canadian company Duchesnay Inc., this prescription morning sickness pill can be used by pregnant women struggling with nausea and vomiting. Approved by the FDA in 2013, its side effects include drowsiness, which can become severe, so it’s recommended people avoid using Diclegis when operating heavy machinery.

Diclegis may not come with any other severe risks, and it is permitted to advertise pharma drugs on social media in the US, but to do so, there must be a fair balance between the risks and benefits of said drug.

In 2015, Kim decided to jump on the bandwagon, having suffered through her own uncomfortable pregnancies, first with North and then Saint. However, Kim failed to mention any of the risks involved. Instead of warning women not to drive when taking the pills, she just raved about its miracle work against nausea.

The FDA deemed Kim’s original post “false or misleading”, and asked her to recall it.

Having learned her lesson, Kim returned to the fold in 2017 when her surrogate was expecting her third child. This time her sponsored post included the necessary health warnings, including “common side effects may include drowsiness”, and “Diclegis hasn’t been studied in women with hyperemesis gravidarum”. However, with increasing uncertainty over the efficacy of the drug overall, Kim has since removed the Instagram post and laid low on the Diclegis front.