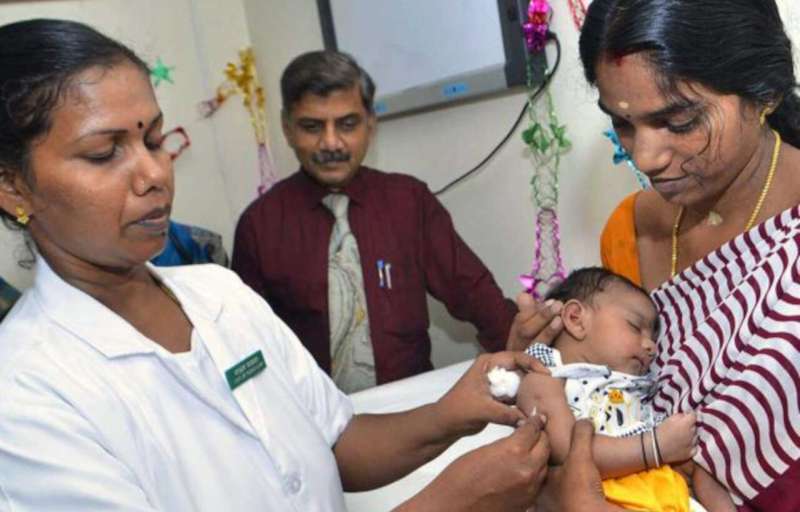 Polio eradication has advanced remarkably, despite the COVID-19 pandemic. The limitations on travel and movement during the pandemic contained the spread of poliovirus in endemic countries—Afghanistan and Pakistan. Even circulating vaccine-derived poliovirus (cVDPV) cases that accounted for most polio-related paralysis in recent years, have dropped.

But the impact of the pandemic on health and routine immunization systems might make it more difficult to keep the world polio-free, even after the last case. To avoid recurrence, polio vaccines will have to be administered long after polio is eradicated.

The disruption of routine immunization systems due to COVID-19 saw a global drop of about seven percent for two sets of childhood vaccines’ estimated coverage in 2020, with eight million more children missing vaccine doses as a result. Ninety percent of 105 countries reported disruptions to immunization services, according to a paper in The Lancet.

That said, the crippling, pediatric disease polio, first recorded in an Egyptian painting 3,500 years ago, is definitely on its way out. There were no symptomatic cases of wild polio between the end of January and mid-November 2021—the longest period in modern history, without any new polio paralysis cases. At the end of 2021, there were five cases of wild poliovirus (compared to 140 cases in 2020) and 643 cases of cVDPV (compared to 1,113 cases in 2020).

The Global Polio Eradication Initiative’s plan to be officially rid of wild polio and of cVDPV by 2026 seems on course, although a recent report of a wild poliovirus case in a three-year-old girl in Malawi has raised serious concerns. The first case of wild poliovirus in Africa in more than five years, it underlines the risk of infections in the future.

Thousands of biological samples around the world may still contain live polioviruses. Some immunocompromised children were given oral polio vaccines, which have a weakened live poliovirus, and they might keep shedding the virus for the rest of their lives.

We must now think about stopping polio recurrence, by integrating polio prevention into immunization systems. The WHO’s Strategic Advisory Group of Experts on Immunization (SAGE) meeting in October 2021, acknowledged that “countries have different epidemiological risks and supported the use of injectable polio vaccine (IPV)-only schedules in countries in polio-free regions with high routine immunization coverage…that decide to withdraw bivalent oral polio vaccine (OPV) before certification of eradication.”

As routine immunization systems are under stress, the SAGE said that, once adequate supplies are available, countries could consider adopting hexavalent (six-in-one) vaccines, as soon as they decide to modernize their Expanded Programme on Immunization, by increasing the IPV regimen from two to three or more doses. Hexavalent vaccines can reduce the number of injections, making vaccination more acceptable to parents.

In South Africa, where hexavalent vaccines are used, 86 percent of caregivers felt that three or more injections in a single visit were excessive for their children. Recently a South African expert told us that improvements in uptake translate into increased vaccine coverage. GAVI, the Vaccine Alliance, has a planning process through 2022 and 2023, on how to incorporate hexavalent vaccines into its programs.

Future shortages of combination vaccines, and probably of the IPV containing combination vaccine, seem highly likely, as confirmed through an independent modeling exercise. It takes five years or more, from planning to the first vials of a vaccine being shipped; and much longer for producers to recoup the large investments required. Yet, most vaccine purchases are made on shorter tenders, with uncertainty about demand.

Without some guarantee of future demand for combination vaccines in the post-polio era, vaccine producers are unlikely to invest now. That is true even of the biggest vaccine developers, and more so for emerging producers in Africa and Asia. Policymakers see these as crucial to future health security in geographies that may not have access to vaccines produced out of traditional hubs.

We are both part of a group called RISE—Routine Immunization to Secure Eradication—that brings together experts in infectious diseases, supply chain management, financing and policymaking. At a recent meeting, we agreed to work with the polio community to develop an “advance guarantee mechanism” to give producers the assurances they need to invest now. Over the next few months, we will be consulting and working to propose a mechanism that finance institutions, donors and implementing countries can adopt.