Unidentifiable object is pulled out of 15-year-old boy’s nose: Mass had been lodged for five years, contained bits of foil and was causing a foul-smelling discharge

A 15-year-old boy has had an unidentifiable object pulled out of his nose that had been lodged there for five years.

Scottish doctors were left scratching their heads as to how the mass, which was causing a foul-smelling discharge, got into the unnamed teenager’s nose because it was ‘too large’ to do so naturally.

They were also confused about what the 2.5cm by 2.5cm foreign body was. Tests eventually showed it contained tiny fragments of metallic foil.

Medics in Livingston believe the boy put a much smaller object into his nose when he was 10, which grew larger and picked up dust and mucus.

Another theory is the mass, which was lodged in his left nostril, became stuck in the boy’s nose after a bout of forceful coughing or vomiting. 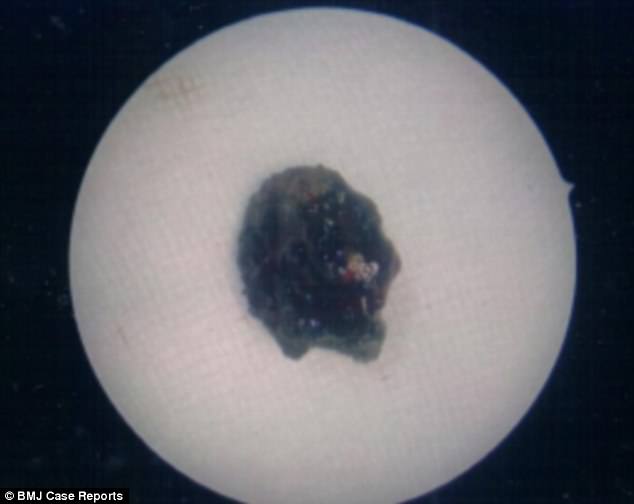 The boy had complained about a blockage in his left nostril and a ‘foul-smelling’ discharge for five years.

NHS otolaryngologists, or ear, nose and throat specialists, shoved a microscope into his nostril to discover what was causing the problem.

They quickly noticed pus from his left middle meatus – one of three passages in the nasal cavity – and they were unable to get past it.

A CT scan of his sinuses then revealed an irregular mass lodged in his left nasal passage that measured a square-inch. It was eroding his septum.

The boy, who had no learning difficulties, denied having placed anything in his nose.

Ms Hulse and colleagues were forced to push the object into the boy’s oropharynx because it was so big. They pulled it out through his mouth.

On closer inspection, it was ‘encrusted in dark, friable, carbonaceous material with a solid central core of an unidentifiable nature’. 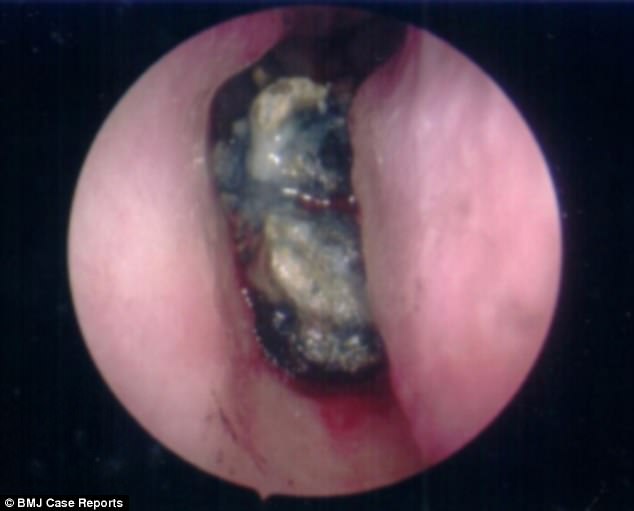 They were also confused about what the 2.5cm by 2.5cm foreign body was. Tests eventually showed it contained tiny fragments of metallic foil 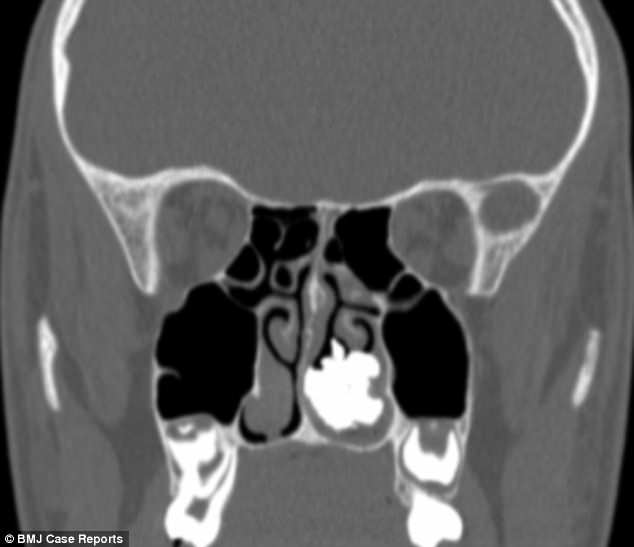 The boy, believed to be from Edinburgh, had complained about a blockage in his left nostril and a ‘foul-smelling’ discharge for five years (scan shows the blockage)

An analysis of the specimen revealed a dark clot with ‘discrete fragments of copper-coloured metallic foil within’, they wrote in the journal.

Ms Hulse and her team added: ‘Unsurprisingly, the patient’s symptoms were relieved following its removal.’

‘This is an unusual case of a large chronic nasal foreign body with no known history of insertion.

‘If the patient had indeed had symptoms for the previous five years, this suggests the foreign body was inserted when he was around age 10.’

But they added this would be unusual in a child without learning disability.

Ms Hulse and team wrote: ‘What is even more curious is how the object became lodged in the posterior nasal space when it was clearly too large to fit through the nasal passage.

‘One possibility is that the object was actually ingested and inserted in a retrograde fashion after forceful coughing or vomiting.

‘Another possibility is that a much smaller foreign body was inserted anteriorly and then acted as a nucleus for rhinolith formation.

‘Rhinoliths arise when chronic inflammation of the nasal mucosa and stagnation of mucus, often caused by a neglected foreign body, leads to deposition of calcium and other mineral salts onto its surface.

‘This concretion of salts leads to progressive growth of the object, which appears as a hyperdense structure on CT scan.

‘By this mechanism, it is conceivable that the foreign body was inserted when the patient was much younger and took many years to become symptomatic due to its slow growth.’