A low-fat diet full of fruits and vegetables could reduce the risk of breast cancer death, new study finds

Eating a low-fat diet with plenty of fruits and vegetables could protect women against breast cancer, according to a new study.

Researchers found that women who reduced their consumption of ice cream, cakes  and other dairy products were less likely to die from the disease.

Women with a poor prognosis also developed fewer tumors after cutting out fat, said the team, hailing from different institutions including the Hope National Medical Center in California and the Harvard TH Chan School of Public Health.

With one in eight US women developing breast cancer over the course of her lifetime, the researchers hope the findings can help increase the rates of survival in tandem with medical treatment. 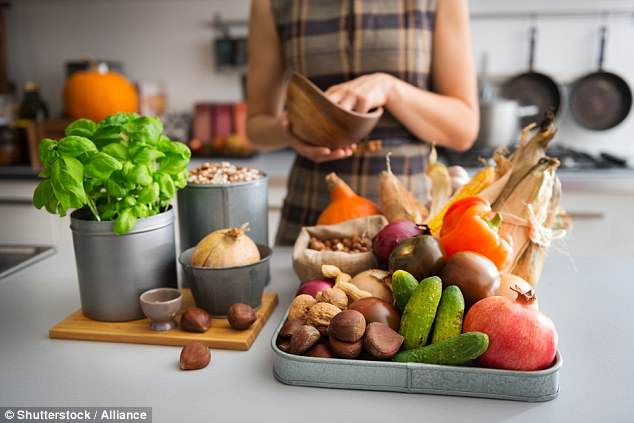 Eating a low-fat diet along with plenty of fruits and vegetables could protect women against breast cancer, according to a new study

For the study, the team looked at almost 49,000 postmenopausal women between the ages of 50 and 79 from the Women’s Health Initiative Dietary Modification trial.

The women had no previous breast cancer diagnosis and, based on a food questionnaire, were not consuming more than 32 percent of their daily calories from fat.

About 19,500 participants took part in dietary intervention and reduced their fat intake to 20 percent of their daily calories and increased their consumption of fruits, vegetables and grains.

In comparison, more than 29,000 women continued eating their normal diets.

Over the course of the trial, 1,764 women were diagnosed with breast cancer – 671 in the intervention group and 1,063 in the usual diet group.

The team found that there were eight percent fewer deaths in the intervention group with 68 deaths compared to 120.

Fewer women developed tumors, 152 in the intervention group compared to 305, and there were also fewer deaths from cardiovascular disease.

When it came to the 10-year survival rate, it was higher for the dietary group, 82 percent in comparison with 78 percent, respectively.

Dr Rowan Chlebowski, a breast cancer specialist at Hope National Medical Center in Duarte, California, said that although the difference in rates of death were ‘not statistically significant’, the prognosis rates were.

‘There were fewer poor-prognosis cancers in the dietary group,’ he said.

The new research follows a previous study published in the Journal of the National Cancer Institute suggesting that women who eat full-fat dairy products after a breast cancer diagnosis have a higher risk of dying.

Nearly 1,900 women diagnosed with breast cancer were followed for 12 years.

However, eating low-fat dairy was not found to reduce the risk of death or the chance of the cancer returning.

‘You want to eat a diet that is rich in green leafy vegetables, fruits, lean proteins, and not high in oil or fat,’ she said.