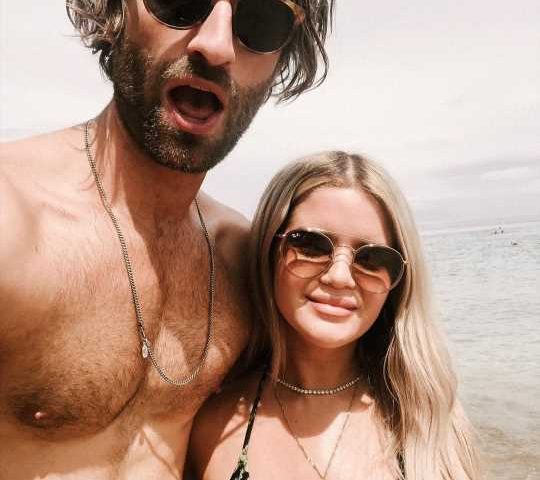 If the first word Maren Morris‘ baby on the way says is “Aloha,” there’s a good reason for that.

In an interview with Storme Warren for SiriusXM’s The Highway, the 29-year-old country megastar revealed that given her pregnancy’s timing, it’s possible the son she’s expecting with husband Ryan Hurd in March was conceived during a tropical getaway.

“I was here five months ago with my husband Ryan for vacation, and now I am mysteriously five months pregnant,” said Morris, whose interview was conducted in Maui, Hawaii, during the BMI Maui Songwriters Festival.

“So Hawaii must agree with me,” she joked, laughing.

Tyler Hubbard Jokes Filming a Romantic Music Video with His Wife Is the Reason for Baby No. 2

This time around, though, Morris’ vacation plans looked a little bit different.

While she shared a photo of herself with what looked like a frozen cocktail in June, on Wednesday, the GIRL singer lamented her lack of a boozy beverage.

“Someone send a good virgin colada recipe. 🍹#2ndTrimester,” Morris captioned a photograph of herself baring her baby bump atop a lawn chair in a purple bikini, with a cup of water next to her.

“Stunning,” fellow country singer and mother of two Jana Kramer wrote in a comment, offering her suggestion for a drink in a separate remark: “Lime, ginger, honey, club soda.”

Morris told Radio.com last month at MusicTown Detroit that she initially thought she would be welcoming a girl because of the energy she has given off lately with her music and the fact that she’s “surrounded by women.”

“I grew up with one sister, my mom owns a hair salon, so I was just always surrounded by women,” she said ahead of her Stars and Strings performance. “I have an affinity for them. There’s women in my band, in my crew.”

“I’ve never really had a male sibling or anything like that, so I had just felt like I’m gonna have a girl ’cause I’m constantly surrounded by women,” the mom-to-be added. “And I put a record out this year called GIRL. And nope — the test said it was a boy!”