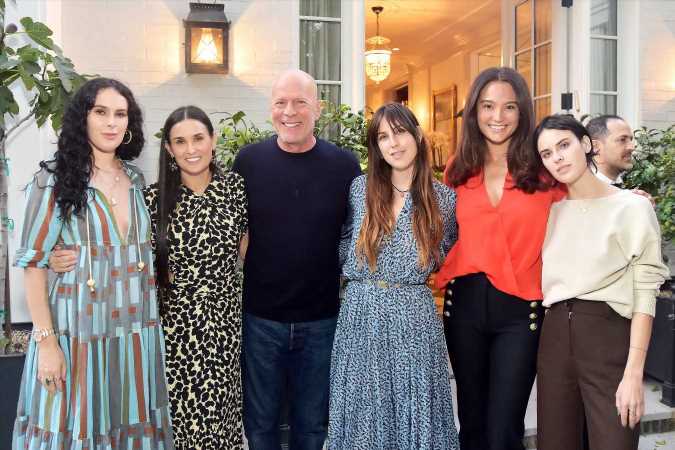 The more the merrier! These Hollywood families have come out stronger as they’ve come together

After 13 years of marriage, Willis and Moore share three daughters together: Rumer, Scout and Tallulah. But the family has grown since Willis married Emma Heming in 2009: the father of three is now a father of five and big sister Rumer could not be happier to have little sisters Mabel and Evelyn added to the Willis crew.

“You are my best friends for life. You make me a better version of myself everyday and I am so excited to embark on another year with you,” Rumer captioned this sweet sister photo.

When it comes to family, no bond is stronger than Cannon’s #NcredibleGang. The actor shares twins Monroe and Moroccan with ex-wife Carey and coparents Golden with model Brittany Bell.

In addition to strong family genes, the Hadids have strong family values that keep them close as a blended family. Real estate developer Mohamed’s first marriage to ex-wife Mary Butler ended in 1992 and the former couple share Marielle and Alana together. Then, when Mohamed married ex-wife and former Real Housewives of Beverly Hills star Yolanda in 1994, the couple welcomed Gigi, Bella and Anwar before they split in 2000. Despite what went on with their parents, the Hadid kids remain super close.

The Toth family shared this picture-perfect Christmas card on mama Witherspoon’s Instagram in 2018. The photo includes Ava and Deacon, whom Witherspoon shares with ex-husband Ryan Phillippe, and Tennessee, whom the star shares with her hubby Toth.

Baby Kenzo Kash is the latest addition to the Hart Family. Kevin and Eniko welcomed their first child together in 2017 and he’s already enjoying family vacations with older sister Heaven and brother Hendrix, whom Kevin shares with ex-wife Torrei Hart.

It’s one football-loving family! The New England Patriots quarterback dad and supermodel mom are happy parents to Jack, whom Brady shares with ex-girlfriend Bridget Moynahan, and little ones Benjamin and Vivian.

Once the couple got married in Miami in August 2014, Union became stepmom to Zaire, Zion and Xavier, Wade’s three sons he shares with ex-wife Siohvaughn Funches. But in November 2018, the Wade family made room for one more: Kaavia James, who is her dad’s mini-me and has her own Instagram page, arrived via surrogate and the family could not be happier.

The singer became stepmom to Savannah and Seth when she got married to music manager Blackstock in October 2013. After the couple tied the knot at Blackberry Farms in Tennessee, Clarkson was ready to grow their family right away.

“When you get married, it’s like official,” she told PEOPLE. “You’re starting a family and we want to have more children, so we’re just excited.”

In addition to Blackstock’s children he shares with ex-wife Melissa Ashworth, the pair have added daughter River and son Remington to their beautiful family.

The title of most famous blended family in Hollywood has to go to the Kardashian-Jenners. Throughout their 23-year marriage, Kris and ex Caitlyn (formerly known as Bruce) shared 10 children together.

Caitlyn has four kids from previous marriages: Burt and Cassandra with ex Chrystie Scott and Brandon and Brody with ex Linda Thompson. Kris has four children from her first marriage to the late Robert Kardashian: Kourtney, Kim, Khloé and Rob. Then, the couple added the youngest siblings Kendall and Kylie to their kid count before Kris filed for divorce in 2014.

The Wilsons have their hands full with Future Zahir, whom Ciara shares with rapper Future, and their baby girl Sienna Princess Wilson.

Even before the two got engaged in March 2019, Lopez, Rodriguez and their combined four kids were already their own blended family. Lopez and ex-husband Marc Anthony have twins Maximilian “Max” David and Emme Maribel, while Rodriguez and ex-wife Cynthia Scurtis share daughters Ella and Natasha. Although the newly engaged couple hasn’t started wedding planning yet, a source told PEOPLE that their kids will “definitely” play a huge role in their wedding.

The Smiths celebrated 20 years of marriage in December 2017, and according to Jada, have evolved their relationship status from “married” to “life partners” to “dissolve all the expectations” they had of marriage. This shift in thinking has helped the stars with become stronger parents to Willow, Jaden and Trey, whom Smith shares with ex-wife Sheree Zampino.

The comedian is a happy father to 10 kids. Murphy shares five children with ex-wife Nicole Mitchell: Bria, Shayne, Zola, Miles and Bella, and also has two children with his fiancée Paige Butcher: Izzy and Max.