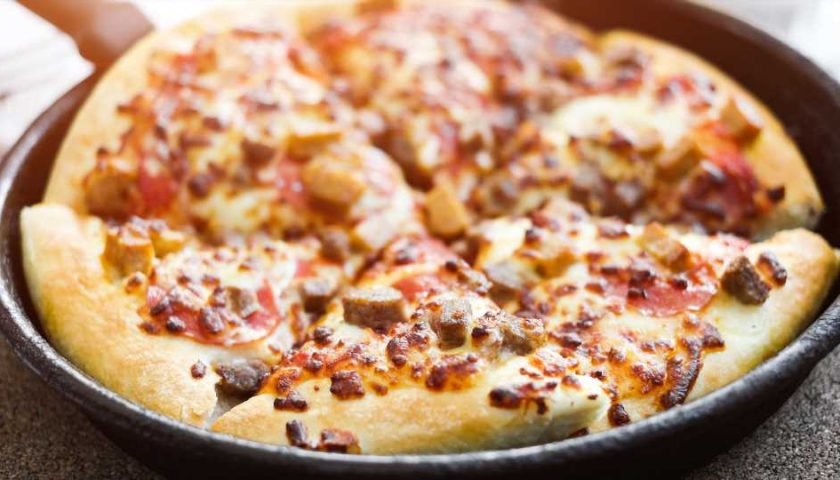 The thick layer of gooey mozzarella cheese, a generous layer of pepperoni topping, that perfectly flaky, buttery crust: It’s easy to devour an entire box of Pizza Hut’s pan pizza. And they know it, too. Which is why, after three years of tinkering with its Original Pan Pizza recipe, Pizza Hut has somehow improved it.

So, what’s different about the recipe, you ask?

The updated Original Pan Pizza — now available at Pizza Hut restaurants nationwide — basically gives you more of what you want: a flaky, crispy crust and a soft, chewy center. To achieve this, the new-and-improved pizza is baked in a newly engineered pan, one that allows for a consistently golden-brown, crispy, buttery crust. It’s also now topped with a new blend of cheese and sauce. According to Pizza Hut’s Senior Director of Culinary Innovation and Strategy Penny Shaheen, over the several-year testing period, they determined the “perfected blend of cheese and sauce ratio.” “Pizza Hut has a rich history of things we’re known for, and creator of the Original Pan® Pizza is certainly at the top of the list,” Marianne Radley, Pizza Hut chief brand officer, says in the press release. “Re-inventing our most iconic Pizza Hut menu item is just another way we’re showing our customers that as a company we’re about the pizza first and will never become complacent when it comes to taste.”

The best part of this announcement? Pizza Hut did us all a solid and added the pan pizza recipe to its Everyday Low-Price Deal menu, meaning you can order a large, two-topping Original Pan Pizza for just $7.99 online.

We know what we’re eating tonight.