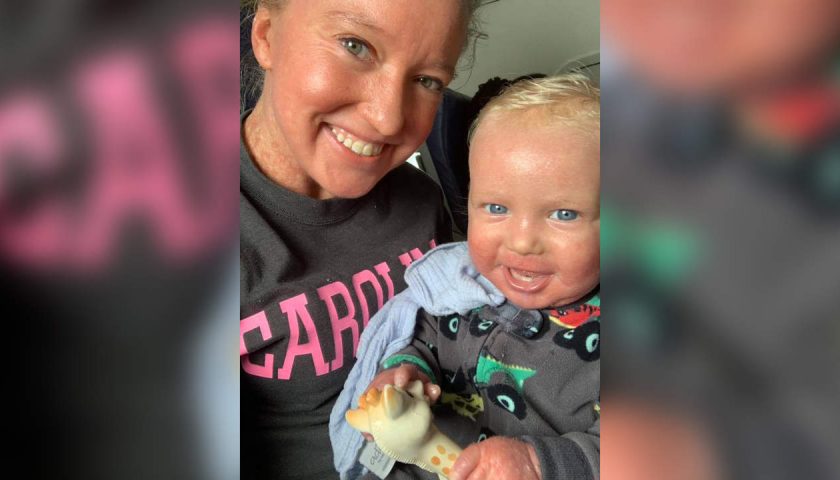 A mother is speaking out after she and her son were “humiliated” on a recent American Airlines flight. Jordan Flake and her one-year-old, Jackson, both have a rare genetic condition that causes their skin to be super dry and scaly. The condition isn’t contagious, but the crew was concerned about their “rashes” and ended up asking them to leave the flight.

Flake, who is from South Carolina, wrote about the experience on Facebook. “We boarded our American Airlines flight where everyone smiled and talked to Jackson,” she wrote. “Before takeoff a man (employee called on flight to handle the situation) came up to my row and asked the 2 men sitting next to me to get up. He then quietly asked me about ‘my rash’ and if I had a letter from a doctor stating it was ok for me to fly.”

She explained to the man that she and her son both have a genetic skin condition called ichthyosis. “He walked up to the front to talk to the crew,” she wrote. “He apparently also Googled it during that time. He came back and said he apologized but we wouldn’t be able to fly and we had to get off the plane. He helped me get my bags and Jackson.”

Flake continued: “The pilot seemed ok with it, but the flight attendant rudely said (without even acknowledging me) ‘well she doesn’t have a letter from a doctor, so…’ I have never been so humiliated in my life!”

In an essay on the website Love What Matters, Flake wrote, “I have never been asked to show a letter. I have never been told by a doctor that I had to have documentation stating I wasn’t contagious, or whatever they were assuming.”

Ichthyosis is an umbrella term for a group of rare genetic skin diseases characterized by dry, thickened, and scaling skin, according to the National Organization for Rare Disorders (NORD). There are over 20 types of Ichthyosis, and every type affects the appearance of the skin differently. (Flake didn’t specify which type she and her son have.) According to the American Academy of Dermatology (AAD), the condition can make skin look like fish scales.

The skin cells of people with ichthyosis either grow faster than the body can shed them, causing the thickening and scaling. Their skin might also shed slower than usual, according to NORD, resulting in painfully tight, cracked, or itchy skin.

About 16,000 babies are born with the genetic mutation that causes ichthyosis each year, according to the Foundation for Ichthyosis and Related Skin Types. However, about 95% of people with the condition have the ichthyosis vulgaris type, which is the mildest type and is often mistaken for extremely dry skin.

“No one’ll love you as you are…. I am who I’m meant to be. This is me!” . No one ever told me those words…but I said them to myself constantly. When your skin feels different, when people wipe their hands after they shake yours, and people hesitate to hold your hand…it makes you feel very self conscious. Then I began to accept the fact that this is the way God made me…for a reason! I just had to find the reason and I think I’m beginning to ❤️ #sjbraw #ichthyosis #thisisme #visibledifference

There’s no cure for ichthyosis, but symptoms can be managed with extra-strength moisturizers. And as we said earlier, ichthyosis is not contagious.

American Airlines told Today that it spoke with Flake directly, upgraded the family on their next American flights, and refunded the cost of the trip.