A woman’s anus tore apart after she fell off the back of a jet ski, a grisly case report has revealed.

The unidentified 22-year-old, who lives in Australia, ‘slipped off the back’ when the driver accelerated.

She agonisingly landed on her backside with the chassis caught between her legs, striking her perineum — the area between the anus and genitals.

The woman started bleeding and went to Melbourne’s Frankston Hospital, where doctors found a 2in (5cm) cut stretching from her tail bone to anus. 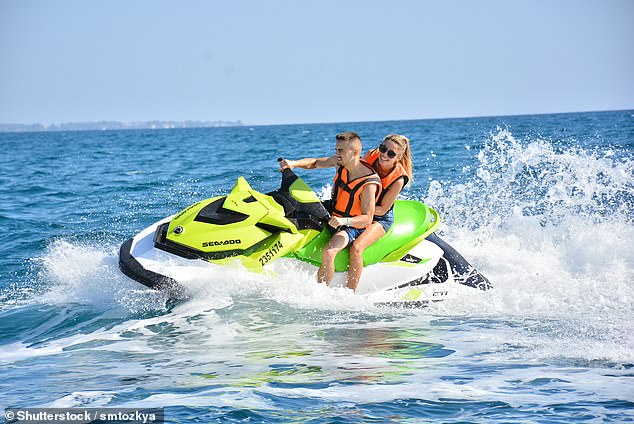 Scans showed she had torn her sphincter as well as the lining of her rectum.

Doctors took her to the operating theatre to be examined under general anaesthetic, where they found the cuts extended up the wall of her rectum.

They stitched up the wounds and gave her a colostomy bag to allow her injuries to heal.

After 12 weeks, she had completely recovered and she is now on a waiting list for surgery to reverse her colostomy procedures.

Her medics said ‘severe anorectal’ injuries like the one she suffered are ‘uncommon but typically arise from high-speed jet ski accidents’.

Last year another woman from Victoria, Matilda, 21, was left with serious bowel problems after falling off one of the vehicles and the jet stream shot up her anus.

The woman said the jet did not touch her.

Researchers said serious injuries caused by jet skis like hers are becoming more and more common in Australia.

Writing in the journal, they said: ‘Historically, loss of control whilst water-skiing at high speeds resulted in similar injuries as this case.

‘However, as water-skiing has lost popularity and jet skis have become more commonplace on our beaches, jet ski-related trauma is becoming increasingly prevalent.

‘Only three have reported injuries resulting from falling off the back of an accelerating jet ski, and all described the mechanism of injury relating to the barotrauma from the high-pressure waterjet to the perineum.’