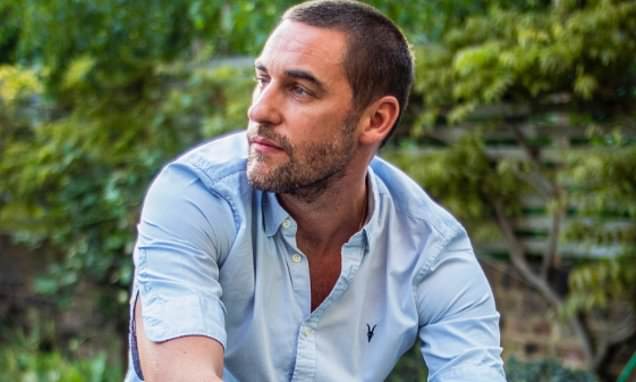 What does a ‘perfect’ day of eating look like? Nutritionist reveals the best combos to max out your vitamin intake – whether you’re a meat lover or vegan 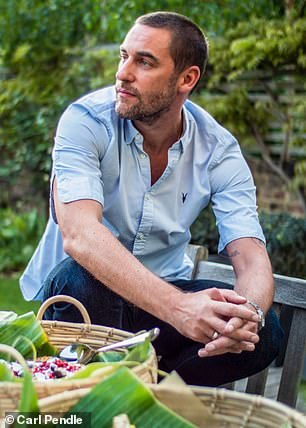 A report revealed that in the last 20 years there’s been a downturn in a number of important nutrients we’re getting from the food we eat. Rob Hobson, a London-based nutritionist and Head of Nutrition at Healthspan, offers some tips to get more

Are you getting all the key nutrients you need from your diet? Probably not, if the latest research is anything to go by.

Just this week, a report revealed that in the last 20 years there’s been a downturn in a number of important nutrients we’re getting from the food we eat.

The figures, from the UK Health and Food Supplements Information service, showed that our fruit and vegetable intakes are still below the recommended level – and some adults’ intakes have actually fallen by a third.

The intake of fiber – which has a host of health benefits including reducing the risk of cardiovascular disease, type 2 diabetes and bowel cancer – is also low.

Only 4 percent of women and 9 percent of men eat the recommended 30g per day.

These findings are similar to those in the US, where fiber intakes are also lower than recommended.

Not only that, but a recent report from the Centers for Disease Control and Prevention (CDC) found that just 12 per cent of adults are meeting the recommended fruit intake and only 9 per cent are eating enough vegetables.

And it’s not just adults – many teenage girls continue to eat poorly, with many failing to achieve the recommended daily intake for several minerals, in particular.

Among women (including teens), iron is one of the most common nutrient insufficiencies and those not eating enough in their diet has continued to drop, according to the HSIS report.

Iron is important in making red blood cells, which carry oxygen around the body – and a lack of it can cause iron deficiency anemia, symptoms of which include tiredness and lack of energy, shortness of breath and pale skin.

Among all adults, selenium intake remains low, with 25 percent of adults sitting below the lower reference nutrient intake (LRNI) – the minimum amount of a nutrient we should ideally be getting for good health.

This again is concerning because selenium is known to be a powerful antioxidant that helps to protect us from developing heart disease; it also delays the signs of premature ageing.

Other nutrients of concern where levels have dropped over the last 20 years among certain groups include:

• Vitamin A – needed for a strong immune system and healthy skin

• Potassium – a mineral that regulates fluid levels and nerve and muscle function in the body, including heart rhythm

HOW TRENDY DIETS HAVE AFFECTED OUR NUTRIENT INTAKE

Certain diets have become more popular over the years and this includes the rise in veganism.

While there is no reason why you can’t get everything you need on a vegan diet, vegans in particular need to pay attention to the foods they eat in order to ensure they get sufficient nutrients in the absence of animal foods. Areas where they are likely not to be getting enough include vitamin B12, which largely comes from meat.

Flexitarianism – where we try and eat less meat in favour of plant-based alternatives – is also becoming a popular approach, especially in light of the awareness raised by Veganuary and Meat-Free Mondays.

Indeed, a recent survey by YouGov showed that 14 per cent of respondents classed themselves as flexitarian, meaning they eat a mixed diet, mainly vegetarian and only occasionally meat.

This could also impact on vitamin and mineral intakes.

So how do you achieve the ‘perfect’ diet regardless of the way you choose to eat? Below are my suggestions for an ideal day of eating…

A 200ml smoothie made with fortified (i.e. with calcium and B12) almond milk and one banana. 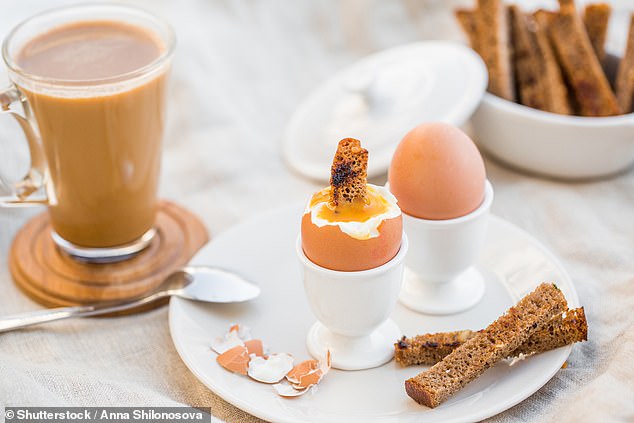 WHY THIS PLAN WORKS FOR MEAT LOVERS 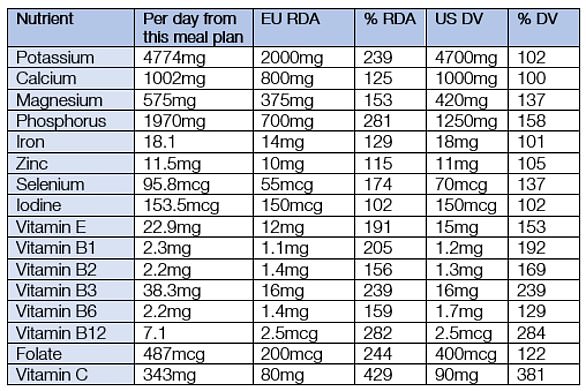 Each of the tables below shows how this menu gives you all the recommended nutrients you need in a day.

In theory, as there is nothing excluded from this way of eating, someone who eats all foods should easily be able to glean everything they need from their diet. However, just because you can eat all sorts of foods doesn’t mean you will, and this is reflected in the facts laid out by the new HSIS report, which showed that fewer than 30 per cent of adults eat five portions of fruit and veg a day.

Also, not everyone eats a perfect diet all of the time and other factors such as cooking skills and food budgets can affect our food choices.

If you suspect your diet isn’t as good as it should be – or you’re restricting your diet to try and lose weight, for example – then you could consider taking a multivitamin and mineral supplement (try Healthspan Multivitality Gold).

And if you don’t eat any oily fish such as salmon on a weekly basis, then an omega 3 supplement may help to ensure your intake.

Someone following a pescatarian diet doesn’t eat meat – but does eat fish.

A 200ml smoothie made with fortified almond milk and banana. 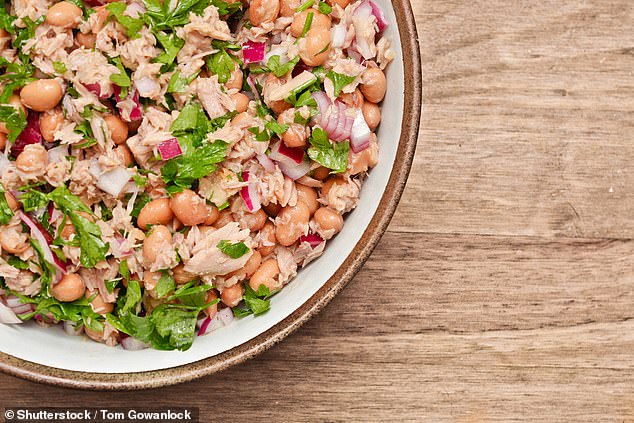 White bean and tuna salad is rich in nutrients such as B12, which is abundant in meat

½ red pepper and ¼ cucumber (in slices) with 2 tbsp hummus.

WHY THIS PLAN WORKS FOR PESCATARIANS 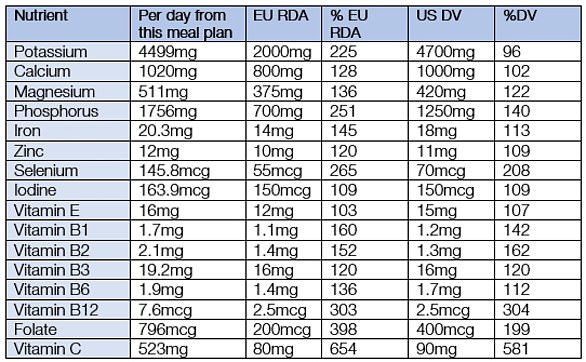 This diet only cuts out meat, so the advice is similar to that of a meat-eater in that people following this diet should include a wide range of foods to insure they glean sufficient amounts of all nutrients.

Cutting out meat is not a bad thing – we can certainly live without it perfectly well – and the benefit of this diet is that includes fish, some of which (trout, sardines and shellfish) are rich in nutrients such as B12 which is abundant in meat.

As with meat-eaters, only those who feel their diet isn’t as good as it should be, or those cutting down on their food intake to lose weight, may benefit from a multivitamin and mineral supplement. That’s because food should always come first as the way to get all the vitamins and minerals your body needs.

Plus 150ml glass of fruit juice. 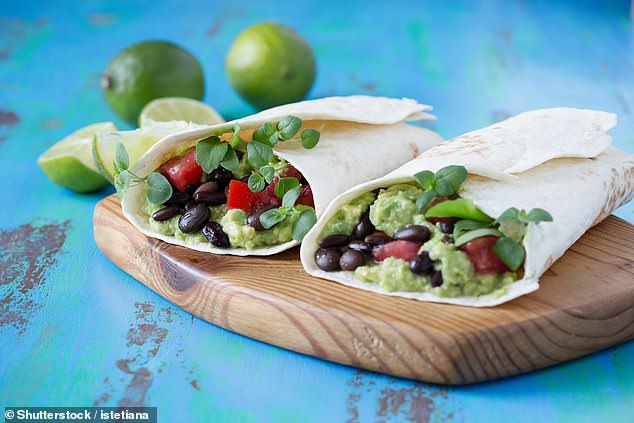 WHY THIS PLAN WORKS FOR VEGETARIANS 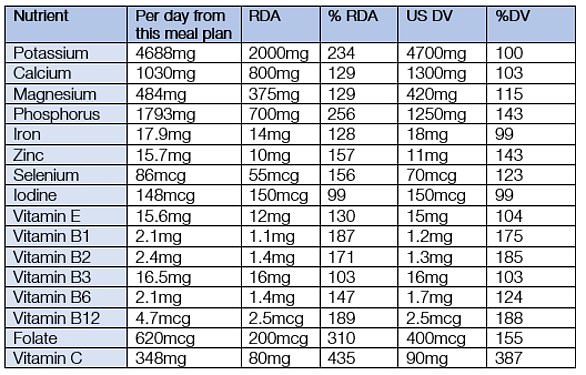 Vegetarian cuisine is rich in many of the essential micronutrients, but you need to eat a wide variety of foods, including plenty of vegetables and pulses.

It shouldn’t be automatically assumed that a vegetarian diet is going to be healthy as there are plenty of vegetarians who rely on processed meals or cheese and pasta.

The lack of meat could leave some vegetarians lacking in iron and vitamin B12, but these nutrients can be sourced from other animal products such as dairy foods as well as dark green vegetable and pulses.

Vegetarians, especially teenagers, may benefit from a multivitamin and mineral supplement and in particular one that contains enough B12 and iron – in other words the full RDA for these nutrients (N.B. women have a higher need for iron than men.)

The lack of oily fish in this diet also means relying on nuts and seeds for omega 3, which may not be sufficient so vegetarians may want to explore the option of a supplement (sourced from sea algae). 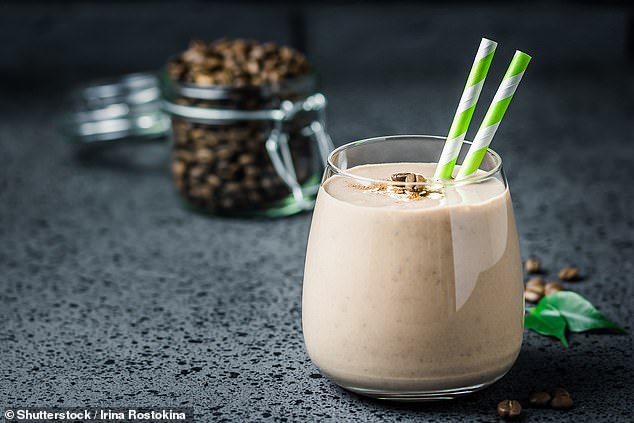 WHY THIS PLAN WORKS FOR VEGANS 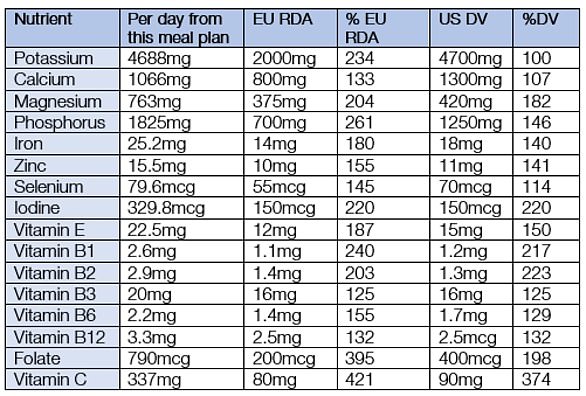 There is no reason why you cannot get everything you need on a vegan diet, but it does take some planning and a good understanding of where the gaps might be when you cut out certain foods from your diet.

Nutrients that may be an issue include calcium, B12, iron and iodine, which are found abundantly in many animal foods.

Iodine can also be tricky, and it was the inclusion of a little dried seaweed in the salad lunch that boosted the levels beyond the recommended daily amount.

Vitamin B12 is also really tricky and aside from yeast extract, fortified foods like plant drinks and breakfast cereals are the only way to get to grips with your intake.

Vegans, especially those new to veganism, may benefit from an appropriate multivitamin and mineral or simply a B12 to help keep their level of this micronutrient up.

The lack of oily fish in this diet also means relying on nuts and seeds for omega 3, which may not be sufficient so vegetarians may want to explore the option of a supplement (sourced from sea algae).