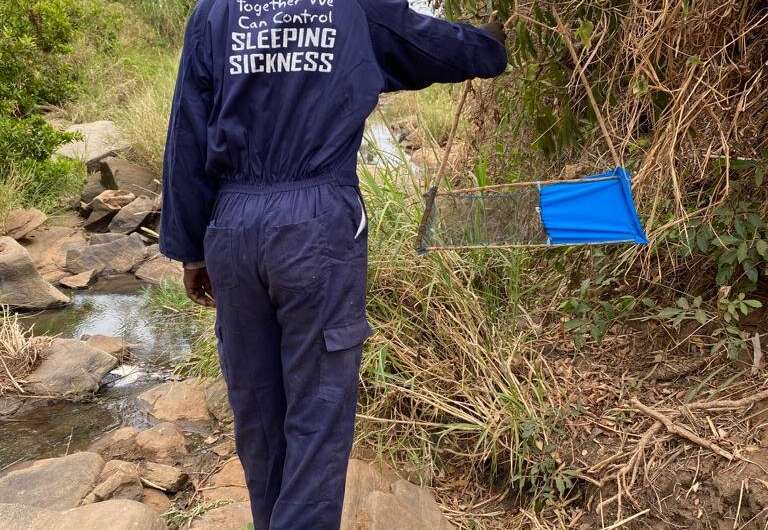 The Ministry of Health in Uganda and partners, including LSTM, are celebrating the elimination of Gambian sleeping sickness following the recent announcement from the World Health Organization (WHO).

The milestone was marked with a ceremony in Kampala, Uganda, on the Oct. 21. The elimination of Gambian HAT (gHAT) has been achieved through an integrated approach with screening and treatment and vector control.

Until recently, vector control for Gambian HAT was not widely used because the available tools were very costly and logistically demanding to deploy, this all changed with the development of Tiny Targets.

An international team of researchers from Africa and Europe investigated the host-seeking behavior of riverine tsetse, the vectors of gHAT.

They discovered that in contrast to other tsetse species, smaller sized targets were more efficient at attracting riverine flies. Tiny Targets were first introduced in Uganda in 2011 in small scale trials, before being scaled-up to a full control program in partnership with COCTU in 2014. The project covered 2,500km2in five districts in northwest Uganda, and there was further scale-up from 2017 with expansion to two additional districts.

The partnership between LSTM and COCTU on the Tiny Targets program to control tsetse flies, has made a significant contribution to the sleeping sickness elimination efforts.

Vector Biologist and Program Manager, Andrew Hope, explains that they “saw an 80% reduction in the number of tsetse flies, once Tiny Targets had been introduced. Our modeling work shows that Tiny Targets have reduced gHAT incidence by 25% in northwest Uganda.”

The Tiny Targets team deployed these targets twice a year along the riverbanks, with a density of 20 targets, per kilometer. At some stages in the project the team was putting up about 35,000 targets a year, which was a huge logistical operation.

Andrew Hope thinks these efforts were well worth it: “I think this announcement is really important, it’s an incredible achievement for Uganda. The Ministry of Health and COCTU should be very proud of this success and I’m very happy to be able to participate at the ceremony and congratulate them in person. It is also a wonderful moment for my colleagues at LSTM who have been part of this work and I particularly congratulate Professor Steve Torr who has led the program at LSTM for most of the last decade.”

Professor Torr added that “other countries using Tiny Targets have also eliminated gHAT as a public health problem (Cote d’Ivoire) or are on track to do so (Chad, Guinea, DRC). Looking ahead, we are working with many partners to achieve WHO’s goal of eliminating transmission of gHAT by 2030.”

The announcement by WHO follows decades of work to eliminate gHAT. Large numbers of gHAT cases were recorded at the beginning of the 21st century and WHO prioritized the control and elimination of gHAT in countries where the disease was endemic. Case numbers decreased, eventually falling below 1000 annually for the first time in 2018.