After two years of COVID-19, followed by a “crazy, crazy start to the year” with floods, Jules Jackson noticed her three daughters were showing signs of anxiety.

It manifested in different ways. “My eldest one is quite dramatic, whereas the middle one internalises a lot more and the youngest one appears very easy-going but is really sensitive and a quiet crier.” 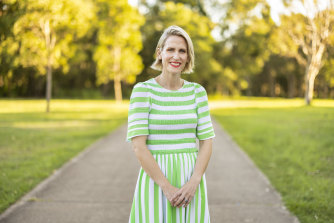 Jules Jackson has three daughters who were displaying signs of anxiety after two difficult years.Credit:Glenn Hunt

One day, while waiting at school drop-off, Ms Jackson came across a friend doing a module of online program Fear-Less Triple P, aimed at parents of children who have anxiety affecting their everyday life.

“The fact that it was in small, digestible bits was very appealing to me,” Ms Jackson said. “It was very practical and timely, I suppose, because these last three years have been pretty crazy as a parent.”

Fear-less Triple P Online, which was co-designed by clinical psychologist Dr Vanessa Cobham, an expert in child anxiety, is part of the Triple P Positive Parenting program, which aims to help adults understand and manage their child’s behaviour.

On Tuesday, the federal government will announce a $40.6 million grant to Triple P to provide all parents with free access to Fear-less Triple P online and Triple P Online resources.

The Victorian government last year also invested $1 million in the program to support more than 20,000 Victorian families whose children are facing anxiety.

The funding comes as The Age and Sydney Morning Herald, released a six-part podcast Enough, which explores the mental health crisis in young people.

“A recent study found 65 per cent of Australian parents were not confident they could identify signs of social or emotional problems in their children and a similar percentage didn’t know where to get help,” Mr Hunt said.

He said Triple P resources would give parents a better understanding of their children’s mental health and well-being, help them identify potential behavioural problems and outline when and how to access help.

Ms Jackson said she found the overcoming avoidance module especially useful, as her eldest daughter had started high school this year and was reluctant to attend at times during the term.

“We really listened to what that looked like for her and the fears and expectations she had,” Ms Jackson said. “We then used the skills on how to set her up for success and talked to her about how avoidance only creates more anxiety. This was truly so helpful for her and alleviated so much stress for us. You just want your kids to be happy at school so they can thrive.”

Dr Cobham said the program taught that there were multiple ways of thinking about the same situation because anxiety and avoidance tended to go hand-in-hand.

Tips for helping children with anxiety

“If a child is at the movie theatre and they see someone from school and wave to them and the child doesn’t respond, the stereotypical anxious interpretation of that situation is going to be ‘that person doesn’t like me’,” Dr Cobham said.

“Whereas there are many other ways of making sense of that friendship. Maybe that person didn’t hear me or see me wave.”

Dr Cobham, a professor from the School of Psychology at the University of Queensland who also works for the state’s child and youth mental health service, said there had been a massive explosion in anxiety and eating disorders in young people.

“We’re living through a pandemic, there’s a war on the other side of the world that has implications for us, there’s a lot of potential threat around,” she said. “That’s all pretty anxiety-provoking.”

Dr Cobham said anxiety was often overlooked in young people. However, it was a critical problem because it was a gateway disorder to other serious mental health problems, such as depressive disorders, substance abuse and suicidal ideation.

“If we can do something about anxiety and kids, then hopefully, we can head off a lot of other problems that tend to come up in adolescence and young adulthood.”

The Morning Edition newsletter is our guide to the day’s most important and interesting stories, analysis and insights. Sign up here.