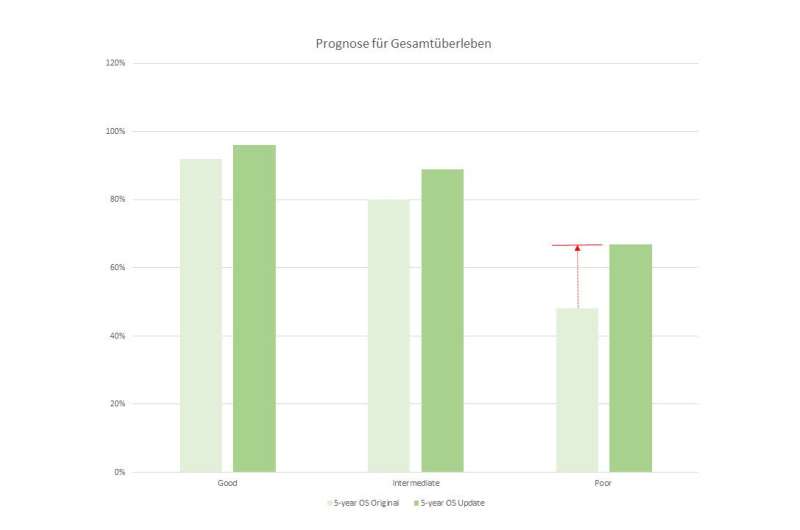 An international research consortium, in which Inselspital, Bern University Hospital and the University of Bern participated, has reassessed and updated the previous classification of metastatic testicular cancer in a comprehensive study. New indicators and a much broader database have enabled a more precise classification and more targeted treatments of patients. In addition, the new data show that the prognosis for patients with metastatic testicular cancer has improved significantly over the past twenty years.

Testicular cancer is the most common cancer among men under 40 in Europe and the U.S.. National statistics from the Cancer League indicate 471 new cases and 12 deaths in Switzerland. In general, the prospects for successful treatment of testicular cancer are good over time, and especially with early diagnosis, even further improved. Even if metastases are already present, testicular cancer can be successfully treated with appropriate therapy in the majority of cases.

The primary treatment for testicular cancer is the removal of the affected testicle. However, the disease is often only discovered at a stage where metastases are already present, and then, after the primary surgical procedure, follow-up drug or radiological treatment is necessary. The new data have been used to make a more detailed classification of metastatic disease stages, making it possible to plan and carry out therapy in an even more targeted manner. Prof. Dr. med. Jörg Beyer, co-initiator of the study project and first author of one of the two publications of the IGCCCG Update Consortium, estimates, “In many cases, we may be able to administer medication a little more selectively. At the same time, we have an increased certainty that we will not miss any case with an aggressive progression. And with the new classification, the benefits for the patient are twofold: A reduced treatment burden with respect to chemotherapy and increased certainty in terms of outcome.”

Previous treatment guidelines were based on data from 1975 to 1990 involving a total of 5862 patients. The new study compared these results with more recent data from 1990 to 2013 and a larger number of patients. The International Germ-Cell Cancer Collaborative Group Update research consortium (IGCCCG Update Consortium) examined data from 30 medical centers in 17 countries (Australia, Europe, Russia and America). The study included documentation of 12,149 patients with metastatic testicular cancer. Particular attention was paid to potential criteria that could help refine classification.

And another piece of good news: Better prognosis for testicular cancer patients

Compared with the original data, the new study results revealed that the prognosis has improved significantly in all cases. In the “good prognosis” classification, 5-year survival increased from 86% to a new 95%. And in the “intermediate prognosis” group, this value increased from 72% to 88%. The improvement was most impressive in the group with widely metastasized disease and the poorest prognosis: 5-year survival increased from 48% to 67%. Prof. Dr. med. Daniel Aebersold, Chairman of the Board of UCI University Cancer Center Inselspital, adds, “The study impressively demonstrates the progress made in cancer therapy. In just well over twenty years, it has been possible to significantly improve the prospects of a long-term tumor-free life after a testicular cancer diagnosis.”