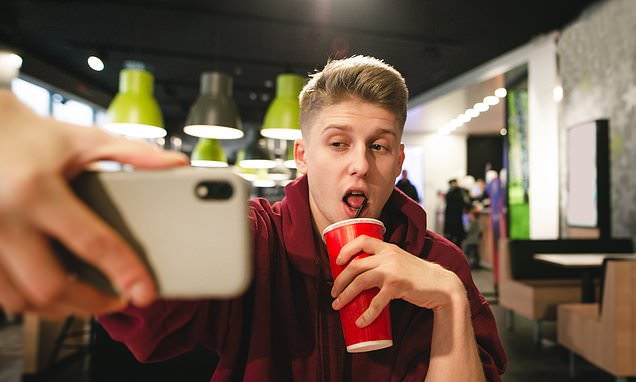 Teens drink more sugar and caffeine every hour they spend on screens, raising risks of diabetes and obesity, study finds

Teenagers who spend hours in front of screens are more likely to guzzle fizzy and energy drinks, according to new research.

Just three hours a day of TV raised the risk of exceeding health guidelines for sugar and caffeine intake by up to a third.

And each hour of talking on a mobile phone or using social media was also associated with going above both recommended limits.

Being hooked on electronic devices – including smartphones, tablets and TVs – is directly linked to their consumption of sweetened beverages, warned scientists. 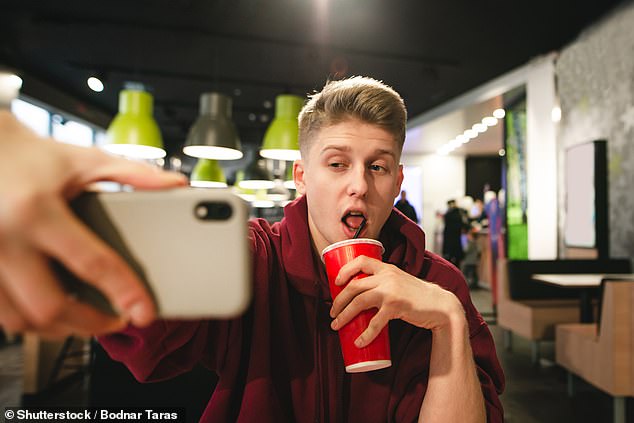 Every hour of social media, smartphone or TV time raised the risks that teenagers would drink more than the recommended amount of sugar and caffeine, a new study finds

Lead author Dr Katherine Morrison, a pediatrician at McMaster University, Hamilton, Ontario, said: ‘There is a trend towards reduced energy drink and soda consumption between 2013 and 2016 which is our latest data.

‘But greater electronic device use, particularly TV, is linked to more consumption of added sugar and caffeine among adolescents.’

She added: ‘Addressing this through counselling or health promotion could potentially help.’

Dr Morrison described the findings as a ‘concern’.

Her team analyzed data on 32,418 schoolchildren aged between 13 and 15 taking part in a health survey across the US.

Too much caffeine, as found in energy drinks, can cause headaches, high blood pressure, nausea, vomiting, diarrhea, chest pain and poor sleep.

The American Academy of Pediatrics and the Canadian Pediatric Society have urged doctors to advise youngsters and families about the risks – and not to buy them.

More than three quarters of British teenagers spend more than two hours on screens daily. In the US, teenagers spend an average of nine hours a day looking at screens, according to Pew Research.

The World Health Organization and the American Academy of Pediatrics recommend that kids younger than 18 months old spend no time in front of screens, that those between two and five should get just an hour a day – ideally alongside adults.

For teenagers, the US doesn’t have explicit guidelines.

England has no screen time guidelines, but in Canada less than two hours a day is recommended.

An additional hour per day of TV was linked to a 32 percent higher risk of exceeding World Health Organisation (WHO) recommendations for sugar.

Children between two and 18 should eat fewer than six teaspoons of added sugar per day. That’s about 25 grams of sugar or 100 calories.

Each hour more per day of TV was also linked to a 28 percent increased risk of exceeding WHO caffeine recommendations.

These state adolescents aged 12 to 18 should cap daily caffeine intake at 100 mg – the equivalent of about one cup of coffee or two cups of tea.

The study published in PLOS ONE found 27 and 21 percent of the participants exceeded the recommended consumption of sugar and caffeine, respectively.

Boys got through more fizzy drinks than girls – and 13 year olds had more than 15 year olds.

It reviewed data from 30 surveys and found almost all linked piling on the pounds to the ’empty calories’ in the beverages.

In the UK, one in three children are overweight by the time they leave primary school, and a fifth obese.

Unhealthy eating and drinking has been found to be linked to adults watching TV alone, Dr Morrison pointed out.

The researchers were surprised to find video game use was only weakly linked to more caffeine consumption.

Added Dr Morrison: ‘Given the marketing campaigns that target video gamers, we expected a particularly strong association between caffeine intake from energy drinks or sodas with video game use, but TV was linked more strongly.’

But using a computer for school was linked to a lower likelihood of exceeding sugar consumption cut offs.