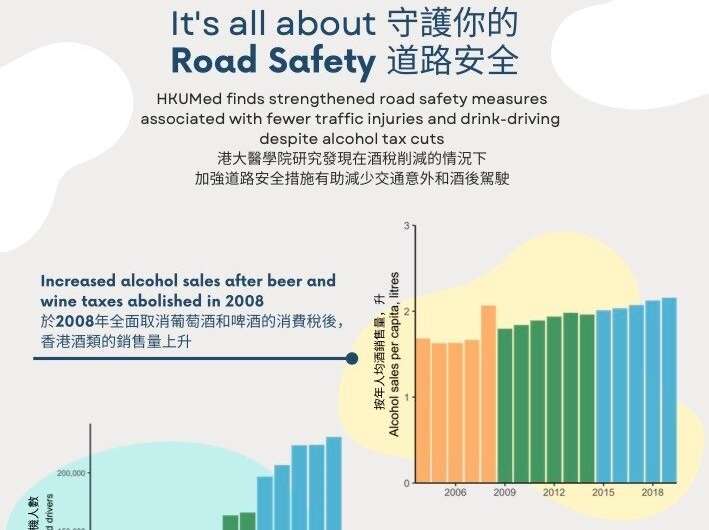 A study led by researchers from the Division of Health Economics, Policy and Management of the School of Public Health, LKS Faculty of Medicine at The University of Hong Kong (HKUMed) found that strengthened road safety policies were associated with reductions in road traffic injuries and drunk-driving while taxes on beer and wine were eliminated in 2008. The study also identified a sustained decline in road traffic injuries linked to increased police traffic enforcement after 2014. The findings are now published in the journal Addiction.

Hong Kong cut excise taxes on wine and beer by half in February 2007 (from 80% and 40% respectively to 40% and 20%) and eliminated the taxes altogether in February 2008, leading to a steady increase in alcohol sales in Hong Kong over the last 15 years. Shortly afterwards, the Legislative Council of the Hong Kong Special Administrative Region (HKSAR) enacted strengthened road safety measures in June 2008 (“Road Traffic Legislation (Amendment) Bill 2008”) to counter drunk-driving. This legislation empowered police officers to conduct random breathalyzer tests and increased penalties for drunk-driving. The research team examined the short- and long-term effects of implementing these road safety policies amid an abolition of most alcohol taxes in Hong Kong.

The study examined 15 years of monthly traffic data from the police and transport authorities of Hong Kong and Singapore. Singapore was used as a comparison because the two former British colonies share similar historical, socio-economic and cultural backgrounds as well as low patterns of vehicle ownership and alcohol consumption during the study period.

Cases of drunk-driving and collisions involving drunk-driving in Hong Kong per annum also showed significant declines following the 2008 road safety legislation with the number of drunk-driving prosecutions dropped by 63.6%, and drivers found to have exceeded the blood alcohol concentration levels also diminished by 21.9%. This was partly made possible by the steady increase in the number of drivers breathalyzed by the police from 39,764 in 2008 to 73,915 in 2009, and subsequently to 230,770 in 2017. The study also found that traffic law enforcement actions, such as issuing illegal parking tickets, rose sharply in from 1.6 million in 2014 to 2.6 million in 2018. This increased police visibility and enhanced law enforcement are likely to create a deterrent effect leading to sustained declines in road traffic injuries, particularly serious and fatal ones, which reduced by 12.4% per year after 2014. By contrast, no significant changes were found in Singapore over the same period.