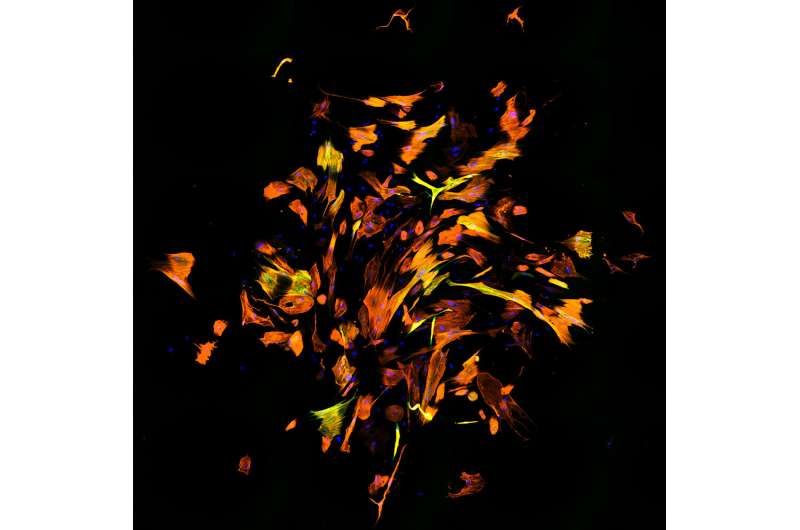 Scientists at the UNC School of Medicine have made a significant advance in the promising field of cellular reprogramming and organ regeneration, and the discovery could play a major role in future medicines to heal damaged hearts.

In a study published in the journal Cell Stem Cell, scientists at the University of North Carolina at Chapel Hill discovered a more streamlined and efficient method for reprogramming scar tissue cells (fibroblasts) to become healthy heart muscle cells (cardiomyocytes). Fibroblasts produce the fibrous, stiff tissue that contributes to heart failure after a heart attack or because of heart disease. Turning fibroblasts into cardiomyocytes is being investigated as a potential future strategy for treating or even someday curing this common and deadly condition.

Surprisingly, the key to the new cardiomyocyte-making technique turned out to be a gene activity-controlling protein called Ascl1, which is known to be a crucial protein involved in turning fibroblasts into neurons. Researchers had thought Ascl1 was neuron-specific.

“It’s an outside-the-box finding, and we expect it to be useful in developing future cardiac therapies and potentially other kinds of therapeutic cellular reprogramming,” said study senior author Li Qian, Ph.D., associate professor in the UNC Department of Pathology and Lab Medicine and associate director of the McAllister Heart Institute at UNC School of Medicine.

Scientists over the last 15 years have developed various techniques to reprogram adult cells to become stem cells, then to induce those stem cells to become adult cells of some other type. More recently, scientists have been finding ways to do this reprogramming more directly—straight from one mature cell type to another. The hope has been that when these methods are made maximally safe, effective, and efficient, doctors will be able to use a simple injection into patients to reprogram harm-causing cells into beneficial ones.

“Reprogramming fibroblasts has long been one of the important goals in the field,” Qian said. “Fibroblast over-activity underlies many major diseases and conditions including heart failure, chronic obstructive pulmonary disease, liver disease, kidney disease, and the scar-like brain damage that occurs after strokes.”

In the new study, Qian’s team, including co-first-authors Haofei Wang, Ph.D., a postdoctoral researcher, and MD/Ph.D. student Benjamin Keepers, used three existing techniques to reprogram mouse fibroblasts into cardiomyocytes, liver cells, and neurons. Their aim was to catalogue and compare the changes in cells’ gene activity patterns and gene-activity regulation factors during these three distinct reprogrammings.

Unexpectedly, the researchers found that the reprogramming of fibroblasts into neurons activated a set of cardiomyocyte genes. Soon they determined that this activation was due to Ascl1, one of the master-programmer “transcription factor” proteins that had been used to make the neurons.

Since Ascl1 activated cardiomyocyte genes, the researchers added it to the three-transcription-factor cocktail they had been using for making cardiomyocytes, to see what would happen. They were astonished to find that it dramatically increased the efficiency of reprogramming—the proportion of successfully reprogrammed cells—by more than ten times. In fact, they found that they could now dispense with two of the three factors from their original cocktail, retaining only Ascl1 and another transcription factor called Mef2c.

In further experiments they found evidence that Ascl1 on its own activates both neuron and cardiomyocyte genes, but it shifts away from the pro-neuron role when accompanied by Mef2c. In synergy with Mef2c, Ascl1 switches on a broad set of cardiomyocyte genes.

“Ascl1 and Mef2c work together to exert pro-cardiomyocyte effects that neither factor alone exerts, making for a potent reprogramming cocktail,” Qian said.