Boy, six, who was born blind is now going DEAF as his family face a race against time to raise £60,000 to find a cure and stop him from slipping into a life of ‘silent darkness’

A boy who was born blind is now going deaf, leaving his family scared that he will slip into a life of ‘silent darkness’.

By the age of three, he went completely deaf in his right ear. And the hearing in his left ear began to deteriorate last year.

His ‘heartbroken’ family are currently learning to use a touch type of sign language -but Cameron is unable to do it himself yet.

Cameron, who has two sisters – Morgan, 10, and three-year-old Indie, is reliant on his hearing to make sense of the world.

His mother described how he loves the sound of his family’s voices and music – particularly drum and bass.

His mother, Carla Golledge, 29, and father Adam Alderman, 32, are in a race against time to help fund research into a cure for Cameron’s hearing loss. Doctors don’t know when Cameron will go completely deaf.

A total of £62,500 needs to be raised by the charity the Norrie Disease Foundation by February 2020 for research to continue at Great Ormond Street Hospital (GOSH). 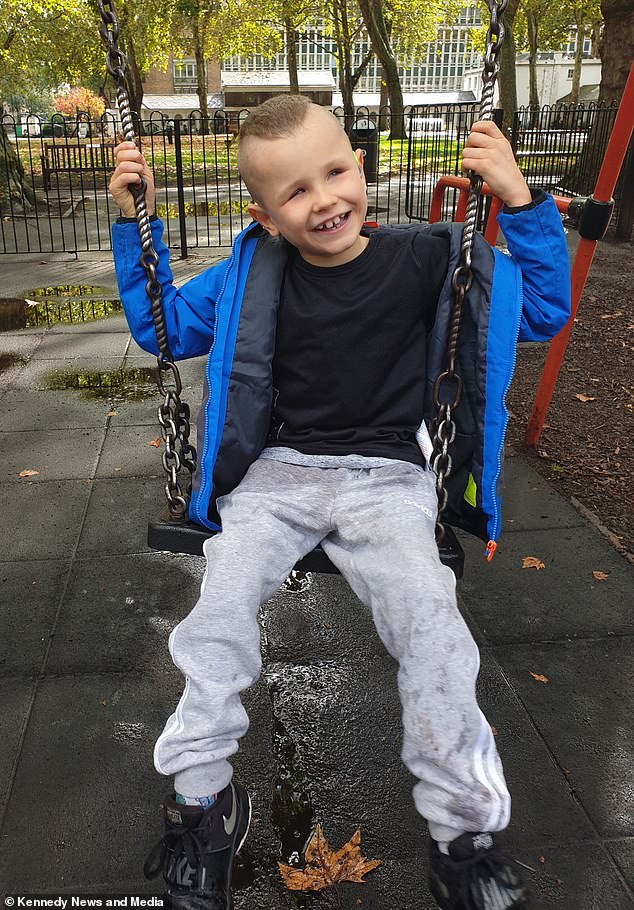 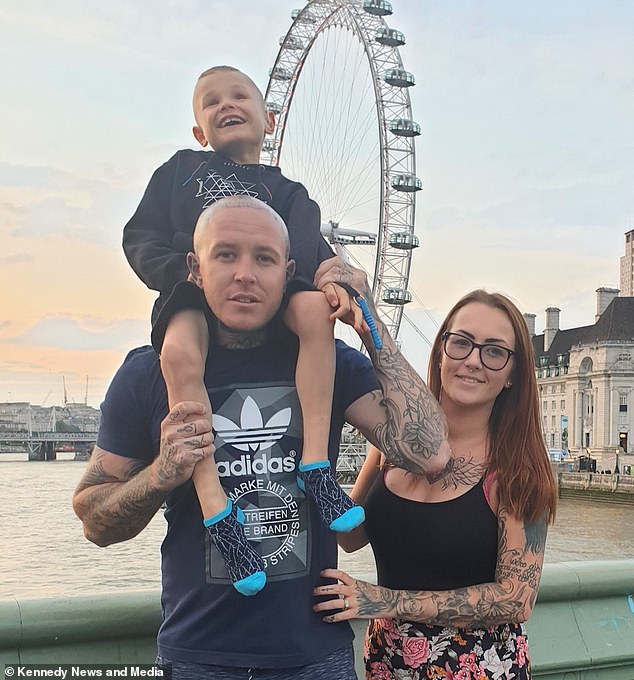 His family, including mother, Carla Golledge, 29, and father, Adam Alderman, 32, are in a race against time to help fund research into a cure for Cameron’s hearing loss – before he is unable to see or hear at all. They are pictured together recently 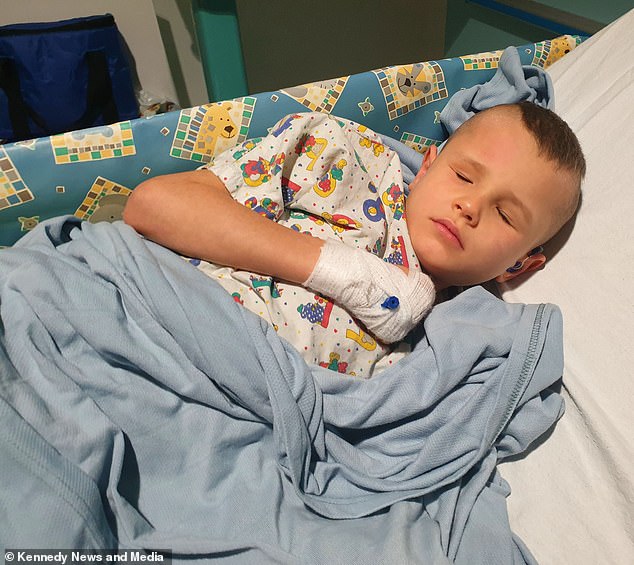 Cameron Alderman is one of just 40 known sufferers of Norrie disease in the UK. He is pictured at Great Ormond Street Hospital having an MRI scan ahead of a cochlear implant

Ms Golledge, from Bristol, said: ‘It’s heartbreaking to stand there as a parent and watch your child go through this.

‘He relies on his hearing massively. When you can’t see, a lot of it is through touch and sound.

‘Everyday we live in fear that our courageous son will be robbed of something else due to this disease.

‘We do try to communicate through a form of sign language that uses touch. Even though he’s unable to make signs himself, we make signs on his body to let him know what’s happening next.

‘Hopefully one day he’ll be able to do it himself as well to tell us things.’

WHAT IS NORRIE DISEASE?

Norrie disease is a rare and incurable genetic condition causing blindness or severe visual impairment from birth due to abnormal development of the blood vessels and tissues at the backs of the eyes.

Many secondary conditions can develop, including progressive hearing loss. It often starts in early childhood. More research is needed to gain a better understanding of this part of the condition.

The flow of blood through the veins is inadequate, causing blood to pool in the legs. Varicose veins and leg ulcers can develop.

The cause underlying the growth and pubertal issues remains largely unknown.

However, it is believed there are probably many more people with Norrie who have not been diagnosed.

Cameron, who was diagnosed when he was eight weeks old, was born with normal hearing – but the family were aware a secondary symptom of Norrie disease is progressive hearing loss.

He also has difficulty standing up and often uses a walker or is pushed in a wheelchair to get around.

Norrie disease is a rare genetic disease that only affects around 500 people worldwide – mostly boys. Cameron is one of just 40 known sufferers in the UK.

As well as visual impairment and progressive hearing loss, it can also cause issues with cognitive development, circulation, delayed puberty and sexual dysfunction.

Ms Golledge said:  ‘Around the age of three he [Cameron] started to lose his hearing, it was horrible to watch.

‘His personality changed. He was getting upset all the time, hitting his ear and never wanted me to leave his side.

‘He didn’t understand what was happening and he was trying to express to us that he was feeling frustrated, but he couldn’t communicate it.

‘He was getting very distressed and he was frightened. I noticed a huge change and it was very difficult for us as a family to watch as he didn’t understand what was happening.’

Cameron was taken back and forth to the hospital for tests.

Ms Golledge said: ‘They did a general anaesthetic and a hearing test which is how we discovered he was losing his hearing. 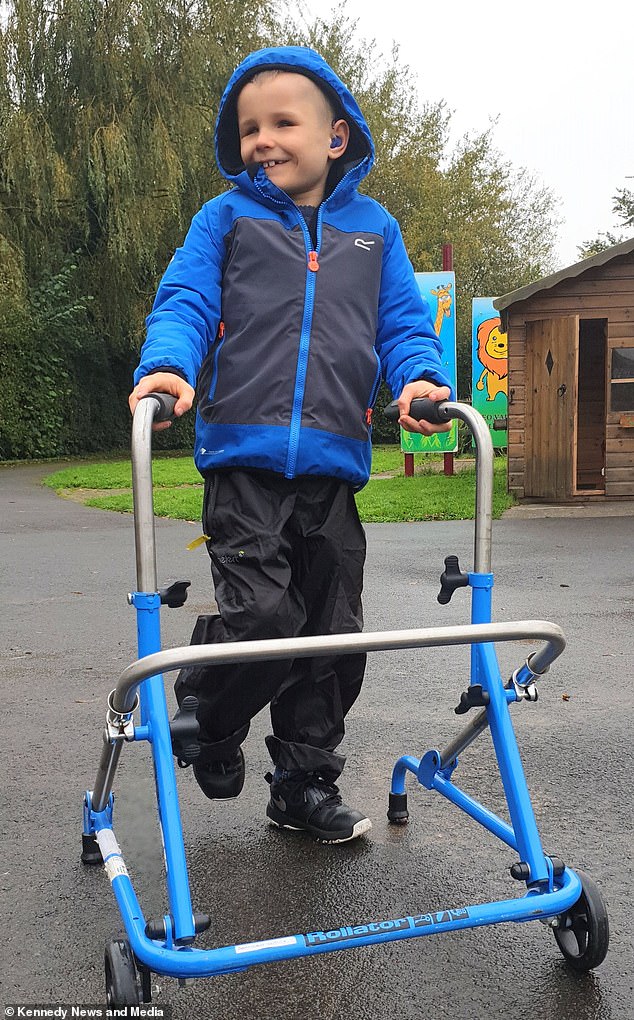 Cameron has always made sense of what’s around him using his hearing. He is pictured with a walker because he has difficulty with his mobility due to Norrie disease 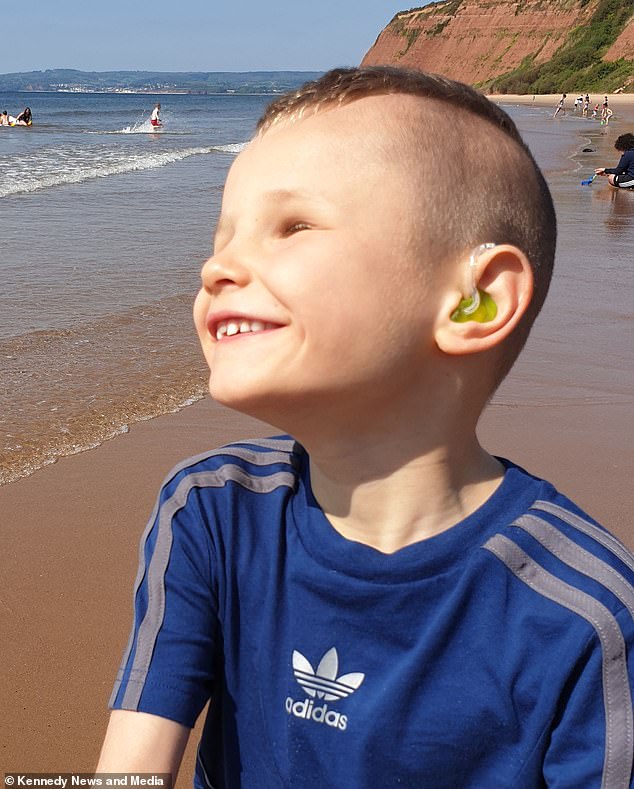 When Cameron’s left ear began to deteriorate last year he then became reliant on a hearing aid to help him (pictured). The hearing in his right ear has completely gone 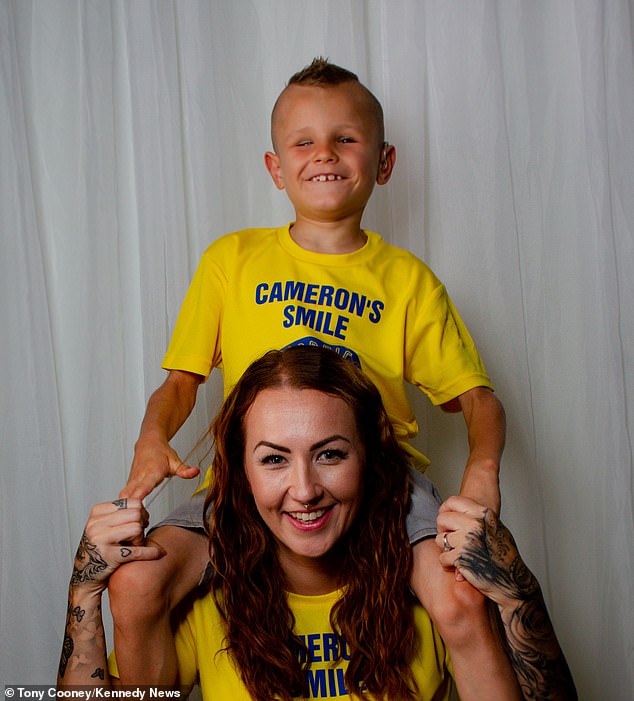 Cameron’s mother Ms Golledge said: ‘It’s heartbreaking to stand there as a parent and watch your child go through this’

‘It was around a year ago that the loss started happening again in his left ear. We want to keep Cameron’s left hearing as long as possible.’

When Cameron’s left ear began to deteriorate last year he then became reliant on a hearing aid to help him.

While he tries to make use of his other senses, he regularly attends appointments at GOSH to kick-start the process for a cochlear implant in his right ear.

Cochlear implants provide some sort of hearing for people who have profound or complete hearing loss that can’t be helped with hearing aids.

The implant will only work if the auditory nerve – which sends sound from the cochlear part of the ear to the brain – works properly. This is tested with various assessments.

If Cameron is fitted with the device, it could help bring his hearing back in his totally deaf ear.

‘He smiles every time he hears Mummy and Daddy’s voices, giggles to his favourite music and is overcome with joy at the sound of his favourite things.

‘He absolutely loves music – it makes him smile. He takes after his dad and loves a bit of drum and bass. 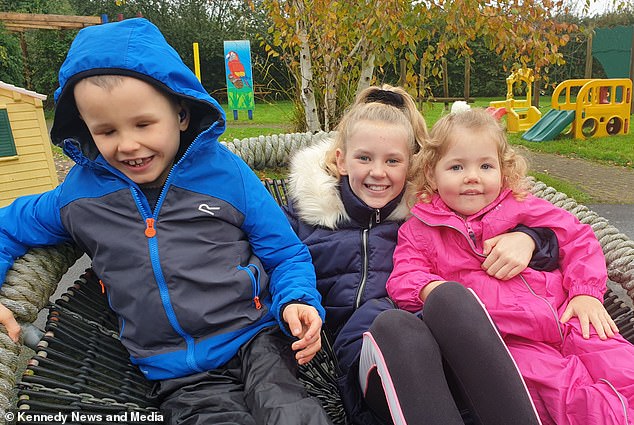 Cameron is able to play with his sisters Morgan, 10, and Indie, three, with the help of his hearing. He also likes listening to his father’s drum and bass music 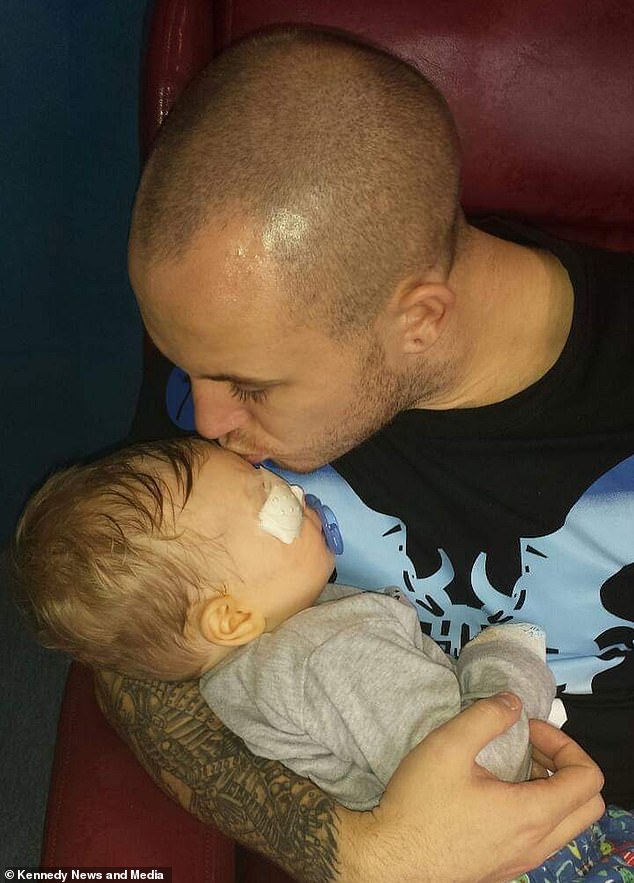 The ‘heartbroken’ family are currently learning to use a touch type of sign language to communicate with Cameron, who is pictured when he was born with Mr Alderman 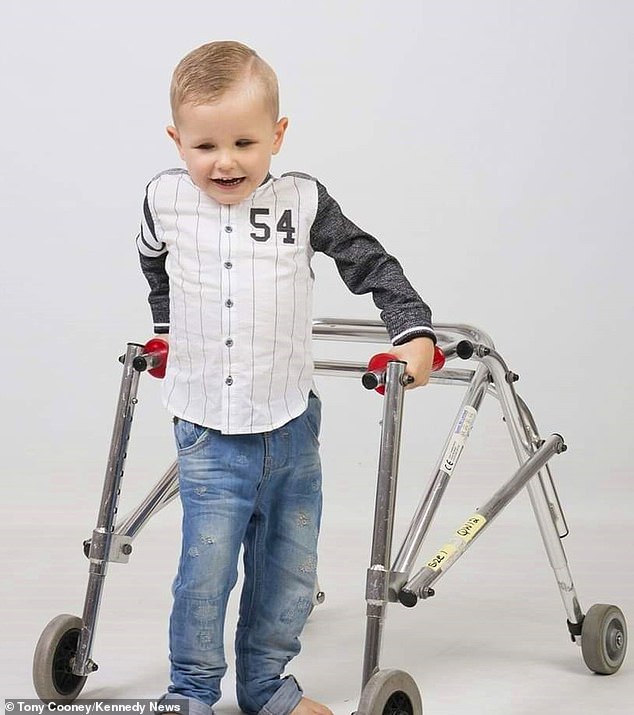 Ms Golledge hopes that research conducted at GOSH with the Norrie Disease Foundation will find a way to slow – or completely stop – hearing loss caused by the disease.

Research into hearing loss at GOSH will not continue unless the Norrie Disease Foundation are able to raise the five-figure sum by February.

Ms Golledge and her loved ones have so far raised £3,000 by doing a charity walk and she plans to aim for another £2,000 when she takes part in a 10K run next year.

She has launched a Virgin Money Giving page where people can donate towards her target ahead of the deadline.

Ms Golledge said: ‘Researchers at GOSH are looking into the progressive hearing loss that comes with Norrie disease and trying to find a way to prevent that.

‘We’re looking to get £2,000 which would go straight to the foundation.

‘They started fundraising at the start of this year and they need to reach £62,500 by February 2020.

‘There’s only about 40 families affected by Norrie disease in the UK and we’ve all been doing our own fundraisers towards that.’

For more information and to donate, visit here. 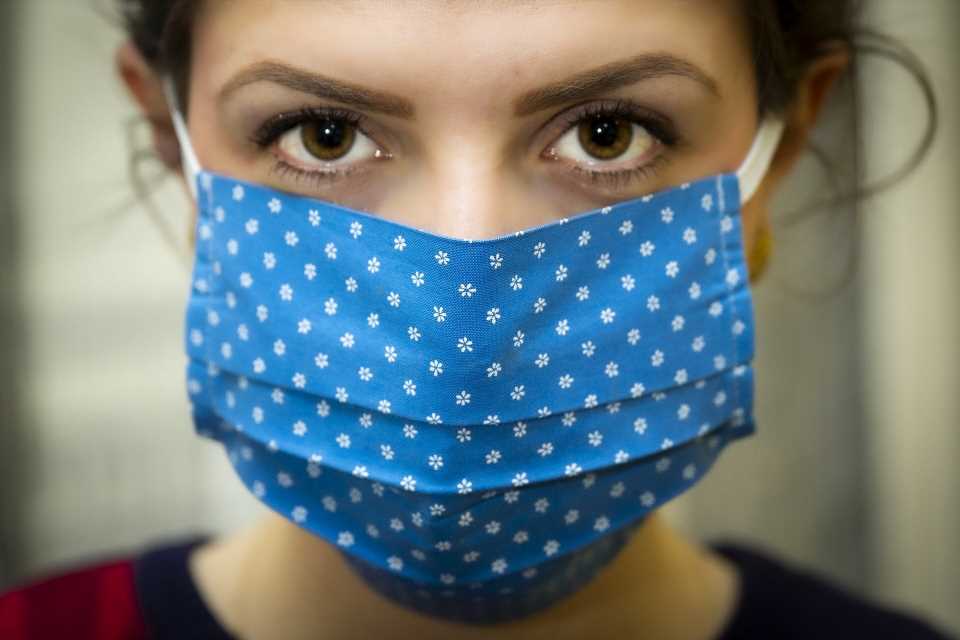 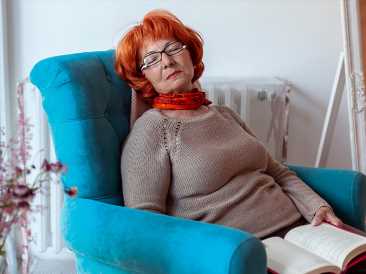 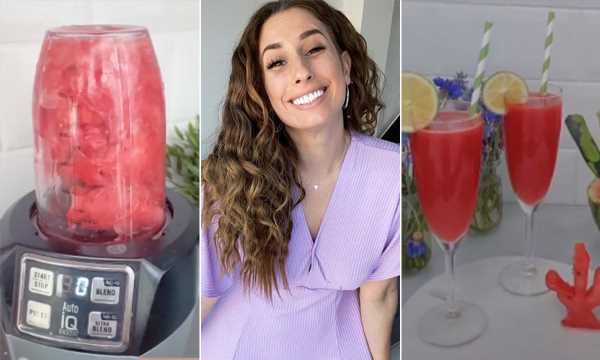