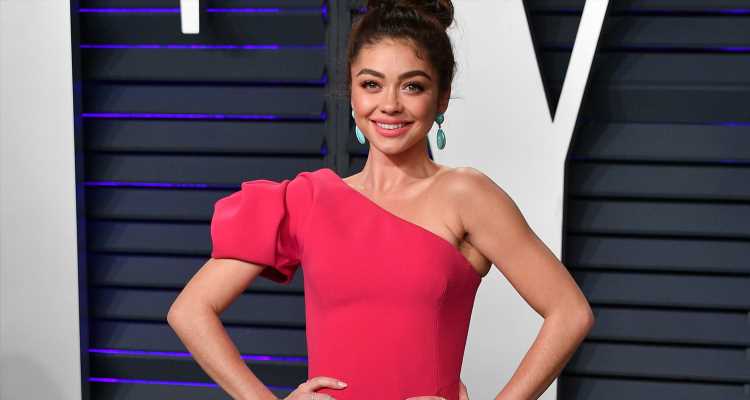 Sarah Hyland, who recently announced her engagement to former US Bachelorette contestant Wells Adams, is looking stronger than ever in a new Instagram post showing her leaving what looks like the gym.

The star captioned the photo, “Not flexing. I’d say it’s the workout but it’s probably just my purse strap pushing on my arm. ?????” Bachelor produce Elan Gale weighed in immediately in the comments, saying, “I would expect @wellsadams right arm to be this ripped, but wow, well done!”

Not flexing. I’d say it’s the workout but it’s probably just my purse strap pushing on my arm. ?????

Not flexing. I’d say it’s the workout but it’s probably just my purse strap pushing on my arm. ?????

While Sarah tried to play off her strength in this post, I’m here to tell you she works damn hard for that muscle. On Instagram, Sarah documents her workouts on a Stories highlight called “Strong>Skinny.” On the reel, she’s shown doing some pretty aggressive pullups, lifting dumbells, doing pushups on a barbell, and crushing “350 deadbugs” and resistance crunches. She’s also seen dancing in a cryotherapy chamber and returning from a cardio barre class.

Sarah’s been open about her strength goals—especially after undergoing her second kidney transplant in 2017. “I love to be STRONG. (I’ll be using that word a lot) Strength is everything. Being strong has gotten me where I am. Both mentally and physically. I am not a fan of ‘being skinny,'” she wrote on Twitter.

Her trainer Chad Landers shared an example of their workout routine with People back in 2016, and TBH, it looked pretty damn hard. It included incline dumbbell chest press, seated machine row, kettle bell deadlift, cable tricep pushdowns, and a move called “stir the pot,” which is a plank where your arms are on an exercise ball, managing the ball’s movement. In between each of these exercises, Sarah does two minutes on the Stepmill for cardio. Phew.

Take credit for those muscles, Sarah, you earned ’em!