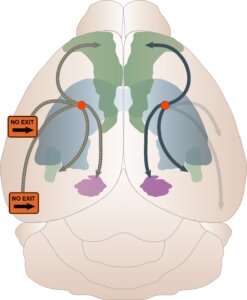 Much like a supply truck crossing the countryside, the misfolded proteins that damage neurons in Alzheimer’s disease travel the “roads” of the brain, sometimes stopping and sometimes re-routing to avoid roadblocks, reports a study published in Science Advances by researchers at Van Andel Institute and University of Pennsylvania.

The findings shed light on how tau proteins, which form tangled clumps that damage brain cells in Alzheimer’s, move through the brain. The study also provides new insights into why some areas of the brain are more vulnerable to damage than other areas.

“While the interconnected structure of the brain is essential to its function, these misfolded proteins commandeer that structure to travel through the brain and cause progressive degeneration,” said Michael X. Henderson, Ph.D., an assistant professor at Van Andel Institute and corresponding author of the study. “By understanding how these proteins travel through the brain and what causes certain neurons to be at risk for damage, we can develop new therapies that can be directed to the right place at the right time to have maximal impact on disease progression.”

Using models of Alzheimer’s disease, the team mapped misfolded tau proteins as they progressed through the brain. They found that tau pathology moved from region to region along the brain’s neural networks, which are similar to biological highways, but that it did not travel to every connected region.

To find out why some areas of the brain seemed to resist the proteins’ spread, the team turned to gene expression patterns.

They identified some genes that were expressed more in regions that had more tau pathology than expected from protein spread alone. By understanding the genetic factors that control protein accumulation in the brain, the team hopes to identify ways to interfere with misfolded protein movement and slow or stop the progression of Alzheimer’s and similar neurodegenerative diseases.