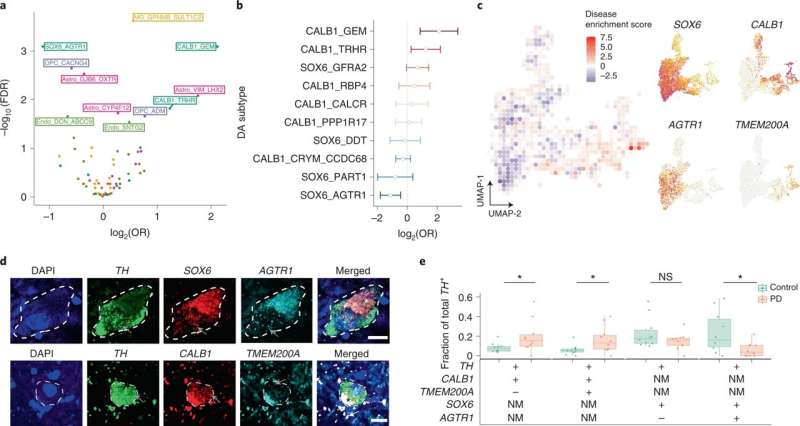 A team of researchers affiliated with several institutions in the U.S. has identified a subtype of brain cells that die in Parkinson’s patients. In their study, published in the journal Nature Neuroscience, the group used a new RNA sequencing technique to analyze brain cells in the substantia nigra and then compared certain types they found in the brains of Parkinson’s patients with unafflicted subjects to identify differences. Ernest Arenas, with the Karolinska Institutet in Sweden published a News & Views piece in the same journal issue outlining how single-cell study of brain cells is conducted and commenting on the work reported by the team on this new effort.

Parkinson’s disease is a progressive neurodegenerative disease—patients experience balance problems, trouble speaking and tremors. There is no cure, but some drugs can reduce symptoms. Prior research has shown that the disease arises when nerve cells in the substantia nigra (located in the midbrain) deteriorate for unknown reasons. As a result, less dopamine is generated. As more of the cells cease functioning, symptoms worsen. In this new effort, the researchers took a closer look at the nerve cells in the substantia nigra to find out which of them die in Parkinson’s patients.

The researchers used a recently developed single-cell RNA technique that sequences individual cells in a given tissue sample. The researchers used it to determine which genes in cells in the substantia nigra were producing proteins and then categorized them into 10 subtypes.