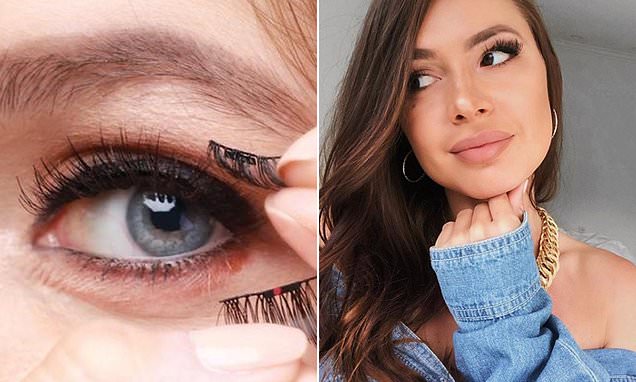 Radiologists have warned wearing magnetic eyelashes during MRI scans could be dangerous.

Magnetic eyelashes – one of the most searched beauty trends – are attached with tiny magnets instead of glue.

Researchers put a few pairs of the false lashes through tests, only to discover they destroyed the images.

The magnetic force could also rip the lashes from the eye, putting the patient’s safety at risk, tests suggest.

The team have called for the lashes to be added to list of banned items for the common procedure, alongside jewellery and medical items.

MRI scans, used to detect a variety of conditions of the brain such as tumours, swelling or developmental problems, work by producing strong magnetic fields. 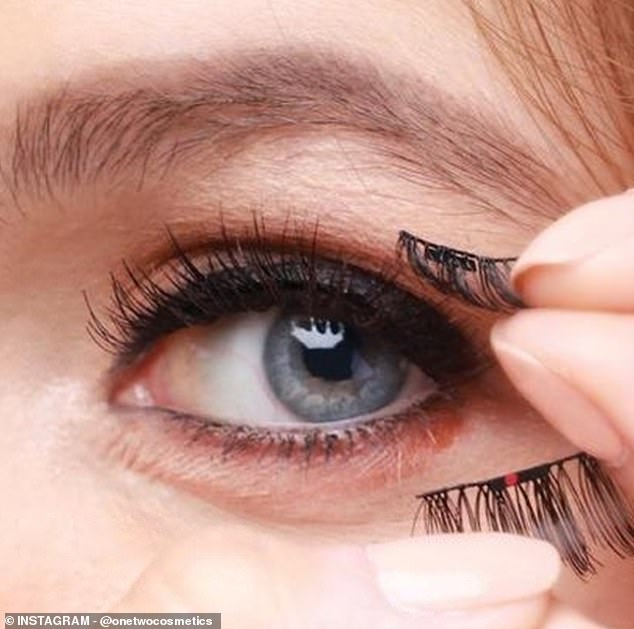 Magnetic eyelashes attach to the lashes with tiny magnets instead of glue for a cleaner application, but could be dangerous in an MRI scan 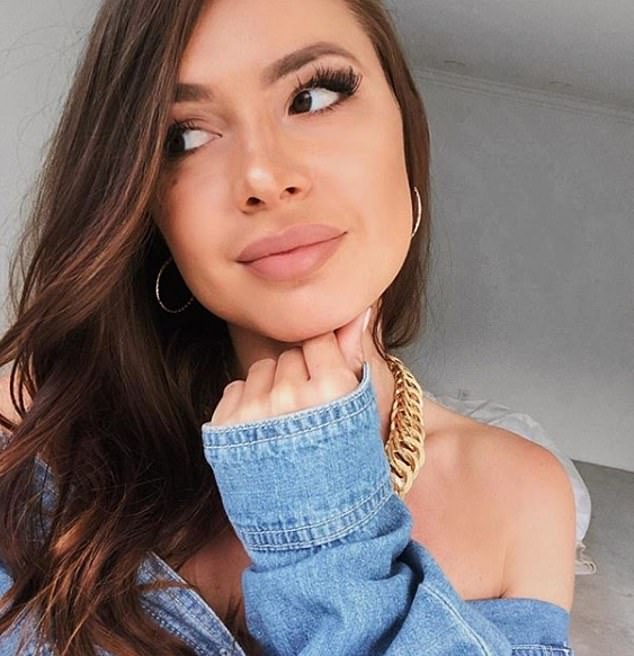 Instagrammer @kristinakacheeva, who has 35,000 followers, demonstrates the glue-free magnetic lashes

Scanners tend to have a magnetic strength of between 1.5 and 3 Tesla – in contrast, the power of a fridge magnet is just 0.005 Tesla.

For this reason, patients are explicitly warned to remove all metal objects from their body, including watches, jewellery, piercings, dentures and hearing aids.

If precautions aren’t taken, the scanner could draw objects towards it, warned the experts at Penn State Health Milton S. Hershey Medical Center.

This has led to people becoming pinned to the machine and even causing death in extremely rare freak accidents.

The radiologists, led by Dr Einat Slonimsky and Dr Alexander Mamourian, said: ‘We strongly recommend inserting a line about magnetic eyelashes on the MRI safety questionnaire and adding stops in the screening system to prevent the entry of anyone with these lashes, including staff, into the MRI scanner room.’

The lash kits work in two parts, with one false lash above and the other below your natural lashes which snap together.

Brands such as One Two Lash, founded by entrepreneur Katy Stoka from Miami, Lash FX and Ardell Lashes say the bespoke lashes can be used over and over again. 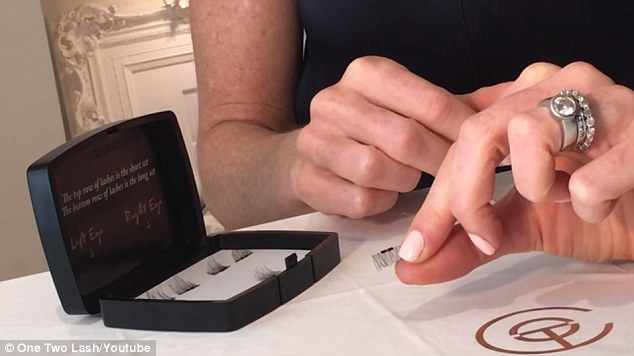 Lashes such as those sold by One Two Cosmetics can we worn multiple times. But researchers put a few pairs of the falsies through tests and found they destroyed MRI images 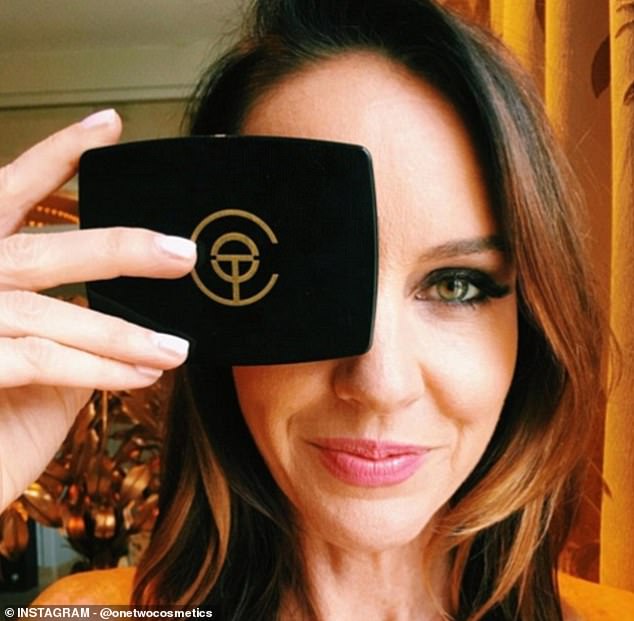 Magnetic forces from the MRI scanner could rip the lashes from the eye, putting the patient’s safety at risk, tests suggest. Pictured, One Two Cosmetics on founder Katy Stoka’s eye 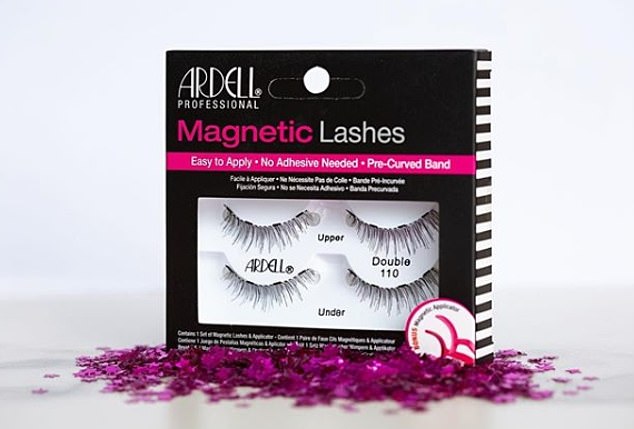 The mess-free alternatives to glue-on eyelashes are popular, the researchers said, based on Google trends. Pictured, Ardell Lashes sold in the UK

Researchers based at the center’s radiology department attached some magnetic lashes to a test device called a phantom.

The cylindrical object is designed to reflect how human tissue would respond in imaging procedures.

They measured how the lashes coped compared to aneurysm clips, objects used to treat brain aneurysms but not allowed into an MRI scan.

Compared to the clips, the magnetic eyelashes damaged the image more, obscuring the entire phantom.

The eyelashes stayed on the phantom during scanning. But when the phantom was removed out of the scanner, one set of eyelashes detached due to magnetic forces.

The mess-free alternatives to glue-on eyelashes are popular, the researchers said, based on Google trends.

‘Although our staff had little to no awareness of the existence of magnetic eyelashes, The Wall Street Journal reported that instruction on their use and application was the top trending beauty-related search on Google in 2018,’ the authors wrote.

In the American Journal of Roentgenology, they warned radiologists should be aware of the magnetic eyelashes to inform patients of the risks.

There’s currently no evidence that anyone has been seriously harmed from magnetic eyelashes during an MRI scan, the researchers said.

They added: ‘Although we tested only one kind of magnetic eyelashes, it is reasonable to assume that all such lashes will behave in this manner, producing either somewhat less or somewhat more magnetic field distortion, and that all will be attracted to the static magnet.’

WHAT IS A MAGNETIC RESONANCE IMAGING (MRI) SCAN?

Magnetic resonance imaging (MRI) is a type of scan that uses strong magnetic fields and radio waves to produce detailed images of the inside of the body.

An MRI scanner is a large tube that contains powerful magnets. You lie inside the tube during the scan.

An MRI scan can be used to examine almost any part of the body, including the brain and spinal cord, bones and joints, breasts, heart and blood vessels and internal organs – such as the liver, womb or prostate gland.

Magnetic resonance imaging (MRI) is a type of scan that uses strong magnetic fields and radio waves to produce detailed images of the inside of the body. An MRI scanner is a large tube that contains powerful magnets. You lie inside the tube during the scan

The results of an MRI scan can be used to help diagnose conditions, plan treatments and assess how effective previous treatment has been.

Most of the human body is made up of water molecules, which consist of hydrogen and oxygen atoms. At the centre of each hydrogen atom is an even smaller particle, called a proton. Protons are like tiny magnets and are very sensitive to magnetic fields.

When you lie under the powerful scanner magnets, the protons in your body line up in the same direction, in the same way that a magnet can pull the needle of a compass.

In the same way that millions of pixels on a computer screen can create complex pictures, the signals from the millions of protons in the body are combined to create a detailed image of the inside of the body.